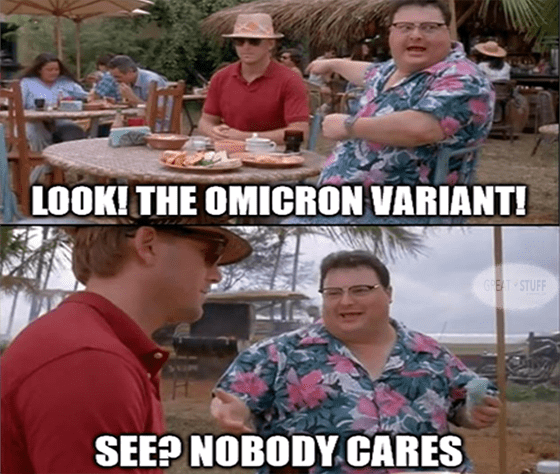 A Little Dash’ll Do Ya?

It’s been, what … less than a week since COVID-19 Omicron debuted, and I’m already tired of it. And I’m sure you’re tired of hearing about Omicron as well, Great Ones.

Wall Street is also tired of it, apparently, as stocks attempted to push sharply higher today. But, as resilient as the market bulls have been of late, those early morning gains fizzled a bit. It’ll be interesting to see which dies out first: market bulls’ determination or COVID-19.

No, I’m not going into another broad-market diatribe like yesterday. You don’t need two of those rants in a row. But I needed something to get the juices flowing … kinda like DoorDash (NYSE: DASH). How’s that for a transitional lead in? 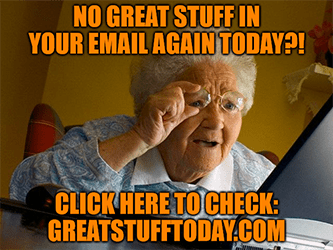 Unlike DoorDash, however, I didn’t have an analyst upgrade to lift me outta the pre-coffee sludge this morning.

Bright and early, Gordon Haskett Research Advisors put DoorDash on fleek. Does anyone say “fleek” anymore? No? Whatever…

So, Gordon Haskett upgraded DASH stock from hold to buy and reiterated its price target of $217.

Why? Because Haskett believes that Omicron will boost customers’ desire for delivery once again:

We believe the recent share price pullback offers a compelling re-entry point – especially in the Omicron backdrop, which could lead to (1) upward [gross order value] revision (could drive an increase in consumer aversion to dining out in the near-term) and (2) multiple expansion (flight to COVID-safe names).

Now, Great Ones, I find this line of reasoning utterly hilarious.

I mean, it’s not really founded in fundamentals at all. Even during the height of the pandemic, during the lockdowns, during that monthslong period of sheltering at home … even during this period where DoorDash should’ve utterly cleaned house … it couldn’t turn a profit.

Read that again. During a period where everyone was trapped at home, a company specializing in delivering food to your house couldn’t make a profit.

It wasn’t that DoorDash didn’t see increased demand — it did. It saw a $&^%-ton of demand. DoorDash just couldn’t figure out how to turn that demand into a profit. 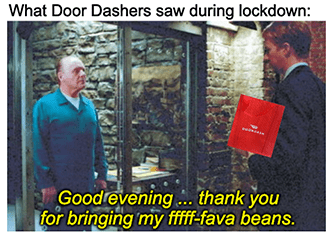 I get it. DoorDash is a startup. It’s still growing and spending on that growth.

But the company had to know that demand would fall off once the lockdowns were over. It had to know that it would need to find some kind of equilibrium after the home-arrest period of the pandemic was over.

But it didn’t find any, as every single quarterly report since DoorDash went public proves.

What’s more, Haskett is ignoring a massive problem for DoorDash. If the company couldn’t make a profit when wages were low, how will it turn a profit amid the Great Resignation?

But DoorDash made its name by not doing any of those things. In fact, the company thrives off paying low wages — it’s why DoorDash, Uber Eats, et al. fought so hard against California’s workers’ rights bill.

Did you consider that labor costs are rising significantly for DoorDash, Haskett?

The sad thing is … Haskett is right. DASH stock will likely rally nicely if Omicron becomes a significant issue and prompts more people to stay home and order out. But the stock won’t rally because of higher profits. What am I saying? Any profits.

DASH stock is gonna rally because of Wall Street’s bullish determination. And this says more about Wall Street than it does about DoorDash.

I swear, investing right now is like watching America’s Got Talent. You can almost pick the winner from the get-go just from watching those personal, tragic backstories. Talent doesn’t really matter, just like fundamentals.

Don’t BOX Me In, Man

Big earnings beats? From Box (NYSE: BOX)?! It’s more likely than you think: The cloud-computing company lets you store and share files with coworkers online. Box also makes it surprisingly easy to just … delete literally everything you’ve ever saved, but I digress. There’s no bitterness here, no sir.

The remote-work boom is a boon in Box’s bonnet, and the busy bee just bested both top- and bottom-line earnings estimates. Revenue grew 14% to $224 million and beat expectations for $218.6 million. It’s not the most brilliant growth the cloud sector has ever seen … but it’ll do, Box. It’ll do.

Earnings totaled $0.22 a share and conveniently beat estimates by a penny. Oh, happy days. If you could only see me dancing ‘round my office in excitement. A whole penny? Neat … so why is Box up a whole 11% today?

‘Twas guidance and Box’s unyielding optimism (for once) that put it on the Street’s nice list. Box now expects to make between $868 million and $870 million for fiscal 2022, which edges by analysts’ targets of $858.5 million by a hair. Can you say: Double beat and raise? Of course you can!

You know the drill by now, Great Ones. Don’t let Box’s lofty, cloudy dream of a report lure you into chasing the rally — we don’t do that here. Sure, the data storage, analytics and refining biz is booming … but it’s not just Box that’s bankrolling on its clouds.

Because without this technology … everything else is dead in the water. Click here to find out more! 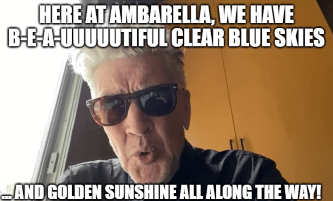 Ambarella (Nasdaq: AMBA) made it rain (it made it rain) this morning after the camera-on-a-chip company reported third-quarter sales that came in well above Wall Street’s estimates.

Per-share earnings were $0.57 on sales of $92.2 million versus expected earnings of $0.49 per share on sales of $90.3 million. Even better, this marks Ambarella’s fourth straight quarter of accelerating earnings growth year over year.

Of course, Wall Street doesn’t only care about a company’s performance at the end of each quarter — oh nay nay! That would be too simple. Earnings also come down to those forward-looking sales projections companies have to report … à la divination?

Lucky for Ambarella investors, the company delivered on that front as well: The semiconductor superstar raised its forward guidance and expects fourth-quarter revenue in the range of $88.5 million to $91.5 million.

With a report like that, it’s clear skies and little chance of rain for Ambarella’s stock. You can pack up your umbrella, ella, ella: AMBA is up 23% on the day. 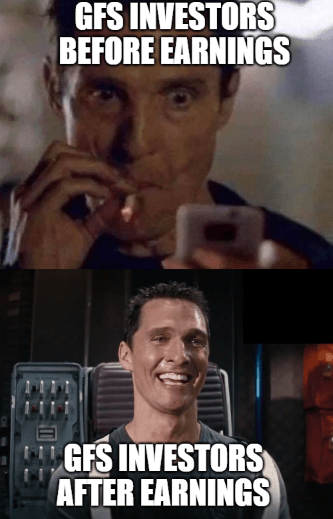 Great Ones, you’ll be happy to know that I’ve had breakfast today and can finally talk chip stocks without going down the food-for-thought rabbit hole. I know, I know … it’s like I’m a real adult or something.

Anyway, rounding out our roundup is semiconductor fabricator GlobalFoundries (Nasdaq: GFS), which just released its first-ever earnings report as a publicly traded company. Aww, how cute.

GlobalFoundries isn’t like most other semiconductor companies in that it can make very high-end tech chips but specializes in lower-end tech chip production. It also doesn’t design its own chips. Instead, it makes chips for other companies that don’t have their own fabrication plants — fancy!

This business model seems to be working well for GlobalFoundries, which reported a 56% jump in third-quarter revenue thanks, in part, to the ongoing chip shortage.

With no end in sight to this semiconductor slowdown, GlobalFoundries is in a unique position to serve lots of potential customers that are clamoring for chips, such as the hordes of chip-hungry automakers out there. I guess one company’s chip shortage is another’s golden goose … or something like that.

In response to all this positively, Wall Street rewarded GFT investors and pushed GlobalFoundries up by 6%. Not too shabby for a first-ever trip into the earnings confessional, eh?

Plus, you can bet that everyone and their mother was just waiting for some news — any news — that the semiconductor supply might start a-flowing once more, which would help out literally every company or technology that needs chips.

Take lidar, for instance. Almost every car company is betting on this new tech: Audi alone is investing $16 billion … GM, $27 billion through 2025. BMW? $35 billion. In fact, Google, Amazon, Apple and even the U.S. Army are investing in it.

It’s that time again, Great Ones! Time to make like a novel and book it over to the Poll of the Week.

We’re long overdue to gather ‘round the virtual watercooler for last week’s poll results. And not to spoil the surprise, but we have a brand-new question percolating for your pondering minds too. How about that!

So, enough pitter-patter, let’s cut the chitter-chatter and get at ‘er. Amid last week’s festivities and pre-festivities, we wanted to know one thing and one thing only: How comfortable are you with ol’ Elon Musk manning our planetary defenses?

And you still make fun of people who shoot at hurricanes … hmmph!

The results are in, Great Ones. 46.3% of you said: “Hell no, I’ll take my chances with the asteroid,” while another 42.6% of you sleep soundly in the knowledge that Papa Musk will protect you.

Curiously, 7.4% of you have your own anti-asteroid equipment at the ready, and I’m dying to know what that means. (That’s not a defense system — this is a defense system!)

And last but not least, 3.7% are ready to make like E.T. and phone home, leaving this world behind altogether. Ahh, readers after my own heart! 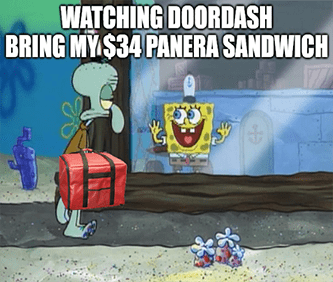 But enough of those extraterrestrial terrors. There’s a new disaster in the making right here on Earth, and it’s coming to a doorstep near you … as long as DoorDash didn’t go to the wrong place again.

Now, throughout our pandemic coverage (and roasting) of DoorDash, many of you chimed in to tell us about your own experiences and misadventures with the delivery app.

So today, we’re switching gears and keeping those investor hats firmly on.

Unless you skimmed through the rest of today’s Greatness — the nerve! — you’re mighty aware of my take on DoorDash stock.

But I want to hear your opinions on the stock as well. Your DoorDashboard Confessional, if you will.

Since DoorDash totally thrived all pandemic long … in analysts’ eyes, at least … do you believe the hype about DoorDash rebounding during the Omicron breakout?

While you’re at it, let me know why you chose what you chose! Can’t just leave your poll answer left unexplained now, can we?

Tell me all your thoughts on DoorDash, the chip crunch (or crunchy chips) and the highfalutin world of cloud-computing stocks. Or, barring all that, simply pretend we asked you the one perfect question to kick off that rant that’s been living in your head rent-free. 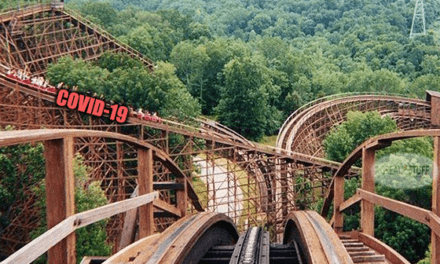 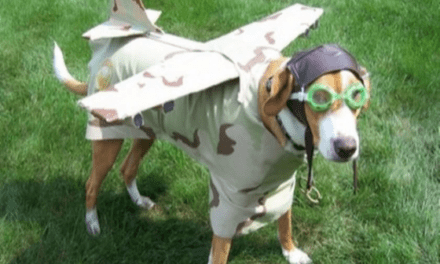