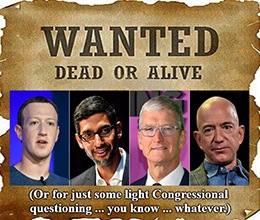 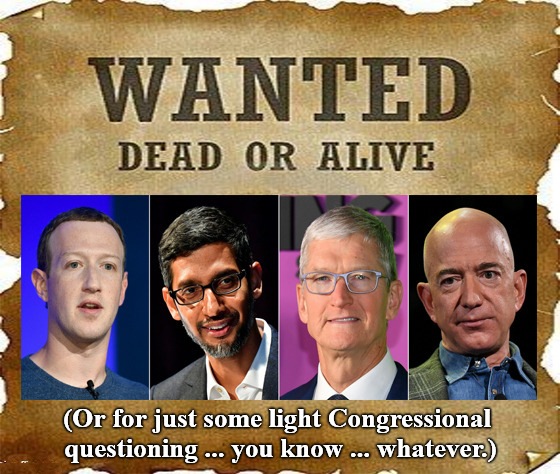 You Spin Me Round

There’s so much going on — so much you need to know — that it’s hard to keep up. After weeks of the same ol’, same ol’, 2020 dumped a veritable ton of information all in one day.

And we’re not just talking the 272 companies reporting earnings today. No sir!

First up, we’ve got a monetary policy statement from the Federal Reserve.

Good ol’ Jerome Powell is expected to flex his muscle as chairman and hold the line. Powell promised to do whatever it takes to fix the economy and keep the market stable. So far, Jerome’s “unlimited stimulus” is working for the market. But as for the average Joe … that remains to be seen.

I didn’t expect anything new from today’s Fed statement, and I wasn’t disappointed.

Next, we have the Big Tech antitrust hearing on Capitol Hill. CEOs from the four biggest tech companies — Amazon, Apple, Alphabet and Facebook — were grilled by the House Judiciary Antitrust Subcommittee today.

Congress reportedly has more than one million documents related to its antitrust investigation, and it wants answers. I imagine the exchange going something like this:

Congress: Big Tech, did you create a monopoly?

Congress: I think we’re entitled to them.

Congress: We want the truth!

Congress, we live in a world ripe with technology and profit, and that profit has to be guarded by companies with gigabytes of personal data. Who’s gonna do it? You? You, Rep. Cicilline? We have a greater responsibility than you can possibly fathom.

You weep for “freedom of speech” and data privacy and you curse Big Tech. You have that luxury. You have the luxury of not knowing what I know — that data privacy’s death, while tragic, probably saved profits.

And our existence, while grotesque and incomprehensible to you, saves profits.

It clearly wasn’t that dramatic … I don’t think. But one can dream…

Big Tech’s real approach centered on pushing how satisfied its customers are, and how many jobs it provides for the U.S. economy. Fair points, but when Amazon.com Inc. (Nasdaq: AMZN) CEO Jeff Bezos whipped out internal poll numbers for Amazon’s brand, I was inclined to call bull$#%&…

(Bless me, sorry about that. I don’t know what came over me.)

In the end, Congress will do very little. It simply can’t act right now. The House and the Senate are divided along party lines.

All I know is that, to me, you look like you’re having fun. Open up your portfolio arms, watch out here volatility comes.

Now, if you’re tired of being spun right round (baby), right round like a record (baby), Great Stuff has your Dramamine right here…

If you want to move in just a little bit closer, take every bit of profit out of both sides of the volatility pendulum, set your sights on One Trade — nothing else will do.

One Trade is the peak form of simple, volatility-beating strategies, letting you spin round (right round) and adjust your bullishness or bearishness on a dime. All that greatness with just One Trade … on one ticker … once a week. No frills, no fuss, no mess, no more tears. 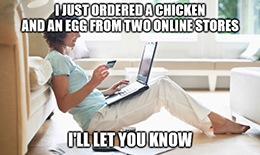 And you thought the dot-com era was the internet’s big “gold rush?” Pshaw.

It’s nothing compared to the e-commerce rush right now. Practically every mom-and-pop operation is moving to online sales during the pandemic. And Shopify Inc. (NYSE: SHOP) shows them how it’s done.

What’s more, Shopify believes that this is just the start of a permanent retail shift toward online platforms. The only hitch in Shopify’s giddyap is the “magnitude and duration” of COVID-19. As such, the company joined hundreds of others in not providing current-quarter or full-year guidance.

If you’ve watched SHOP along with Great Stuff, you know the company is being conservative here. However, real investors don’t chase rallies. Wait for a dip in SHOP or a round of profit-taking before taking the leap.

Better: Micro Is the New Macro 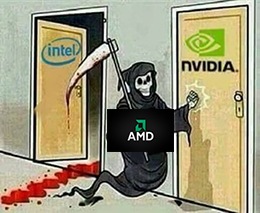 Oh, how the turn tables. With Intel Corp. (Nasdaq: INTC) struggling to cash in its chips, there’s a new king in the semiconductor market: Advanced Micro Devices Inc. (Nasdaq: AMD).

The crown was handed over by default with Intel unable to match AMD in making next-generation seven-nanometer chips. But after last night’s quarterly report, AMD earned its position.

AMD beat the consensus estimates for both earnings and revenue in the second quarter. The company also lifted its outlook for the third quarter and the full year. All this at a time when many companies are afraid to give any hint at all on future performance.

Third-quarter sales are expected to arrive between $2.45 billion and $2.65 billion, compared to Wall Street’s estimate for $2.31 billion. Full-year guidance was lifted to $8.88 billion — up 32% year over year and above analyst expectations for $8.4 billion.

Now, regular readers know that I’m not one to chase a rally — I mean, I just told you that in the last section! But AMD has amazing potential. Use your own judgment, do your due diligence and find a price point that works for you. You won’t regret it.

Finally, investors in Great Stuff Picks sit on a gain of more than 160% with AMD right now! Congratulations!

You see, this is why you need to read Great Stuff every day. You never know what opportunity (or really bad pun) you’ll miss.

For now, Great Stuff recommends that you continue to hold AMD.

With next-generation game consoles releasing this holiday season, and AMD’s Epyc server chips gobbling up market share in the same data center space that Intel’s eyeing down. There are more gains to be had here. 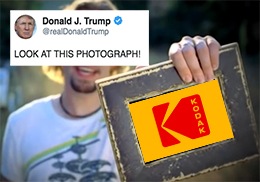 Look at this photograph, every time I do it makes me laugh. Remember when Kodak was red? And what the hell has gone to investors’ heads?

Why? Why did you tease me with Def Leppard and then give me Nickleback? Evil! You’re evil!

Well … I thought the stark contrast between the two would adequately convey the utter insanity of Eastman Kodak Co.’s (NYSE: KODK) 1,260% rally … just this week! Seriously. KODK closed at $2.62 on Monday. Today, it traded north of $34.

Did traders go insane? Kodak hasn’t made film in nearly a decade. It actually went bankrupt in 2012. What gives?

President Trump (Ah … say no more! That explains it.) announced on Tuesday that Kodak would produce generic drug ingredients in response to the COVID-19 pandemic.

“Kodak is proud to be a part of strengthening America’s self-sufficiency in producing the key pharmaceutical ingredients we need to keep our citizens safe,” said Kodak Executive Chairman Jim Continenza.

Let’s just hope that Kodak is as good at making drug components as it was with film before the digital revolution. If so, then there may be some substance behind the stock’s recent rally. I mean, aside from quintupling KODK’s market cap in two days, that is.

I’m tempted to recommend shorting KODK at this point — irrational exuberance and all. But rationality is a losing game in this market, and Kodak has a real chance to use this cash to return to some semblance of its former greatness.

If you’ve stuck with ‘Stuff for any length of time, you’ll know we’ve kept a close eye on Big Tech’s continued run-ins with the antitrust fun-busters. (See also: FAANG vs. the World.)

I mean, by this point, Congress should just enlist these same Big Tech CEOs as counsels to help the less-tech-inclined regulators cover the antitrust beat — who else knows the ins and outs of building monopolies than Bezos and the boys?

You know … it’s that whole “make an insider trader help the SEC clean up insider trading” Joseph Kennedy method. That has clearly worked out well … right?

Anyway, in our Poll of the Week, we’re bringing it back around to Big Tech (and its CEOs) — or, as The New York Times elegantly describes them: “the captains of the New Gilded Age.”

That’s right … it’s time to pin the tail on the monopoly!

We’ve got all the best in Big Tech in the game, who will it be?

Click on the poll icon below and let us know: Which of the companies pleading before Congress is the real antitrust concern?

I mean, you could also write your congressman about it, but we’ll actually read your email, so…

Thanks for answering our poll! The whole team and I appreciate your response. And you bet that we love hearing from you in our inbox.

If there’s anything on your mind that we haven’t covered today, let us know! You wouldn’t believe what makes it to our inbox. From praise over the congressional Google grilling to the brimstone and hellfire I shall apparently face for watching sports … we’ve seen it all. 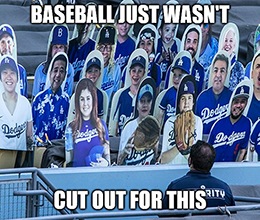 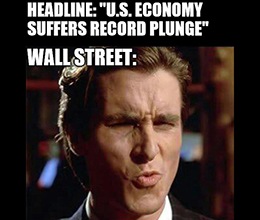