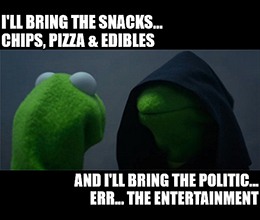 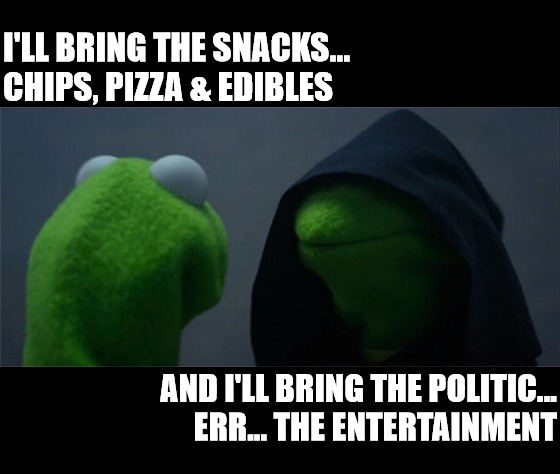 The “OMG, Why Are We Talking About Politics” Edition

Well, we made it through another week … somehow.

And somehow, we’re right back where we started.

After President Trump backed out of pandemic relief talks until after the election, those support pillars started to crumble. Of the three, only the Fed remained untouched after the President’s announcement. Government stimulus was off the table, and tech stocks tanked alongside the rest of the market.

The only thing that kept (and still keeps) the market from a full-blown plunge was the Fed’s continued reassurance and unlimited stimulus for Wall Street.

Seeing the writing on the wall, Trump reversed his stance. The President quickly stated that he was open to piecemeal relief bills, such as $25 billion for airlines or $1,200 individual checks for the rest of us. However, House Speaker Nancy Pelosi and Treasury Secretary Steven Mnuchin continued to work on a comprehensive relief bill behind the scenes.

According to the speaker’s spokesman Drew Hammill, Mnuchin “made clear” that Trump was interested in a comprehensive relief package, including jobless benefits, direct payments, airline bailouts and state and local relief.

Politics, Mr. Great Stuff? I thought you were unbiased! This is outrageous. Enough!

First, the above is fact. This happened. I’m not here to assuage your political leanings. I’m here to make sure you know what’s going on so that you can protect your investments and make money in the stock market.

Second, it doesn’t matter which side of the aisle you’re on — you need to know what’s going on in politics so you can plan accordingly. If you let your political leanings dominate your investment strategies, you’re going to have a bad time.

For instance, due to this political theater, many investors have a severe case of whiplash. The market went from steep sell-off to rally mode in less than 24 hours.

Honestly, we really should be used to this level of volatility at this point. It’s been 2020’s MO from the get-go.

Here’s the thing: I’ve preached volatility this and volatility that for what seems like the entirety of 2020. Many investors may think that this is just the function of the market as a whole.

But stocks don’t trade in a political vacuum, and the battle over the coronavirus relief bill is another cog in the vast hamster wheel of volatility we’re currently locked in.

Government stimulus or emergency relief — whatever you want to call it to make yourself feel better, it needs to happen to stabilize both Main Street and Wall Street.

Sure, we have the Fed’s support. But the Fed can only do so much. We have growth stock gains and tech stock prowess.

Tech has been insulated from the worst of the COVID-19 fallout. Heck, many of the biggest tech stocks even benefitted from it. But those gains will only hold up for so long as the U.S. economic recovery stumbles.

This battle over relief will continue to rage on, given how stubborn both sides have been throughout negotiations. If you aren’t prepared for more volatility in this battle, you’re asking for trouble.

Now, Great Stuff advocated for the safe haven approach for most of the year. Holding gold, Treasurys, currency funds and well-run blue-chip stocks is still the most secure way to stay sane in these volatile times.

However, keep some cash set aside for opportunities that arise. And I can think of few places better to take advantage of this volatility than by trusting in Banyan Hill’s own rocket scientist, Michael Carr.

Here with Mike Carr, you’ll feel safest of all. You can lock all your doors, it’s the only way to trade volatility. In One Trade, Mike recommends the same trade on the same ticker symbol every week. 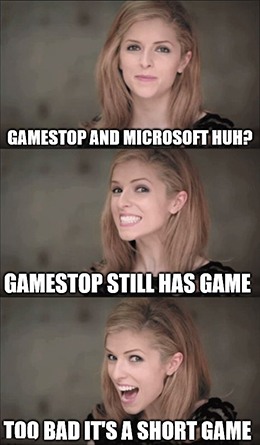 GameStop shares have been on a tear ever since entrepreneur and Chewy Founder Ryan Cohen acquired a 10% stake in the company. Cohen reportedly wants to turn GameStop into a serious online retail competitor. I’ll believe that when I see it.

But yesterday’s ridiculous rally was on a whole other scale. GME soared on news of an agreement with Microsoft Corp. (Nasdaq: MSFT) to standardize GameStop cloud-based enterprise software. Essentially, GameStop will now run on Microsoft, complete with Dynamics 365, Microsoft Teams and cute little Surface tablets for GameStop employees.

We’ve seen this before. Microsoft Stores didn’t work out all that well. But that didn’t stop GME investors from pushing the shares skyward.

The key part of the deal that seemed to excite GME investors most is that GameStop will “benefit from the customer acquisition and lifetime revenue value of each gamer brought into the Xbox ecosystem.”

While terms weren’t announced, Microsoft and GameStop imply that the latter will gain some additional financial value from selling Xbox All Access and Xbox Game Pass Ultimate subscriptions.

If true, this would be a nice steady income stream for GameStop. But I hardly think it’s worth a 40% premium in GME shares. Most likely, GME’s rally was driven by a short squeeze — when bettors against a stock buy back in to cover their short shares.

Shortsqueeze.com reports that 136% of GME’s float was sold short as of two weeks ago. That’s an insane amount of short interest, and it’d readily explain why the shares exploded on such benign news. 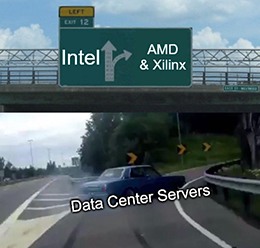 The Wall Street Journal dropped a bombshell on the semiconductor industry last night. AMD is reportedly in advanced talks to buy Xilinx Inc. (Nasdaq: XLNX) for more than $30 billion.

Buying Xilinx would not only give AMD even more competitive prowess in the data center market, it would also throw in the telecom, mobile and defense markets — for which Xilinx is a major supplier.

Naturally, XLNX was up big on the news, gaining nearly 11% on the day. AMD, meanwhile, dipped nearly 4% as investors weighed the immediate cost of the deal. But this short-sighted dip is an opportunity for any of you looking for another chance to snap up AMD.

Great Stuff Picks readers sit on a gain of more than 186% on AMD since we recommended the shares back in June 2019. I still rate the stock a buy. While your returns won’t be as good as long-term Great Stuff readers, you won’t be sorry for buying this dip. 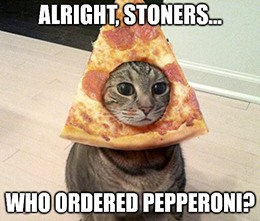 Another pandemic quarter falls in the game of Domino’s Pizza Inc. (NYSE: DPZ) — aka the déjà vu diva of earnings reports. Much like Domino’s pizza itself, it may not always be the best of the best, but you know what you’re getting.

First, it’s a sad week in the earnings confessional when this is one of the only reports worth looking out for.

Second, Domino’s actually did a bang-up job this quarter with most of the locked-down nation playing the “screw it, we’ll order in” dinner game, even if costs suffered to keep employees and customers safe.

You win some, you lose some … much like Domino’s extra garlic dips that no one ever. Freaking. Remembers!

DPZ had its usual after-earnings food coma, slouching almost 9% since the report came out yesterday — even with a fresh shot of analyst adrenaline from a 12% price target raise at Wedbush. 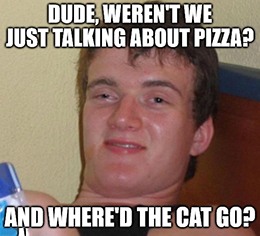 But for the rest of you interested in the pot sector’s big names — the Auroras, Canopys and Tilrays still remaining through the sector’s haze — you’d have noticed a lil extra green in your portfolio this week.

After the vice presidential debate (Oh boy, here he goes again politickin’ me off!), just about every pot stock under the sun rallied. All it took — seriously, this is it — was Vice Presidential nominee Kamala Harris mentioning the magic “D” word.

Decriminalization! Did anything actually change in the sector? Absolutely not; it’s as loopy and profit-hungry as always. So what do we call this?

All hype! All hot air!

I’m as optimistic as any of you on the sector. Trust me… But we have to recognize when a rising green tide (or rumor) lifts all boats. Until we see broad-sweeping decriminalization or legalization and safer banking for cannabis companies, we’ve got nada.

Oh you know I couldn’t go another day without mentioning real estate investment trusts (REITs). And it just so happens that weed REIT Innovative Industrial Properties Inc. (NYSE: IIPR) continues its 118% climb from the March rubble.

It’s a mixed bag — some stems, some seeds and not a whole lot of news nuggets of note.

All right! Now that we have garlicky goodness and cashed-out pot stocks on the brain, why not drop us a line with your thoughts?

GreatStuffToday@BanyanHill.com is the spot, now’s the time. We’ll get the ball rolling for you:

What’s your No. 1 stock pick for the stay-at-home market? If we can’t bank on pizza and weed, what else is there?!

Have you ever invested in AMD or any other Great Stuff Picks?

Will GameStop be the next Blockbuster? 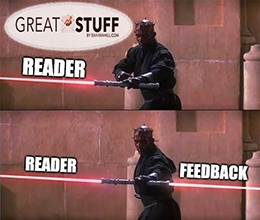 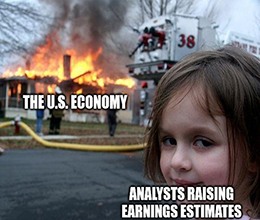