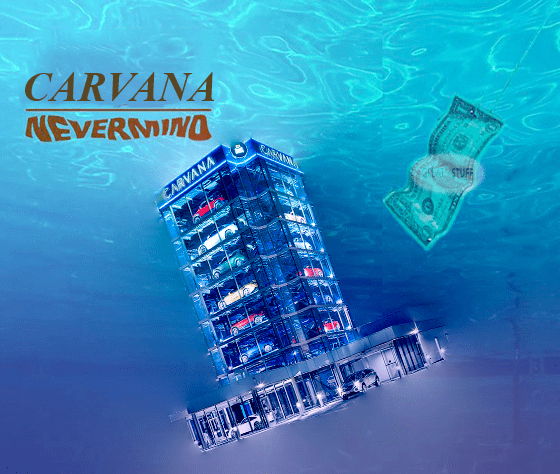 Load up on cars, bring your friends. It’s fun to lose and to pretend. Carvana’s (NYSE: CVNA) over-bored, self-assured … oh no, I know a dirty word.

How low will Carvana go? Nobody knows.

With the job cuts, it’s less dangerous. Investors are here now, entertain us!

A Monte Carlo and a Tesla. A Ford Pinto, my VW! Yeah!

Great Ones, to say that Carvana has traveled a rough road this year is an understatement. In fact, CVNA stock is down more than 80% in 2022.

The company is clearly worse at what it does best, which is supposed to be selling used cars.

Lately, however, Carvana’s cutting jobs and slashing costs. Who knew operating a gigantic used-card vending machine would be so expensive?

Hey! Those things are fun! And for this gift I feel blessed.

Yeah, but Carvana’s little group has always lost money … and always will until the end.

CVNA stockholders sincerely hope not, especially after today’s news gave them hope. You see, Carvana announced a brand-spanking-new business plan today. *Slaps the hood.* Why, this baby has all the bells and whistles of a company struggling to slash operating expenses.

It’s got sequential reductions in SG&A — which is selling, general and administrative expenses for those not hip to the lingo.

It’s got Carvana executives forgoing salaries to contribute to severance pay packages. You know, for those 2,500 employees the company just axed.

Heck, it’s even got cupholders! Somewhere…

Investors were thrilled with Carvana’s new business plan, sending the stock more than 14% higher in early trading. But, let’s be honest … when your stock is down more than 80% year to date, it doesn’t take much to get investors excited.

There’s just one hitch in Carvana’s giddyap: It is entirely possible that in the company’s race to cut administrative costs … it might’ve missed a few rather important things along the way.

For instance, Illinois just suspended Carvana’s dealer license in the state. Why? Because Carvana is reportedly improperly giving Illinois customers out-of-state temporary plates and failing to transfer titles in a timely fashion.

Seems like a problem you would naturally have after slashing 2,500 workers and making the rest of them pick up the slack … but what do I know?

Of course, Carvana doesn’t think it did anything wrong, saying that Illinois is wrong on “both the facts and the law leading to” the suspension.

“Public data indicates Carvana has dramatically fewer late title transfers than would be expected based on our sales,” says Carvana spokeswoman Kristin Thwaites.

I don’t know about you, but I read Thwaites statement as: “We sell so few cars in Illinois that it’s impossible that the situation is bad enough to suspend us.”

Apparently, it’s not just me. Investors found it hard … it’s hard to find … and CVNA pulled back sharply in late trading, barely finishing in the green for the day. Oh well, whatever, never mind…

I’m So Happy Because Today, I Found My Coins

What? You didn’t get the crypto memo? Ian King has been telling his readers about this Next Gen Coin the financial elite say could be 20X bigger than bitcoin.

That’s because, as this presentation explains, this coin has the ability to “power the rails of global finance” … a $100 trillion industry.

Thing is, 99% of Americans don’t even know this coin exists.

But that’s about to change (for you). Because I’ve got all the details on this coin … and why you should invest in it today … right here for your viewing pleasure. 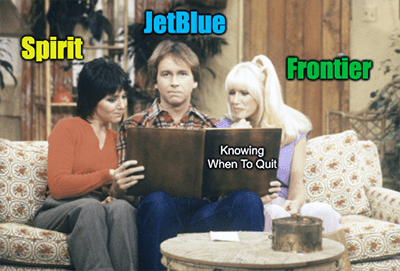 Come and knock on our door. We’ve been waiting for JetBlue (Nasdaq: JBLU)…

After getting its buyout bid for Spirit Airlines (NYSE: SAVE) rejected once, JetBlue jumped back into the auctioneer’s arena and offered Spirit $30 per share for its flyable feet.

(But rumor has it, JetBlue’s open to paying up to $33 per share for the company if this second offer still doesn’t stir Spirit’s goodwill.)

Thing is, Spirit’s already betrothed to fellow airline Frontier Group (Nasdaq: ULCC), whose merger is more likely to pass antitrust approval than one with its much larger JetBlue suitor.

This is kinda like that episode where Mr. Furley finds out that Jack is hiding something…

Dude, that was literally every episode!

Fair point. Considering both Frontier and Spirit are just trying to live their best budget-conscious lives, JetBlue’s offer looks more like a blatant slap in the face at this point than anything else.

While Spirit shareholders will still need to decide on this latest tender offer, something tells me Spirit will say “no,” even if it’s just for spite.

That’s why the world’s biggest companies are piling into AI right now. And right now, there’s a little-known stock at the center of it all.

Going: Warby Makes A Spectacle Of Itself 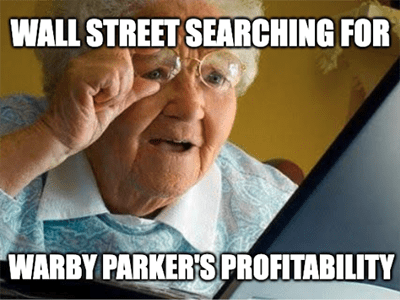 Trendy eyewear company Warby Parker (NYSE: WRBY) has wobbled precariously since IPOing last year, so it didn’t come as any huge surprise when this quarter’s earnings results didn’t live up to tepid expectations.

Fortunately, Warby’s good at reframing things — it kinda comes with the job description — and told investors that while sales slumped this quarter, in-person shopping at its brick-and-mortar locations is showing signs of life.

If you recall from issues of Great Stuff past, Warby’s brick-and-mortar business has been a monkey on the company’s back since … well, forever, really.

Since launching physical locations back in 2013, Warby’s struggled to make the in-person part of its business work — especially after gaining commercial success for its quality online shopping convenience that consumers so desperately craved.

Personally, I just don’t see physical shopping experiences becoming the boon Warby claims it can be … but hey, maybe I just need to get my glasses checked. 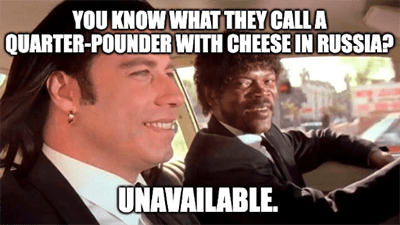 Unless you’ve been living under a rock since the start of the year — I envy you, really — you’re probably hyper aware that many big-name businesses have halted all or most of their operations in Mother Russia … for reasons.

Well, two months into pausing all of its operations in the troublesome tundra, McDonald’s (NYSE: MCD) has officially declared the country of Russia a no-fry zone.

Basically, the fast-food franchise has serious beef with Russia’s unprovoked war with Ukraine … and has decided to sell its Soviet-era eateries on the grounds of not being morally bankrupt:

Now, McDonald’s has more than 800 restaurants located throughout Russia, which previously accounted for 9% of its annual revenue … so it’s not exactly selling a small enterprise here. And the scope of this sale is likely why Wall Street’s reaction to the news was nyet particularly positive.

Still, when one iron curtain closes, another one opens … or something like that.

In other words, I highly doubt that McDonald’s will experience any abiding pain now that all of its ice cream machines are permanently broken in Russia — and I fully expect its stock to rebound rather quickly.

Monday? Oh yeah it is.

Just check out the latest slate of reports from the kind folks over at Earnings Whispers: 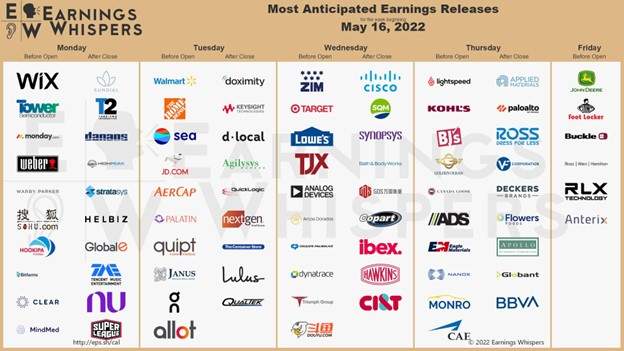 Oh no you don’t! You call this boring? Why, my tech-fiending friend, just look a lil’ deeper.

Sure, we have the usual roundup of retail names … but have you seen this market lately? Even “boring” old retail might not even be safe this earnings season. Sheesh.

We’re reading between the lines of this week’s reports for indications of consumer health. Are people biting the budget bullet and still spending out the wazoo at Target (NYSE: TGT)? Or are more consumers feeling the inflation pinch now and paring back their weekly grocery runs?

Then you have the extraneous purchases at places like Home Depot (NYSE: HD) and Lowe’s (NYSE: LOW).

We’re talking all those dreamy-eyed DIY projects y’all started during the pandemic in earnest … and gave up somewhere around the third trip back to Lowe’s.

Earnings from the DIY duo should show two things: how much the average Joe is spending on house projects, décor and whatnot … and how much of a chokehold your average contractor is in due to supply chain stressors or inflation.

You’re right — both are equally likely. And depending how budget-conscious consumers are getting, it might be time to scrounge ‘round old receipts for some Kohl’s Cash.

If you’re a budget retail investor looking at budget retail … Ross Stores (Nasdaq: ROST), Kohl’s (Nasdaq: KSS) and the TJX Companies (NYSE: TJX) are what you want to watch this week.

Which reports are you — yes, you — watching this week? And are any of you trading options around earnings? Send me your thoughts at GreatStuffToday@BanyanHill.com. 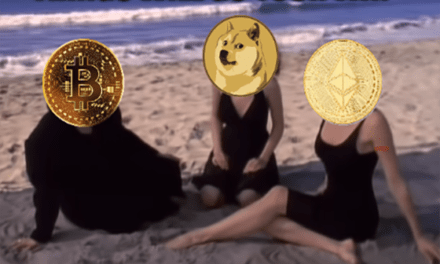 Simmer-Down Sunday: Hodl On For One More Day 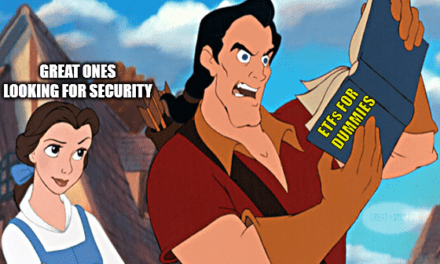