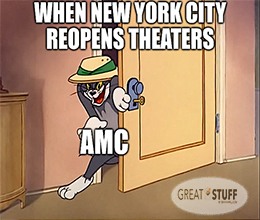 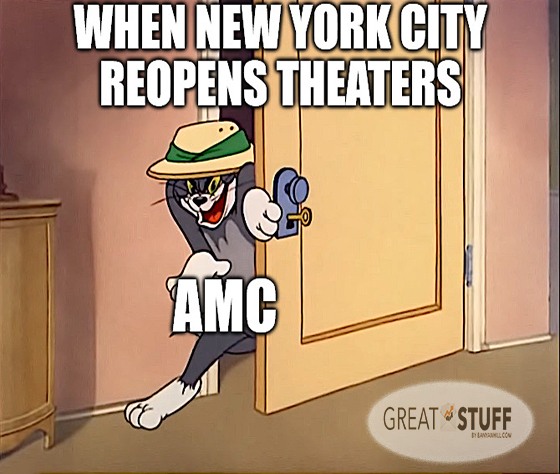 Let’s All Go to the Movies?

Whether ‘tis nobler in the mind to suffer the slings and arrows of judgmental people shaming you for going out to see the new Tom & Jerry movie, or to take masks and vaccines against a sea of infections and by opposing … end them.

To popcorn? To butter? No more! And by butter to say, we eat the entire bucket before the movie begins. Ay, there’s the rub!

Shakespeare? Really? Do you bite your thumb at me, Mr. Great Stuff?

I do bite my thumb, sir, but not at you, oh Great Ones! For I serve as good a market as you. And that market has decided that AMC Entertainment (NYSE: AMC) should rally.

Why, you ask? Pray thee, give me leave to elaborate.

New York City hath decreed that on March 5, theaters may open their doors with limited capacity. And AMC is taking advantage of this decision to open all 13 of its NYC locations.

“Gov. Cuomo’s announcement that movie theaters can reopen in New York City in the first week of March is another important step towards restoring the health of the movie theatre industry and of our company,” sayeth AMC CEO Adam Aron.

If you remember way back on January 26, I said:

The more I watch the market’s reaction to AMC’s painful throes at the hands of streaming, the more I’m convinced that AMC could win big post-pandemic … if it can avoid bankruptcy for now.

So far, that prediction is coming true. AMC has avoided bankruptcy, craftily taking advantage of the January Reddit rampage by selling 13.3 million shares and raising $304.8 million. Flush with more stability than it had months ago, AMC is now poised to actually win big post-pandemic.

The reopening of NYC theaters is the first step toward that end.

But you said that theaters are dying due to streaming. What gives?

True. Theaters won’t be quite the same in this new streaming world. Many will fall by the wayside as new releases go direct to streaming. However, places like AMC offer an experience you can’t get at home … and I’m not just talking about mortgaging your home to buy buttered popcorn.

It’s an experience that won’t die completely. I mean, seeing Star Wars in IMAX with Dolby Digital THX surround sound with a theater full of like-minded Star Wars fans just can’t be replicated at home. (And if you can replicate this at home, umm … can I come over and hang out?)

Will there be fewer theaters? Probably. But that also means that there will be less competition for AMC.

Will there be less revenue for AMC? Also probably. However, AMC is still worth more than its current deathbed valuation. The company will survive, and it will come out of the pandemic leaner and better capitalized than when it went in.

In fact, AMC may be one of the best “buy the dip” post-pandemic plays on the market. That said, this is not a formal Great Stuff Picks recommendation.

On a final note, if you are braving the pandemic to go see the Tom & Jerry movie … you deserve the lead role in Macbeth. Seriously. Just watch the old cartoons. They’re so much better — frying pans to the face and all.

Editor’s Note: Have You Seen the Ultimate Trading Strategy?

Chad Shoop shared details on his “Ultimate Trading Strategy” — a strategy that’s nearly quadrupled the returns of the market over the last four years, with the power to score record profits in just 30 to 60 days on average.

It’s all thanks to a rapid trade method Chad has spent the last four years perfecting. Top gains include 288% on Caterpillar in three months, 244% on Tesla in just five days and even a quick-fire 295% on the first half of a new trade in Teradata in only four days.

Click here: Don’t let another day go by where others are making big money in the market and you’re not! 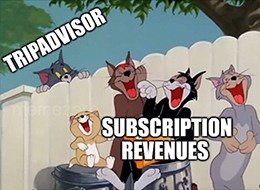 Today starts out with a lesson in market…

Timing. Yesterday, we talked up Discovery’s (Nasdaq: DISCA) decision to dine, drive-in and dive headfirst into the streaming fray. But as crowded as Discovery’s streaming market is, Tripadvisor (Nasdaq: TRIP) faces the complete opposite problem.

Tripadvisor just announced that it’s entering the subscription service shindig. (Welcome to the 2000s, by the way…)

The company has waited so long (waited so long) to take you on a trip so far from here. And for $99 a year, you’d get “access to discounts and perks from over 100,000 hotels and more than 400,000 bookable tour and attractions on Tripadvisor.”

My gut reaction was a hearty guffaw — travel subscriptions mid-pandemic? Ballsy. But the more I stewed, the more I realized that right now’s probably the perfect time to launch a service like this.

How many of you are itching to hit the road and see something other than four beige walls? Tripadvisor can ramp up its service to build on this wanderlust as travel demand increases following the pandemic. The vaccination rollout just furthers the timeline for Tripadvisor.

No one else is doing a travel subscription service like this, though the exact concept was predicted over a year ago (with TRIP even named as a trend leader). However, in a veritable sea of free alternatives, you had better get a lot of value for that $99 subscription … or Tripadvisor better hope competitors follow it into the subscription model to make the cost seem worth it.

Though, for the time being, TRIP could probably offer much better deals amid the pandemic than they would during a booming travel season, what with hoteliers and other travel companies looking to land a booking anyway, anyhow.

Home Depot’s (NYSE: HD) a dreamer, but its earnings are gold. The stock tried to run away high, but Wall Street brought it low. (Sorry, Mötley Crüe … I couldn’t resist.)

Just when earnings went right, it doesn’t mean that guidance is wrong. But Home Depot declined to provide 2021 guidance, so investors left it all alone.

Let’s leave the Crüe behind and look at the numbers. Earnings per share reached $2.65 versus the $2.60 expected. Revenue hit $32.3 billion, topping estimates for $30.61 billion.

Home Depot trounced Wall Street’s fourth-quarter targets, with earnings rising 16.2% and revenue up 25.3%. Not too shabby for a blue-chip company, huh? Same-store sales grew an impressive 24.5% — which also beat expectations, by the way.

Now, unless you’ve seen too many romantic dreams, you already know where this ends … and it’s not the silver screen. Home Depot held off on 2021 projections, calling it a long and winding road.

Specifically, the company blamed it on the pandemic, noting that “uncertainty related to the duration of the COVID-19 pandemic and its influence on the consumer” made it difficult to offer a full-year projection.

Honestly, HD investors should’ve seen this coming. The pandemic isn’t over, and there is still quite a bit of uncertainty in the air. But Home Depot is probably overly cautious, and that works out in your favor … that is if you were looking to snap up HD stock at a discount.

So, are you on your way home sweet home?

Hit me up and drop me a line at GreatStuffToday@BanyanHill.com. 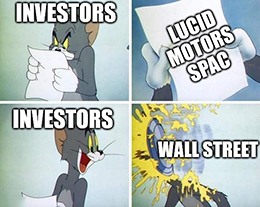 It’s days like today that I have hope that valuation will someday return to Wall Street. SPAC Churchill Capital IV (NYSE: CCIV) plunged more than 32% today.

The driver? Electric vehicle (EV) maker Lucid Motors agreed to merge with Churchill and go public. Now, we’ve seen SPACs soar to ridiculous heights this year and last, but this is the first SPAC to take a nosedive. And the problem lies with valuation.

The merger values Lucid at $12 billion, based on the incoming cash from Churchill as part of the deal. However, CCIV’s stock price on Monday put that valuation at about $92 billion. Such a valuation would put Lucid as the fifth most valuable carmaker by market capitalization.

That’s no bueno, and investors realize it. Wall Street doesn’t mind bidding SPACs into insane valuations, but it apparently has an issue with buying severely overvalued stocks. That’s not to say that expectations aren’t high for Lucid; the company projects $14 billion in sales for 2025 and $23 billion for 2026.

Given today’s plunge, it appears that Wall Street is comfortable with double Lucid’s SPAC valuation but not quadruple.

For those eyeing a Lucid investment, the company is targeting the high-end EV market — essentially Model S buyers. Whether this Telsa-like approach to EVs will work a second time around remains to be seen. But the EV market should be big enough to accommodate Lucid as well, if it can execute and deliver on production.

Still … your mileage and valuation may vary.

A crypto Quote of the Week from Elon Musk? What are the chances?

More likely than not, these days…

Quiet, you. Turns out, the Musk man’s break from Twitter lasted as long as my break from ranting about PlayStation shortages. That’s to say … not long at all. So, where’d this come from anyway?

An email saying you have gold is not the same as having gold. You might as well have crypto. Money is just data that allows us to avoid the inconvenience of barter.

Sounds like what Great Stuff has reminded everyone about for a month or so now:

If you are still hung up on the fact that you can’t hold a bitcoin in your hand … how much of your cash do you actually touch these days?

Longtime Great Ones also know what happens when Mr. Musk tempts Mr. Market’s fate with high-price Tweet trolling. If the whole thing sounds a bit familiar, it should: This same sell-off happened back on May 1 last year. 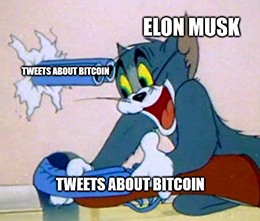 All Elon had to post was: “Tesla stock price is too high imo,” and Bob’s your uncle. Daddy Musk giveth, and Daddy Musk taketh away … even from himself. It’s no surprise that both Bitcoin (BTC) and Ethereum (ETH) have continued to pull back since Saturday’s Tweet.

Coincidence? Not really — both cryptos have rallied significantly, and profit-taking is naturally overdue. But Elon’s social media influence is nothing to scoff at, and more than a few traders have taken his tweets as essentially a leading indicator.

I want to know what you think, though. Should Elon have kept his Twitter trap shut? Have you bought (or sold) any bitcoin lately?

If not, and you’re looking for more information on how to get started, my colleague Ian “The Crypto” King can help. Click here to find out how!

Let me know your thoughts at GreatStuffToday@BanyanHill.com. Reach out anytime with your thoughts, trades, memes, rants, raves and everything in between! 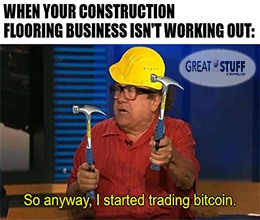 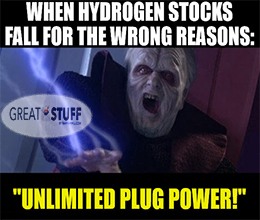