Warren Buffett Is Wrong on Apple

Warren Buffett is wrong on Apple. That’s what I believe, and I’m going to show you exactly why.

You see, I’ve spent thousands of hours reading about, analyzing, researching and verifying innovation-based companies — companies like Apple, Netflix and Google. I was an investor in Google at its IPO, or initial public offering, and I invested in Netflix when most people dismissed it as a joke.

And from looking at what is going on at Apple right now, there’s simply no question at all in my mind as to what you should do with its stock.

Watch Out, Newton: Apple Is Falling

I believe Apple stock should be sold, and here’s why.

Apple has fallen behind on the very thing that people want from it — innovation.

And none of this is a surprise to me because Apple is now missing the magic ingredients that make innovation-based companies great investments: imagination to create incredible products, and calculated risk-taking that makes them create products that people stand in line for days to get.

Since CEO Steve Jobs died in 2011, Apple’s biggest innovations are the Apple Watch and churning out phones in bigger sizes and colors. Neither breaks new ground like the iPod, iPhone or iPad did when they were introduced. The best evidence for this is the pure lack of excitement from Apple’s customers.

Apple now focuses on small adjustments and improvements to its products, often after its competitors have introduced them. Some of these changes have infuriated some of its most dedicated users, because you now have to buy expensive adapters and accessories to actually use the new features. And there’s zero excitement for most of this.

The bottom line is, Apple has simply failed at the thing that Jobs did so successfully during his tenure: introducing a series of groundbreaking, imaginative products one after the other — the iMac, iPod, iPhone and iPad. These products were risky bets, and they’re what made Apple a stock market superstar. Obviously, if these products had failed to sell, it would have crashed Apple’s stock.

Here’s my point: The very thing that made Apple successful is anathema to investors like Warren Buffett — massive bets the company wagers that are incredibly risky. Instead, now Apple goes for safe, secure options such as increasing sizes and colors, and diversification strategies like getting people to pay for second-tier services such as Apple Music and iCloud.

These things are safe and comfortable, but they simply can’t and won’t make people desire Apple’s products like they did when the company was pursuing innovation. They do, however, attract investors like Buffett who want to avoid risks and get safe returns.

I believe this is why Apple’s sales experienced their first annual decline in 15 years in 2016. That’s based on Apple’s financial year, which ended in September 2016. 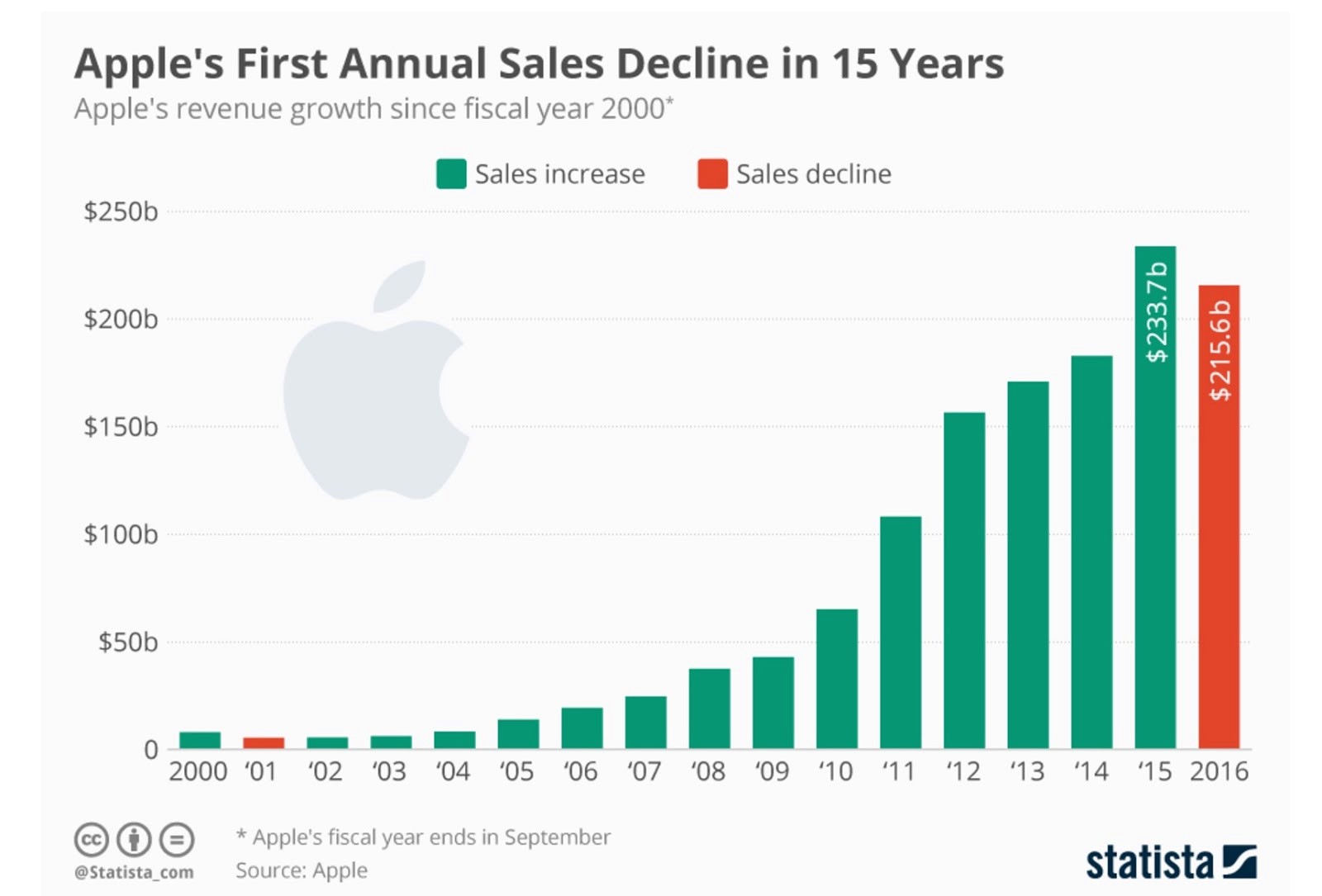 And even though Apple reported rising sales for the first quarter of 2017, that turned out to be a one-time thing, especially for Apple’s most important product, the iPhone, where sales slowed down in the second quarter.

I believe that Apple is no longer a growth company because it’s gone safe in the thing that really matters — innovation. Instead, it’s now a company that pursues corporate goals like profitability. It looks to entice safety-oriented investors like Buffett through dividends and stock buybacks.

Now, Apple’s stock may continue to keep rising even though its business is in decline. That’s easy when you have Buffett bidding the stock higher with $1 billion in stock purchases every few months in combination with Apple buying back $34 billion of its stock in the last 12 months.

However, my experience with innovation companies is that imagination to create incredible products and calculated risk-taking are what drive growth. Right now, both of those things are in short supply at Apple. And until that changes, Apple is going to be a stock that is driven by dividends, buybacks and people like Buffett bidding it higher … instead of real growth driven by incredible, exciting products that people love.

Investing in the Energy of Today and Tomorrow