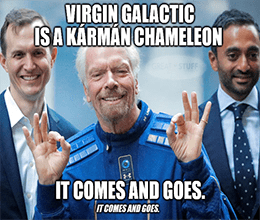 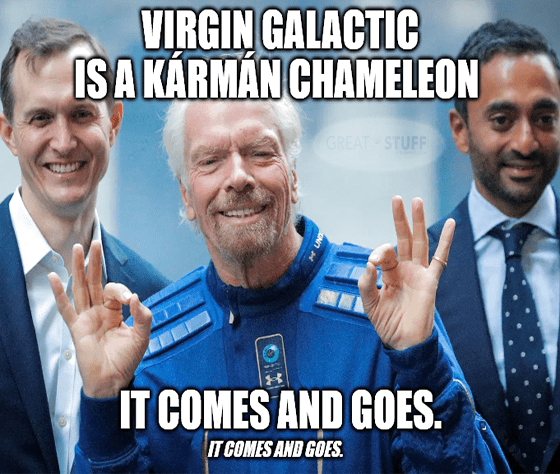 This weekend, the almost, but not quite, entirely unlike space company completed its first “spaceflight” in more than two years. Investors went gaga over the event, sending SPCE up more than 20% on the open this morning.

Honestly, there’s reason to be excited. The successful “spaceflight” means that Virgin’s Unity rocket is viable, scrubbing reports of unreliability after prior flights were canceled.

Unity is designed to carry up to six passengers and two pilots. As of right now, Virgin Galactic says that it has roughly 600 reservations for future flights, with tickets selling for between $200,000 and $250,000.

Before you get too excited, it’s important to remember that that money is already accounted for in SPCE’s stock price.

What hasn’t been accounted for are payments received for NASA-funded research payloads. This weekend’s flight carried three such payloads, which generated revenue for Virgin Galactic.

The company says that revenue will be reflected in its second-quarter financial report.

Virgin now has just three “spaceflights” left to finish the development of Unity and its SpaceShipTwo rocket system.

One of those “spaceflights” will include passengers to test out Unity’s cabin, while the third will carry none other than Sir Richard Branson himself.

OK, I get it. But why do you keep putting spaceflights in quotes, Mr. Great Stuff?

I’m glad you asked, Great Ones! There are, in fact, two different definitions for “space,” believe it or not.

The first defines “space” as reaching an altitude of 100 kilometers (62 miles, or 330,000 feet) above sea level. This is called the Kármán line, named after engineer and physicist Theodore von Kármán.

At this altitude, you are completely free of Earth’s atmosphere. This means that your spacecraft is entirely supporting itself and receiving no lift from the Earth’s atmosphere — i.e., there’s not enough air up there to fly a plane, so you need a rocket.

The second definition puts “space” at 50 miles above sea level. This is the definition NASA and the U.S. Air Force use. Because why? Well … because they are the Air Force and NASA, that’s because why.

Virgin’s Unity hit an altitude of 80 kilometers above sea level this weekend, officially dubbing the pilots as astronauts by U.S. standards. But, by international standards, Unity remains to this day a Kármán, Kármán, Kármán chameleon. (Come on … you know I had to do it.)

Personally, I’m still unsure about Virgin Galactic’s future. Sure, the company is going to rake in millionaires lining up to fly to space. But for the company to be a true commercial success, it eventually has to find a way to offer much more affordable flights. And … it will need more spaceships. A lot more.

Virgin already has plans to build five Unity spacecraft once testing is over. With that in mind, let’s do a little math.

Aww … I was told there would be no math!

Virgin has 600 reservations already lined up. Assuming the company builds all five spacecraft and launches all five once per month (to allow for maintenance and timing), it will take 10 years for current paid wannabe astronauts to finally get to space. And remember … those are already paid for.

My question is this: Where’s the revenue going to come from?

Until I can see a profitable path forward, I’m avoiding Virgin Galactic.

Elon Musk calls it “amazing…” A former Apple CEO says: “[It will] have a far bigger impact on humanity than the Internet.” While a Harvard Ph.D. says it could “[surpass] the space, atomic, and electronic revolutions in its significance.”

It’s a technology my colleague Adam O’dell calls “Imperium.” And it’s about to spark the biggest investment mega trend in history … with one small Silicon Valley company at the center of it all.

The Good: Above & Beyond 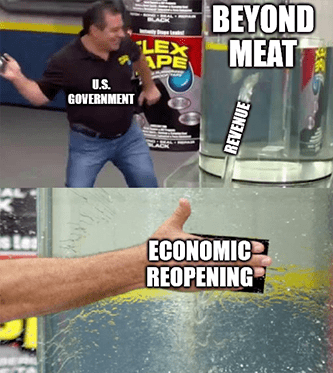 After it was beaten and battered by the pandemic, Beyond Meat (Nasdaq: BYND) is back … baby!

Or at least that’s what Bernstein Analyst Alexia Howard told subscribers in a recent research note. Howard — who is neither a bear nor a duck, as far as I know — lifted her price target to $130 and double upgraded BYND to outperform.

According to Howard, Beyond’s sales will rebound “significantly” as the pandemic winds down due to its partnership deals with McDonald’s, Yum Brands and PepsiCo.

As such, Howard is calling Beyond a “buy-the-dip” play for the U.S. reopening.

Despite my preference for Impossible Foods’ meatless burger — it doesn’t smell like cat food, which is a major plus in my book — I have to agree with Howard on this one. The main reason BYND fell throughout the pandemic was the loss of food-service sales.

It stands to reason then that the biggest driver for a comeback in BYND would be a grand reopening of the U.S. economy and a resurgence in eating out.

Personally, however, I would wait for BYND to reclaim support at $125 before buying back in. This area provided key support throughout the pandemic and could limit BYND’s upside over the short term. 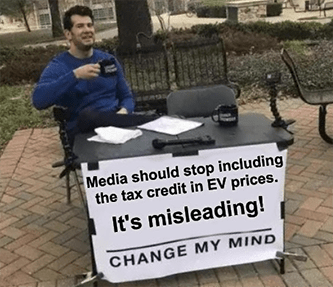 Remember all those times we talked about how the real Tesla-killer might be good ol’ Ford (NYSE: F)? Yeah … it’s still gonna be Ford.

I’m as far from a contractor as you can imagine (despite what my landlord seems to believe), and even I geeked out about the new F-150 Lightning.

You can hook up tools and chargers and whatnot back in the bed, storage space under the hood like it’s an old old-school VW Beetle, and it doesn’t look like the Warthog from Halo? I’m in.

But … here’s where Ford again butts against the revolving door of investors’ expectations.

Back in March, we mentioned that Ford’s Mustang Mach-E — a crossover by any other name — was responsible for Tesla’s electric vehicle market share slipping 12% year over year. And once the F-150 Lightning starts rolling out to customers, I expect Tesla’s share to drop even further — just not as much as Wall Street might expect.

Investors desperately want the Lightning to be the Tesla Cybertruck killer, which is nice … except for the fact that it’s specifically for commercial users and fleet operators. Ford isn’t targeting the same audience as Tesla … like, at all.

Even CEO Farley said as much, noting the F-150 is “totally plugged into always-on services that can help business productivity.”

Oh, and we should probably talk about this “$39,974” price tag that’s also being thrown around. Pure unadulterated marketing BS, that is. While it’s still testing the limits of the average consumer’s car budget, you only get that low-low price with a roughly $7,500 tax credit. Meaning … this car starts at about $47,500.

In other words, if you only owe $1,000 in taxes, you only get a $1,000 credit for the truck. The rest is gone. If you don’t owe any taxes, you get no credit. Nada. Zip. Technically, this should be a majority of tax filers (keyword: should).

Don’t expect this truck to come in under $40,000 for most people. And that’s not even for the extended-range model, which ups your range from 230 to 300 miles for another few G’s. C’mon, Ford — stop pricing in the tax credit! It’s super deceptive at best. Bad Ford.

Anyway, even the Lightning’s striking hype couldn’t resuscitate F shares after they reached resistance around $13.40, and the stock sank 2% by the end of the day.

The Ugly: T-Totaled Time Out 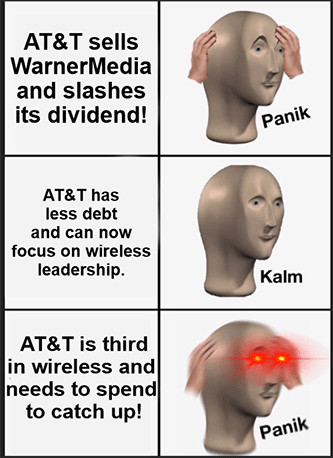 It’s Monday, so that must mean it’s time for your AT&T (NYSE: T) news break. Last week, we highlighted AT&T’s spinoff of its WarnerMedia unit to Discovery (Nasdaq: DISCA) for $43 billion … less than half what AT&T originally paid.

This weekend, Barron’s said that it is now time to buy T stock … and I’m left wondering: Why?

Here’s a distilled version of Barron’s reasoning: AT&T slashed its dividend in half and sold WarnerMedia to pay massive debts. The company will now solely focus on reclaiming dominance in the wireless market. This is good for AT&T.

OK. I agree with this logic if you’re Jonesing to own AT&T stock. Given that AT&T had one of the best libraries of streamable content on the market and couldn’t find a way to profit from it … selling WarnerMedia was the right move — for both AT&T and HBO Max customers.

However, as Barron’s notes, slashing the dividend likely forced many investors to reconsider their investment. That sweet, sweet 7% dividend yield is now gone, meaning retirees and anyone else invested solely for the dividend are out the door.

What this means is that the only investors left are those who believe AT&T can once again be competitive in the wireless market. It’s been a long time since AT&T took wireless seriously, and both Verizon and T-Mobile have surpassed the company.

The problem here is that AT&T isn’t out of the massive debt forest just yet. Furthermore, it needs to spend to catch up to Verizon and T-Mobile. So, while Barron’s and Wall Street analysts extol the virtues of a slimmed-down AT&T while downplaying the dividend cut, the company still has a long way to go to repair its self-inflicted pain.

So, how about that lumber shortage, huh? I thought this stuff grew on trees.

Soaring costs and added expenses keep coming out of the woodwork now for most homebuilders. Check it out: 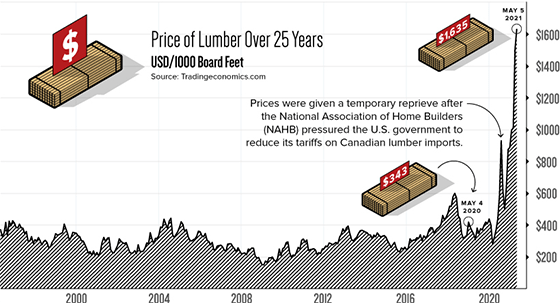 Wow, yup, that’s some expensive lumber — and I bet you probably couldn’t even trade sheep or grain for it. I wonder what else is going on…

Do Not Go Gentle Into That Great Night

All right, Great Ones, that’s enough ranting from me for one Monday — I want to hear what trouble y’all got up to this weekend.

Got any trades in your sights? Any soapbox diatribes on your mind? 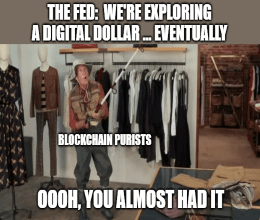 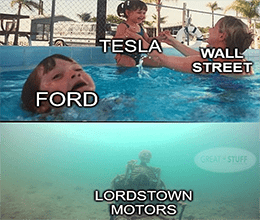