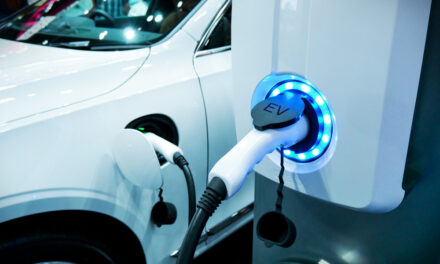 Some called us crazy when we said back in January that Tesla Inc.’s (Nasdaq: TSLA) stock would hit $1,000 this year.

But demand is hotter now than ever before.

And that’s just the beginning, as the EV boom remakes the American car industry and shapes America 2.0.

This week Amber Lancaster, Ian Dyer and I update you on our earlier stock price prediction for Tesla to eventually become a $4,000 stock.

Plus, what to expect for Tesla’s earnings announcement this week and the incredible innovations coming to the market in EVs now. (Hint: new stock picks coming soon!)

Check out today’s Market Talk for our Tesla update and how you can capitalize on the EV revolution:

As seen in this Bloomberg earnings calendar, as many of you know, Tesla reports its second quarter. 2020 earnings on Wednesday July 22, after the markets close. This earnings release has significance because if Tesla reports a Q2 net income that’s positive, the company will officially be eligible to be added to the S&P 500 Index.

To even be considered as a potential member of the S&P 500, a company must meet five major criteria: 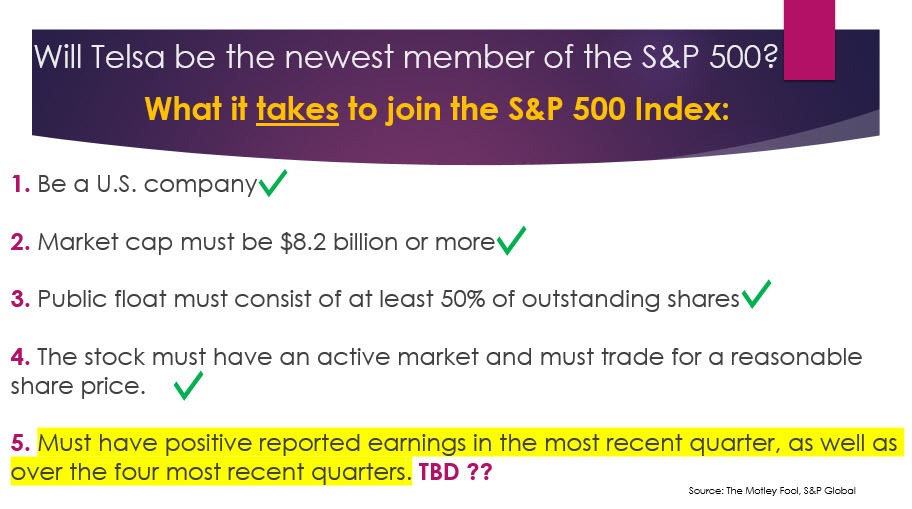 A white paper, by the National Bureau of Economic Research, has found a correlation between stock performance & inclusion in a major index – meaning an outperformance is possible, but in this case, the potential stock increase is likely already priced into the shares. But what’s most notable is that right now share short interest, the number of traders betting against Tesla, is a record $20.9B. This means if the company has a Q2 profit, its share price could soar! 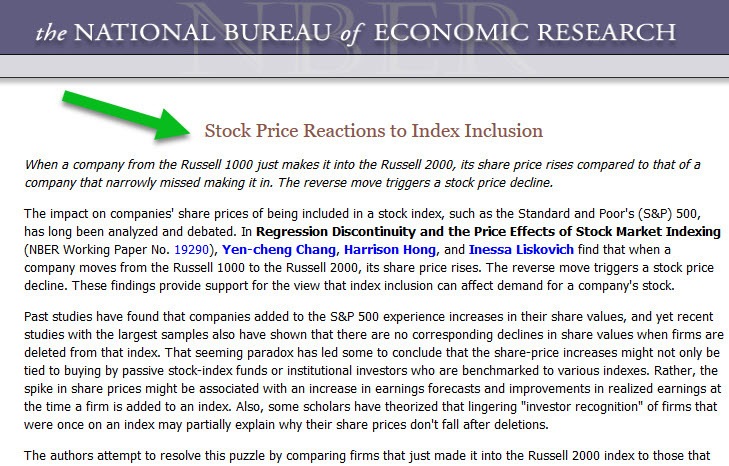 As this Bloomberg earnings calendar also shows, as noted by the two purple arrows. Tesla’s EPS (earnings per share) estimate is forecast to be a loss of 21.9 cents with a Q2 sales estimates of $5.086 billion.

This next Bloomberg earnings estimate surprise table shows, Tesla surprises on earnings an average of 1.34%. The average absolute share price change 1 month after reporting earnings is 13.38% and out of the last nine quarters, Tesla beat earnings five times. This tells me that Tesla beating earnings for the second quarter & reporting a Q2 profit based on past surprises is up for grabs on a historical standpoint. About a 50/50 chance.  But you know we are long-standing Tesla bulls here at Bold Profits who believe in its product line and know it will have a major impact on the future of technology from EVs to batteries to solar. 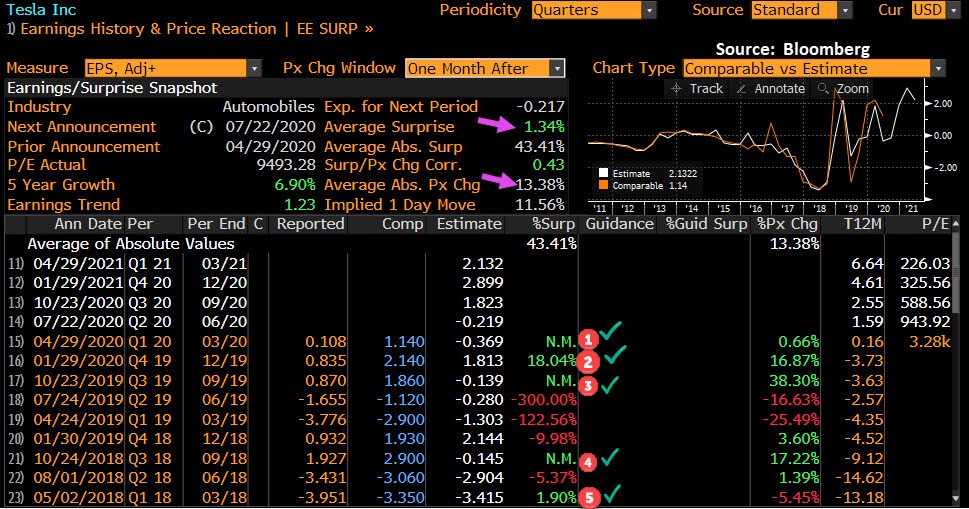 For a hint as to how it may report, look no further than its second quarter car deliveries. As seen in my tweet on July 2, Tesla’s Q2 deliveries crushed estimates. Total delivers came in at 90,650 versus estimates of 83,071.  Tesla’s stock price traded higher on this news. 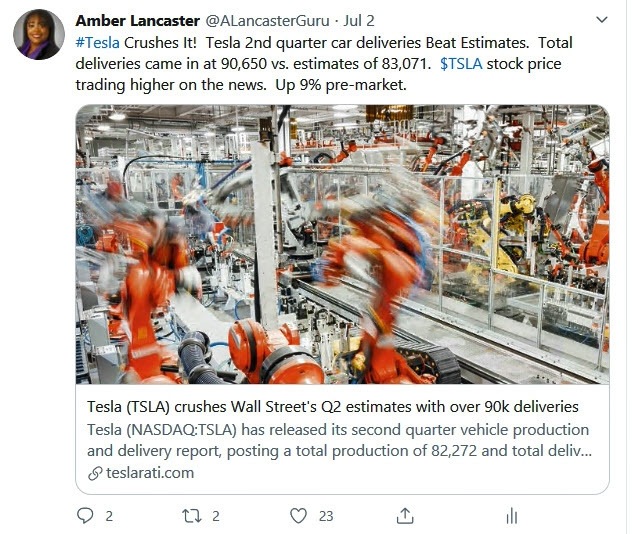 But no matter what happens, know that we’re in Tesla for the long haul. One to three years minimum.

In our latest internal investment call this past Thursday, Paul’s EV market take as revealed. Here are his Tesla & EV market golden nuggets. First, he asked, “Why are people bidding up EV stocks?” Here’s his take:

“In my judgment what’s gone on, is it is true that the cost of batteries is in steep decline. It is also true that people have seen for the first time Nikola, [an alternative EV design] company — truthfully … I only vaguely heard of … going into production in the next two years.

“In other words, [Nikola] is saying they are going to do what Tesla has been doing. It’s the equivalent of a hydrogen gigafactory. The market pays attention to that.

One of the most difficult things for a company is to scale commercially.”

“It’s fine to run a nice experiment where you say hydrogen does this, that or the other. To say you are going to put $2 billion in and put a plant up and produce, well the market is interested in that.

You are putting real capital at risk and about to go and produce at scale. I believe this is one reason why its lit a fire under the hydrogen stocks.”

“Then there’s the other aspect of the fact that Tesla’s stock has been bid up significantly.

It’s some combination of the fact that Tesla is very unique in the sense that you have never seen a large-cap company that has such a large short position.”

“So into anything that is positive, there has been an extreme moment of demand and supply out there. In other words, the shorts are pressed to pay a very high price to cover.

Once that buying pressure is in, the stock tracks back in. Then there’s the issue of being added to the S&P 500.”

“Then there’s this slightly anecdotal issue which is that it does seem like the amount of demand for EVs that’s largely anecdotal data put out by questionnaires.

I have seen a number of papers suggest that people want to buy EVs. The rate of growth for EVs, people are estimating, is about to see a huge ramp up.”

“People are starting to price that into Tesla. Then there’s a natural effect from two perspectives that matter.

One is from the stock market perspective which is that people are looking for other EV bets are pure demand for their stocks.”

“Then there’s the equally associate thing that in the commercial market for cars, people say if that demand trend is right and these questionnaires and anecdotal points suggesting more people as they come in the market to buy cars are going to want electric vehicles, what will they buy?”

“Many people cannot afford a Tesla because the upfront cost is too high.    What else is out there? The truth is, not much.

That will drive speculation. Investment bankers say if you, as an EV startup company, want to scale up this is your moment to go raise capital from the stock market. People are now willing to discount Tesla sales.”

“Before it might be three years out, now it’s five years out or maybe even seven years out. That will drive investment demand for various EV stocks with the idea that it’s also going to drive huge demand for EVs.

For sure the market is suggesting there is going to be significantly more demand for EVs in the next three years than what is currently estimated in forecasts from analysts.”

“The revenue numbers from Tesla three years from now will be significantly higher than what is currently estimated by a factor of maybe even 50%, 70% or 100%.   That’s what the market is saying.”

And to support Paul’s assessment that the sheer commercial demand from people wanting to buy EVs is about to see huge ramp up, check out the results of my Twitter Poll taken this this past weekend, where I asked: Will your next car be an electric vehicle? 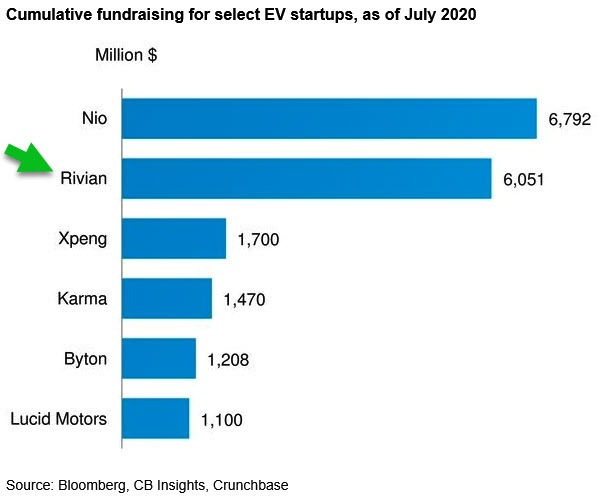 As this bar chart shows, the Electric Vehicle startup Boom is here also supporting Paul’s argument that soon there will be other EV bets.

Just take Rivian, a U.S. EV startup as an example. Per Bloomberg, “this startup raised $2.5 billion on July 10, 2020, bringing its total fundraising to over $6 billion.” Rivian, one of the best funded EV startups in the business has an order from Amazon to make 100 thousand EV delivery vans. This shows big money investments from venture capitalist and private investors are betting all-in on EVs future. 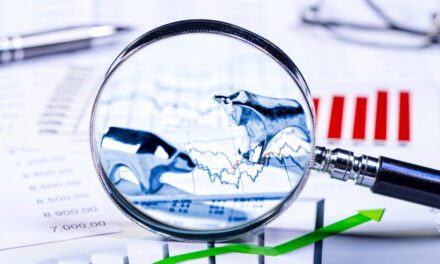 3 ETFs for the Next Big Earnings Surprise 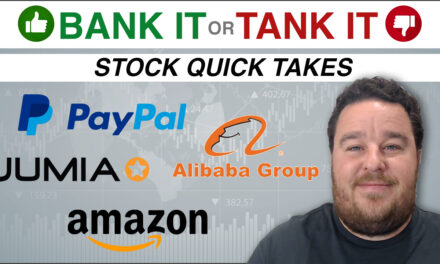 What Are the Stock Market Winners and Losers in the Pandemic?