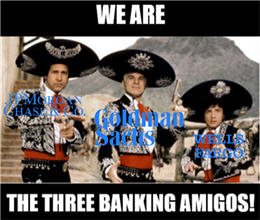 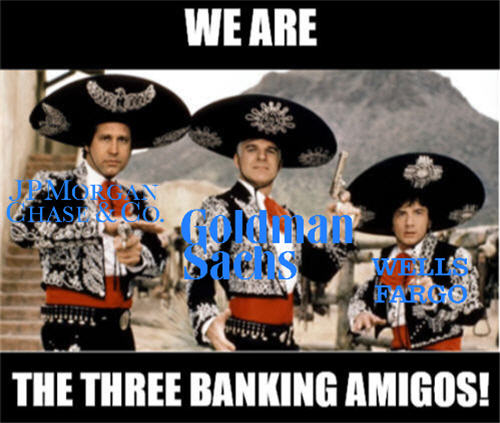 In a way, all of us have an El Guapo to face. For some, options trading might be their El Guapo.

For us as investors, our El Guapo is a big, dangerous earnings season filled with volatility and the threat of an earnings recession.

But the three amigos of banking have shown us that not all earnings reports will be bad this season.

All three banks beat earnings expectations, driven by gains in retail banking, credit cards and auto loans. And all three of their stocks are rallying this morning. OK, maybe not Wells Fargo. (You just knew the company would be Ned Nederlander, aka Martin Short).

Goldman Sachs is, of course, leading the way on Wall Street. GS stock is up just shy of 2%, with investors gobbling down the company’s dividend boost to $1.25 per share from $0.85. What’s not to like about a 47% hike?

Banking stocks have their own El Guapo to face later this month. His name is Jerome Powell, and he’s the chairman of the Federal Reserve. Powell is expected to cut interest rates at the July meeting, with an 83% chance of a 25-point cut and at 16% chance of a 50-point cut.

Why is this bad for banks? Because lower interest rates mean less money from lending.

Those gains Wells Fargo saw from auto and credit card loans? Yeah, those are under real pressure from a Fed rate cut. It’s why, despite beating earnings expectations, WFC stock is down nearly 2% today.

The point is, investors in WFC, GS and JPM might want to enjoy what little gains they’re getting today. It may be a while before they can rejoice again.

The Good: Truckin’, Got My Chips Cashed In 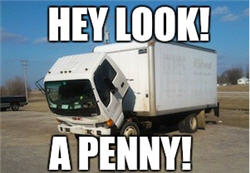 Up more than 7% today, JBHT is running on reds, vitamin C and earnings — which came in $0.04 better than expectations. Revenue was also up 5.7% to $2.26 billion, matching expectations.

That said, intermodal revenue was a concern for some investors. Intermodal is when you shift from trucks to trains or vice versa.

J.B. Hunt citied a “softer freight market” for the 1% decline in intermodal revenue. All a friend can say is: “Ain’t it a shame?”

Still, transports have remained strong this year, and J.B. Hunt will keep truckin’ on.

The Bad: Avoid the Noid 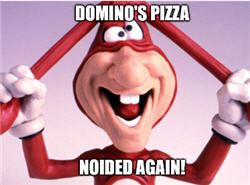 I like Domino’s Pizza Inc. (NYSE: DPZ) … well, their pizza, anyway. The stock has been an interesting ride.

Today, shares are down more than 6% as earnings failed to avoid the noid. Same-store sales showed the slowest growth in three years, and both earnings and revenue missed expectations.

Admittedly, I haven’t been able to order Domino’s since I moved about three years ago … but I hardly think I ate that much pizza.

Still, it was fun to hear a Bernstein analyst talk about “better pizza competition” in a serious tone. The main concern, however, was Domino’s opening more stores to compete with delivery services such as Uber Eats and DoorDash. It’s a move the company calls “fortressing.”

If this strategy doesn’t pan out, we could see growth continue to slow for DPZ.

The Ugly: Don’t Be Evil 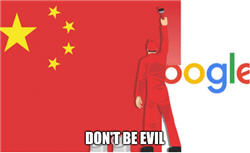 Google parent Alphabet Inc. (Nasdaq: GOOG) woke up at the center of a presidential tweet storm this morning. According to President Trump: “Billionaire tech investor Peter Thiel believes Google should be investigated for treason. He accuses Google of working with the Chinese Government.”

Trump went on to call Thiel “a great and brilliant guy who knows this subject better than anyone!” and promised to take a look.

This one is ugly because neither Thiel nor the president offered any information to back up these claims. Additionally, it should be noted that Thiel is on the board of Facebook Inc. (Nasdaq: FB), one of Google’s biggest competitors in the online advertising market.

Right now, this is all just hot air being blown around, and GOOG stock isn’t reacting. But it’s something to keep on your radar, especially with all the big-tech anti-trust winds blowing around in Washington.

Stocks climb after an earnings recession without an economic recession. That’s a simple statistic that many disregard, and why we’ll see worrisome headlines in the months ahead.

Since we’re on an “earnings recession” kick this week, it’s important to know all sides of the story.

Banyan Hill expert Chad Shoop takes an optimistic look at the situation this week in his latest article, “1 Statistic to Understand This Earnings Recession.”

(Hint: It’s where I stole this week’s quote from. Shhh … don’t tell Chad.)

Now, I know you want more of Chad’s wisdom on how to profit from earnings season, so click here now for his flagship service, Automatic Profits Alert.

So, I’ve gotten quite a bit of … interesting feedback from y’all.

You guys are weird, and I like it. I’ll be getting to some of the more interesting stuff later this week in Thursday’s Reader Feedback section. Be prepared.

There’s still time this week to get your stuff in. So, if you want to see your quote in an edition of Great Stuff, drop me a line at GreatStuffToday@banyanhill.com.