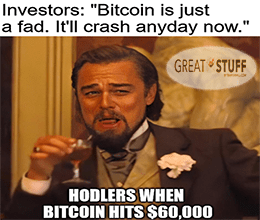 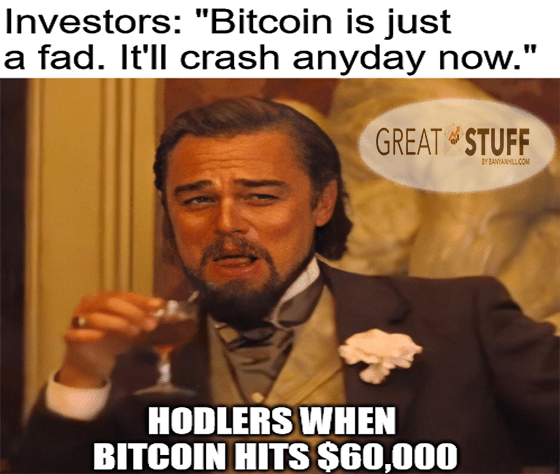 That’s what all the cool analysts are saying right now, especially after this weekend’s record-breaking rally. The world’s leading cryptocurrency topped $60,000 on Saturday, driven by a host of drivers … some new, some old.

The old hat drivers include the $1.9 trillion COVID-19 recovery package passed last week by the Biden administration, and this week’s Fed meeting on U.S. monetary policy — cause, you know, inflation. Analysts speculate that at least some of that relief money will end up going toward bitcoin investments. I call that a no-brainer, given what we’ve seen since the start of the pandemic.

But academic reasoning hasn’t been the market’s strongest suit lately … if it was, valuation might be a bigger player in the market. No, the biggest bitcoin driver, and the likely catalyst for this weekend’s trip to $60,000, is the rise of nonfungible tokens (NFTs).

Now, I could spend today’s entire issue of Great Stuff explaining NFTs … but that’s boring. Suffice it to say, nonfungible tokens are not a fungus, nor are they exactly “tokens.” So, don’t run down to your local Chuck E. Cheese to stock up … those fungus tokens aren’t worth anything.

If you want more on NFTs, click here for a more boring — but informative — explanation.

Because a piece of artwork by Mike Winkelmann, otherwise known as Beeple — yes, Beeple, sounds like “sheeple” which would explain the following — sold for a record-breaking $69.3 million. The artwork was sold as an NFT, marking the third most pricey piece of art sold by a living artist and the most expensive NFT ever sold.

And since NFTs run on the same technology as cryptocurrencies — aka, blockchain — crypto traders piled into bitcoin. Makes sense, right? Clear as mud. It’s basically the same reason all green energy stocks rally when a new green energy SPAC hits the market. They have nothing to do with each other, but speculators gonna speculate.

The ironic thing here is that this weekend’s push to $60,000 has analysts buzzing that bitcoin is going to $100,000 … and soon. In fact, check out this projection by Sergey Nazarov, co-founder of blockchain initiative Chainlink:

If you consider how many asset managers and retail investors are afraid of the existing financial system failing them, and if a small portion of them go on to place even 5% of their portfolio into Bitcoin, then $100,000 per Bitcoin is a very conservative estimate.

So, Great Ones, my question to you is why aren’t you invested in bitcoin yet?

You put it off when bitcoin was at $20,000 because the market told you it wouldn’t go any higher.

You put off investing when bitcoin hit $40,000 because, again, the talking heads said bitcoin was at its peak.

Wall Street peddled fearmongering about bans in the U.S. and China that haven’t, and likely won’t, come to pass. Meanwhile, the big banks and tech leaders like Elon Musk and Tesla snapped up bitcoin while you were scared on the sidelines.

Now bitcoin is at $60,000 … how much longer are you going to put it off? How much more opportunity will you miss out on?

The bottom line is that you need to be a part of the crypto movement now! If you want to go it alone, kudos to you. That’s a lot of homework and research, but you can do it. I believe in you.

However, I have a much easier way to get in on the bitcoin rally with expert advice. My colleague Ian “The Crypto” King can set you on the pathway to Next Wave Crypto Fortunes.

So, stop sitting on the sidelines! Click here to find out how to get started in bitcoin now! 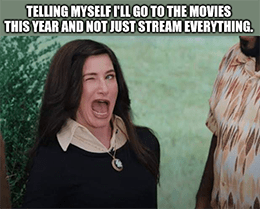 Back in 2012, Wanda bought a $2.6 billion stake in AMC — about 64% of the company’s voting power — and snapped up two board seats. In a recent filing, however, Wanda announced that it was calling it quits with AMC.

Sure, the pandemic has been bad for AMC. The company just reported a record loss of $4.6 billion in 2020. But theaters are reopening across the country, starting with two locations in the Los Angeles, California, area this week.

Hey, you’ve gotta start somewhere. And a journey of a thousand miles starts with just a couple of steps … or something like that. The point is that AMC will make it through this mess and emerge from the pandemic stronger and leaner than before. Wanda just has no vision.

With no controlling shareholder in place, now, AMC will be governed, just as most other publicly traded companies, with a wide array of shareholders.

Umm, yeah. That’s how that works. Water is also wet, and popcorn needs butter. I’m just glad Aron runs AMC better than he provides investor inspiration. My “journey of a thousand miles” isn’t looking too shabby right now, is it? 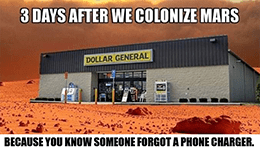 From bitcoin to dollar bills, everyone is Jonesing to get a piece of that $1.9 trillion recovery package.

This morning, Atlantic Equities upgraded Dollar General (NYSE: DG) from neutral to overweight with a price target of $243 — a 25% upside from Friday’s close.

Atlantic believes that Dollar General will benefit generously from the recovery checks, which should go without saying. Dollar General stores are everywhere these days. They’re like dandelions or something.

But while Atlantic is making noise for DG today, investors are likely more focused on Dollar General’s upcoming quarterly report slated for this Thursday morning. The consensus expects earnings of $2.72 per share on $8.3 billion in revenue, according to FactSet.

That projection falls in line with EarningsWhispers.com’s whisper number of $2.72 per share earnings.  As a bit of a contrarian, the fact that “whispered” earnings numbers are in-line with consensus estimates tells me that Wall Street may be underestimating Dollar General’s growth over the past quarter.

Backing this up is the fact that Dollar General has bested Wall Street’s estimates in each of the past four quarters. With recovery checks rolling in, I’m betting Dollar General will report a beat-and-raise quarter this week.

Right now, DG is down more than 11% since its January highs, and that leaves plenty of room to run higher. The only question for DG bulls right now is: How will the market react?

Great Ones, you all know that beat-and-raise has been all but a death knell for stocks in 2021. Will valuation win for DG this week, or will the stock sell off on the news? If it’s the latter, this could be a great DG buying opportunity. 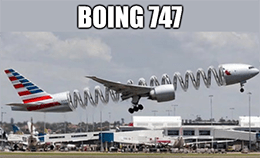 Admit it, Great Ones. Some of you laughed when I recommended buying Boeing (NYSE: BA) as a value pick back in December.  Well … who’s laughing now?

Boeing shares are up more than 23% since my recommendation, compared to a mere 5.6% gain in the S&P 500. Have there been stocks with bigger gains? Sure. But few have rallied with the same peace of mind and certainty as BA. And there is so much more upside for Boeing…

The big-ol’ jet airliner took off early this morning following a weekend report from the TSA. The intimate pat-down agency reported that it screened 1.35 million airline passengers on Friday — the highest in nearly a year. Yes, people are flying again … and that’s good news for Boeing.

What’s more, the company announced last week that its net order book was positive for the first time in more than a year. Boeing said it had 86 gross orders from 39 new requests for the 737 MAX. The MAX is back, baby! As of right now, Boeing is sitting on a backlog of 4,041 new aircraft.

And the rally is just beginning. BA is still down about 64% from its all-time high set back in March 2019.  So, while some of you are day trading cruise lines hoping for a full recovery that probably won’t come for another two or three years, Great Ones are banking gains right now on aircraft maker Boeing.

Hold on to BA stock, Great Ones … the sky is the limit.

Are you tired of hearing me pontificate on the ins and outs of the market?

Itching for a chance to open up with thoughts of your own?

Do you have burning questions or hot takes about bitcoin, inflation or portfolio allocation?

Do you have strong opinions on our usage (or nonuse) of “all y’all” or “y’all’d’ve”?

Well, all y’all can just us a line at: GreatStuffToday@BanyanHill.com. 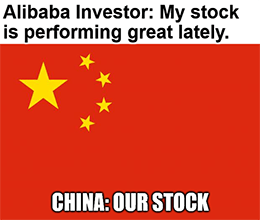 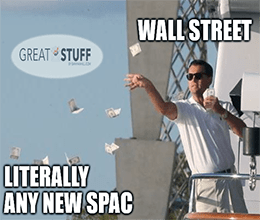