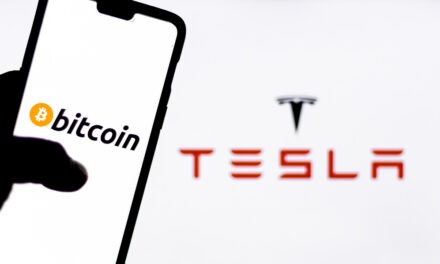 You know we love electric vehicles (EVs) and cryptos for big bold profits. And you know that stacking mega trends is the very core of America 2.0.

Well, here’s what you may not know: that’s happening today with these two superstars.

Despite any Twitter shade, there could be an interesting partnership brewing between Tesla and bitcoin.

There’s another branch of Tesla gearing up to make a huge impact on earnings — new energy.

As of May, Tesla has installed 200,000 power walls all over the world. It also launched Tesla Energy in China.

Bottom line: Tesla has amazing growth ahead! And this America 2.0 mashup could launch bitcoin to new highs.

See the full story and how you can invest in cryptos with Tesla in mind:

Welcome to Market Talk, the home of Bold Profits Strong Hands Nation! I’m Amber Lancaster. Thank you for tuning in this week.

As you can see, today Ian Dyer — Senior Investment Analyst at Bold Profits and co-editor of several trading services, including his newest service called Crypto Flash Trader — is here to talk cryptocurrencies and Tesla. Plus, I will share a couple earnings charts from Bloomberg that support our long-term bullish, optimistic, positive take on Tesla.

Hello Ian. Good to see you. Thank you for being here as always. How are you today?

Ian Dyer: Hey Amber. I’m doing well. Thanks for having me.

Amber: Of course, Let’s get started. Ian, I am so glad you are here today. I have a trio of questions for you. My first question is regarding Tesla.

The EV maker is scheduled to report their second quarter 2021 earnings on July 26 after the markets close. Per Bloomberg forecasts, their earnings per share (EPS) estimates are expected to come in around 96 cents per share on sales of $11.3 billion.

If this second quarter revenue projection holds fast, that will be a gain of about 87.6% over the same period last year. With that, Ian, I want to know what you are expecting from the second quarter earnings from Tesla. What will they reveal? Do you foresee any surprises?

Ian: I think Wall Street is bullish, as they should be. As we know, Tesla is doing very well in their auto business. One of the areas I think is going to really blow people away is their energy business. As we know, their Powerwall is one of the best and most successful new energy products in not only America but also the world.

They have already installed more than 200,000 Powerwalls around the world as of the end of May. Since then, they have launched their Tesla energy business in China. We all know China loves their Tesla cars, they are selling very well there. But I think this will give their Chinese sales an even bigger boost.

This is huge because last quarter they reported a 300% increase in their Chinese business as a whole. I think their energy business is going to do very well and we are going to see that this quarter.

Amber: I think that’s great news. From what I have from the grapevine around here at Banyan Hill, there may be a couple Powerwalls being installed on residential homes of our colleagues. So that’s adoption and shows it’s gaining traction amongst mainstream Americans.

With that, my second question is another Tesla question. I want to know, where is Tesla placed among its competitors, especially legacy automakers? Do you foresee Ford and GM taking away market share from Tesla going forward? How do you see that playing out?

Ian: Tesla’s auto business is on fire. The Model 3 and Model Y are both sold out for at least two months at this point. They can’t even meet the current demand. I saw in the first half of this year they delivered 386,000 cars, which is more than their entire 2019 deliveries.

Their auto business is doing well. In the U.S., the EV business is on fire. It’s growing exponentially. They have grown 95% for U.S. sales in the past year. Tesla, even with that market growth, still has a 71% market share in the U.S.

There might be some competitors here and there. A lot of them are startups. Obviously, you have Ford and GM that are starting to move into electric cars, but I think the ones moving into electric cars have a disadvantage. They have to reformat their entire production facility and all their operations to be fitted to making EVs.

Tesla has already been building their business around a decade now. Nobody is going to be able to compete with Tesla, as we have seen with their 71% market share, even with 95% EV growth. They are definitely in a good position right now.

Amber: 71% market share is a great number to hold fast to. Ian is our resident expert on crypto as well. I wanted to ask a question that combined Tesla and crypto. I heard how Elon Musk and Twitter’s Jack Dorsey may be meeting for a Bitcoin (BTC) event this week. 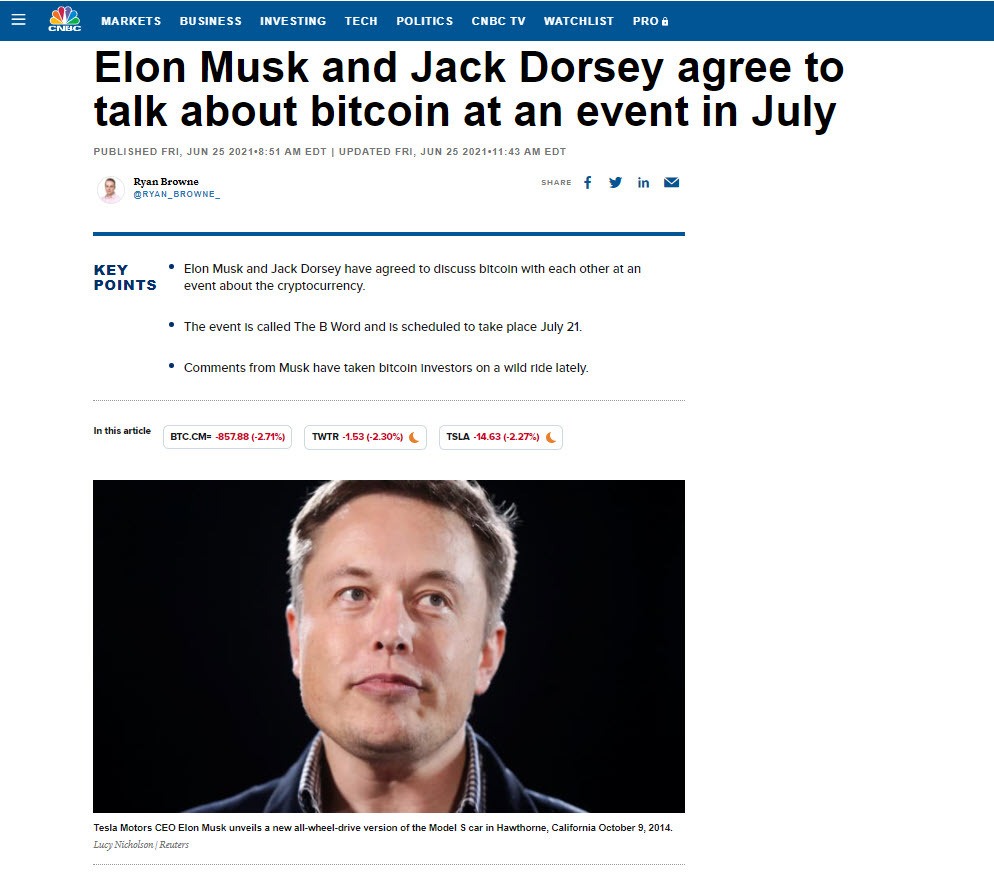 I wanted to get your take on what that combination could mean for both markets — Tesla and BTC.

Ian: It should be interesting. That’s on Wednesday I believe. As we know, Elon has been a controversial figure with BTC by saying it’s not good for the environment and so on. Actually, I think this is going to end up being a net positive for BTC and crypto in general.

Now there’s the whole BTC mining counsel that’s tracking the amount of sustainable energy used in mining BTC, but I think Elon is eventually going to warm up to BTC. We all know Tesla is about sustainable energy. They have these huge Powerwall projects with energy storage.

They have huge projects in California and Texas already. It wouldn’t even surprise me if they got into BTC mining in the near future If not the rest of this year, I think next year there is a solid chance we see Tesla get into BTC mining. This could be the beginning of that.

I think Elon is probably going to do a total 180 over the next year on BTC starting now.

Amber: I really appreciate that prediction. Did you hear that, everyone? Tesla doing BTC mining. That’s something to look forward to. Ian, thank you again for joining us again this week. We are so glad to see you. Thank you for sharing your insights.

Amber: Take care. A big thanks again to Ian for joining us again today

Now for the Tesla earnings forecast charts I mentioned earlier. I track upcoming earnings releases for Paul’s Profits Unlimited monthly research stock service. I thought for today’s Market Talk I would give you a behind the scenes of how I track them.

I often share this information quarterly with our Profits Unlimited members. So here it is.

Tesla, which is a stock in the Profits Unlimited portfolio, is set to report its second quarter 2021 earnings on July 26 after the markets close.

Analyst consensus is for the company to report an EPS of 96 cents with anticipated sales revenue of $11.3 billion. 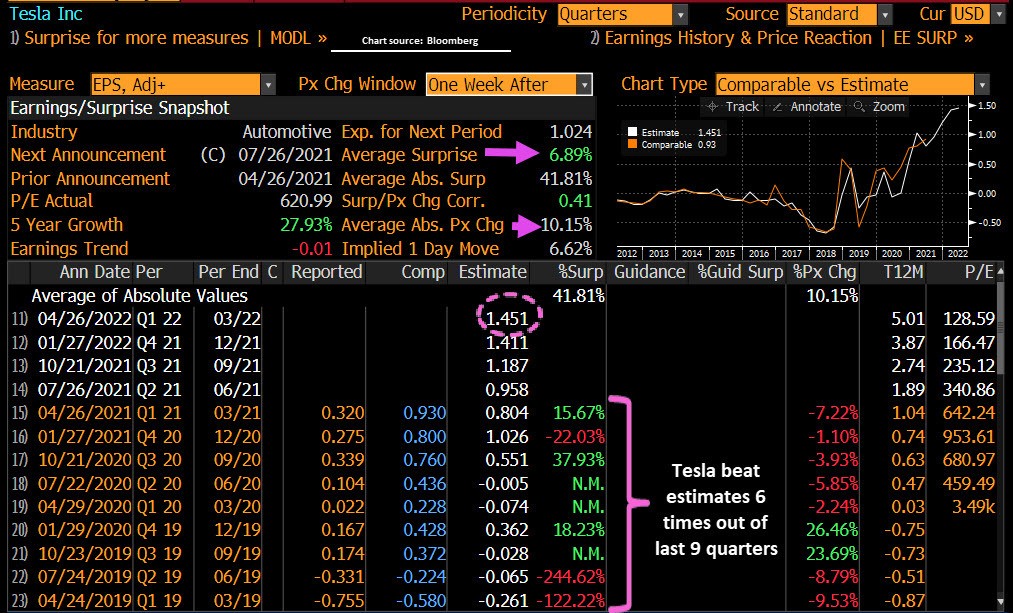 Based on its history, Tesla surprises on earnings by an average of 6.89%. One week after reporting earnings, its average absolute price change is 10.15%.

Moreover, looking out even further — Paul always shares this with the investment team — we are even more interested in what the earnings say about the future of the company looking out 12 months, 18 months or even further. I thought I would pull the chart for you. 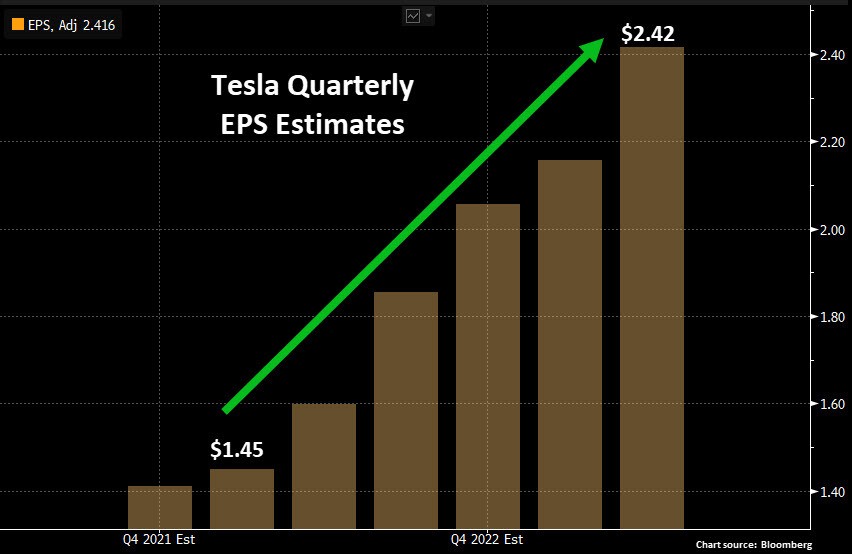 EPS for Tesla are projected to top $2.42 per share by the second quarter of 2023. So there’s even more potential on the upside to look forward to where Tesla is concerned. For more information on Paul’s Profits Unlimited monthly research service, you can visit ProfitsUnlimited.com.

You can follow Paul, Ian and me on Twitter: @MampillyGuru, @IanDyerGuru and @ALancasterGuru. I aim to post results of these economic releases throughout the trading week. Thanks again everyone for tuning in today. Thanks again to Ian for joining us.

Until next time, have a great week ahead. Take care.

Editor’s Note: We get it. The crypto market just got hammered. A lot of our stocks haven’t bounced back … yet. So we completely understand why you might be hesitant to jump in.

But if you’ve been around for long enough, you know our Strong Hands mantra! Too many people sell when instead, you should be BUYING.

Right now, Ian’s tracking certain cryptocurrencies that can soar as much as 20 times more than bitcoin on a percentage basis. He’s already released his first trade recommendation, and it’s still a buy.

If you’re ready, here’s your Strong Hands action to take: To unlock Ian’s first trade recommendation and get ahead of his next, you just need access to Crypto Flash Trader through this link. 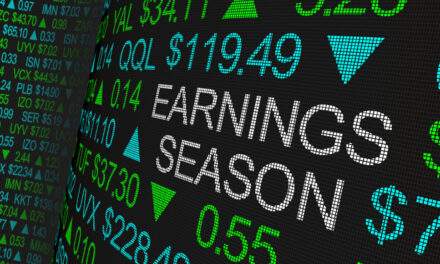 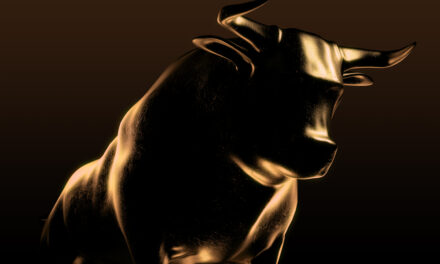 Multi-Millionaire in 10 Years? He Thinks YES!