Stocks Are Down: Let the Strong Investors Win 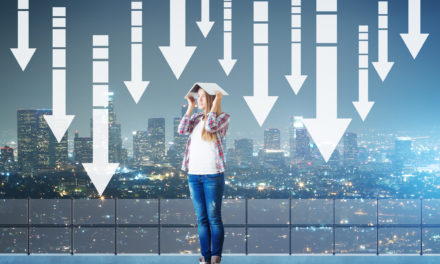 The markets are down today. And we’ve been here before.

The trade war … impeachment talk … the recession that never came…

But you know what else?

NAME wrote in to tell me that because he hung in there through the rough end of 2018, he saw his portfolio rise 71% in 2019. That’s his payoff for following our guidance through this kind of panic.

I call it “Strong Hands.”

When markets are down, investors’ natural instinct is to sell everything and question the market’s future. But we do the work — the deeper analysis to see past surface-level, knee-jerk news cycle hype.

Having Strong Hands means having conviction — holding on through volatility to get the incredible gains many miss out on by selling scared.

And I believe the America 2.0 bull market is strong and set to climb despite today’s moves.

Check out this week’s Market Talk to learn about the one economic signal leading America 2.0 through this volatility:

Last week U.S. homebuilding permits jumped in January, rising to their highest since 2007, a 13-year high. 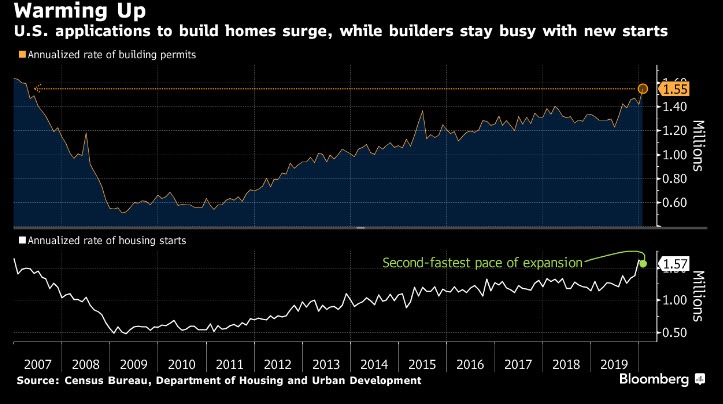 This is all while new home construction starts continued at a healthy pace, recording the second-fastest pace of expansion, coming in at 1.57 million rate.

Low mortgage rates and a robust labor market are the fuel for this housing demand.

This all signals steady U.S. economic growth in early 2020. The surge is attributed to rising homebuilding permits, higher consumer confidence and a steady job market. 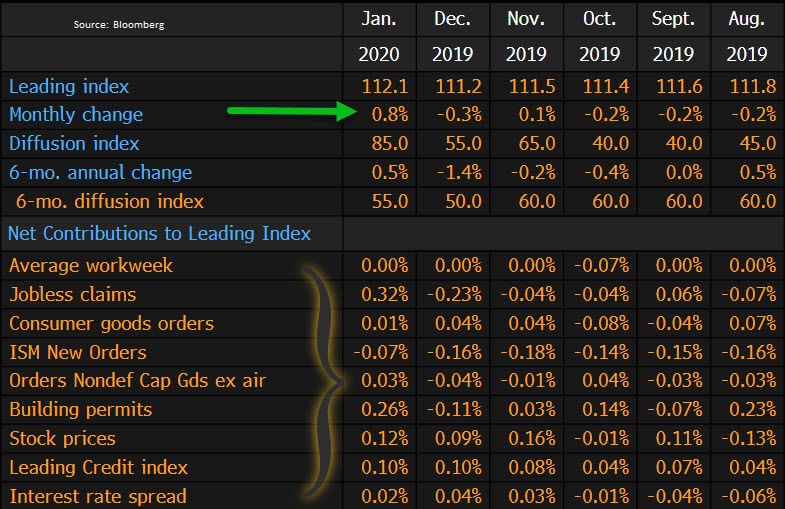 These indicators include jobless claims, consumer goods orders and the leading credit index.

Where upcoming economic releases are concerned, there will be a total of nine major releases this week. 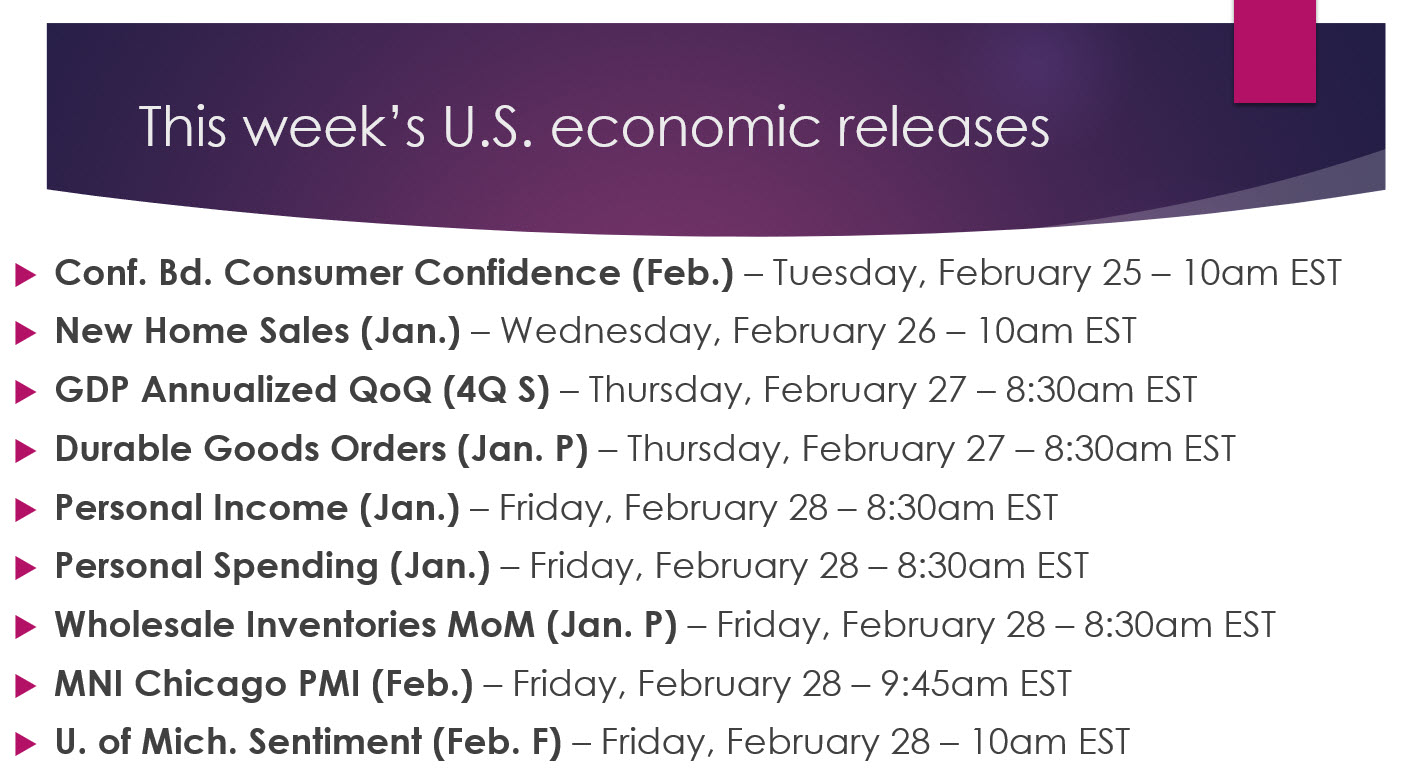 Supercapacitors Will Shift EVs into Gear

CleanTechnica is reporting that supercapacitors could accelerate the electric vehicle (EV) revolution.

Whether you’re aware or not, EVs are still using a technology in their batteries that was invented in 1859: lead acid batteries. T

Eliminating lead acid batteries altogether is a quest for the EV world.

As a recent article on Bloomberg points out, Tesla CEO Elon Musk relocated to the Silicon Valley in the first place just to research for his PhD studies at Stanford to find a viable alternative to lead acid batteries.

That alternative is supercapacitors, also known as supercaps. 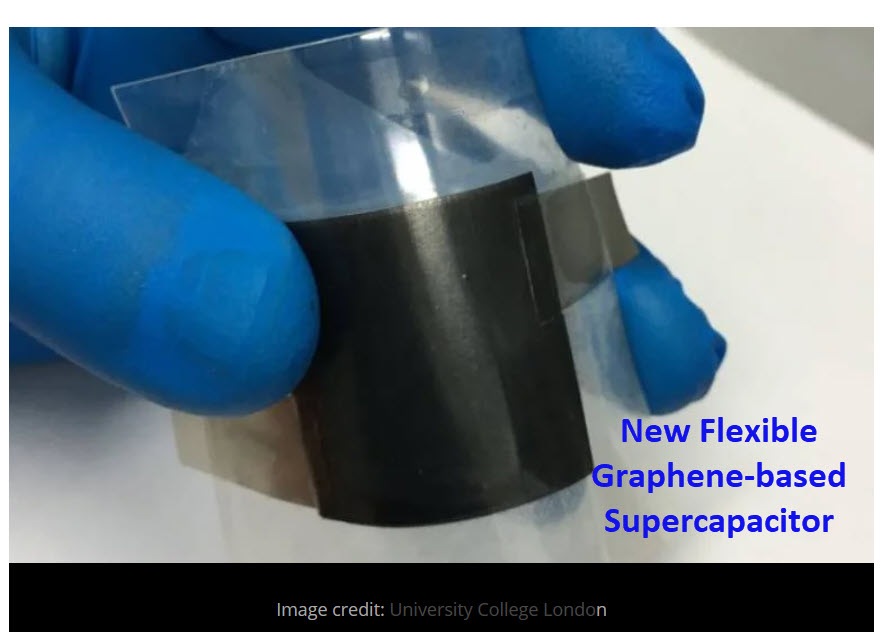 CleanTechnica states that, “scientists at the University College of London and the Chinese Academy of Sciences claim they have developed a new flexible graphene-based supercapacitor that can safely charge at a high speed and accumulate a record amount of energy and store it for a long time.

“The new supercaps use an innovative multi-layer graphene electrode. It can bend up to 180 degrees without losing its performance and does not require a liquid electrolyte, which minimizes the risk of explosion. The new device could replace batteries in smartphones and power wearable internet devices.

“Because it’s a much lighter and smaller material than lead acid batteries, it could also replace the 12 volt standard battery used in all EVs today.” [1]

According to a recent CoreLogic Insights report, homeownership rates have jumped as millennials have stepped up buying and rental vacancy rates are at a 34-year low. 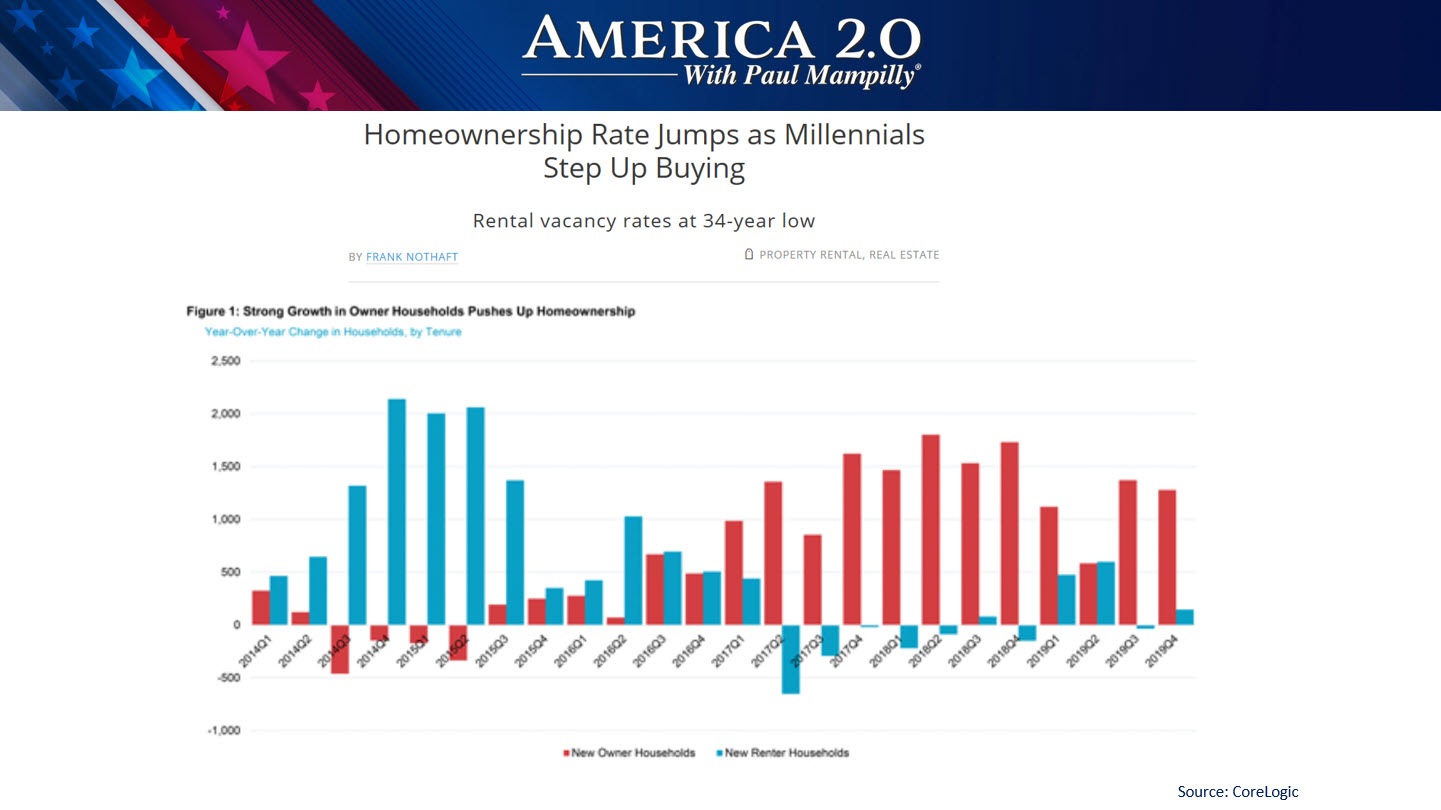 Also per the report, the overall U.S. homeownership jumped to 65% in the fourth quarter of 2019, the highest in 6 years.

Investors Miss Opportunity When They Panic

Today, the Dow plunged 1,000 points amid fears of the coronavirus. Every market index down 2% or 3%.

Here’s the thing: we have gone through volatility before.

In 2018, people were worried about the recession that never came, the inverted yield curve, rising interest rates, the trade war and impeachment.

We know many people are going to be scared.

Since the middle of 2019 we have been in a straight-up market. That’s been driven by the fact that so many people sold out so much stock in 2018.

As they came back in, they bid prices higher.

We could go through a period where some number of people take profits.

That will drive prices a little lower. 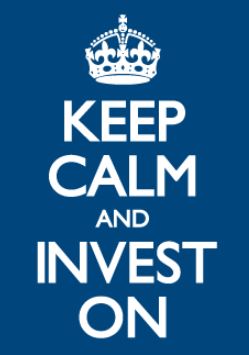 However, the America 2.0 bull market is still going on. It’s going on right now.

You know if you watched our America 2.0 video presentation we have two big predictions in there.

One of our predictions related directly to the stock market, specifically which America 2.0 stocks that will carry the Dow, S&P 500, Nasdaq and all the indices to much higher levels.

We recommend you watch our America 2.0 presentation.

It lays out the roadmap for America 2.0 and invites you to subscribe to Profits Unlimited, our flagship newsletter.

We have a lot of the Rules of the Game we provide in guidance in Profits Unlimited to our readers.

They include keeping a little bit in cash for exactly days like this.

It acts as your volatility buffer and emotional security blanket. When you go through periods like this, you get fearful.

That’s just part of being an investor and a human being.

However, I believe the bull market is still absolutely on.

The America 2.0 market is in its early stages. There is so much more to go.

We are bullish. We are optimistic. We are positive. #BOP