This is an opportunity of a lifetime!

But thanks to the magic element of scarcity, it’s going to SOAR in the market’s rebound.

The U.S. is taking the necessary steps to restock the world! It’s the biggest supply-demand moment in our history.

The surge we’re seeing now in our America 2.0 stocks is just a shadow of what’s coming.

And because my three R’s are so crucial to America 2.0 — and being a speculative investor — I believe my team and I have found the most unique investment opportunity for you right now:

As Paul states in our investment team calls, the Three Rs are at play right now in the U.S. economy.

His Three Rs are some of the main drivers of America 2.0. They are Repurchase, Require and Restock. The Three Rs is what the U.S. economy is going through right now and for years to come as whole categories of products are being sold out and not being replaced fast enough.

As I’ve noted before, the restocking of high-demand goods is at an all-time need right now. In addition, shipping rates between the U.S. and China are skyrocketing because we have to restock.

As Paul sees it, normally U.S. consumers would get their products from China, but China’s economy is just restarting.

They shut down earlier this year but are in the later state of reopening. This is happening in every country. We have never experienced a moment where the world is consuming and not making.

This creates what Paul calls a “magic element of scarcity” that is pure gold. We live in a world that has gone through a couple decades of excess capacity.

To have that capacity just run out is notable. Now we are seeing this magic element of scarcity which means demand is going to run through fewer firms.

We will have sales growth and profitability. It’s setting up for a massive boom that will benefit most sectors.

We’re going to make sure Bold Profits subscribers are invested in the fastest sectors — these are the America 2.0 sectors. While these sectors are seeing some growth today, it’s a shadow of what’s coming over the next year or two.

To show how manufacturing is picking up right now, look no further than last week’s release of September’s New York State Manufacturing. 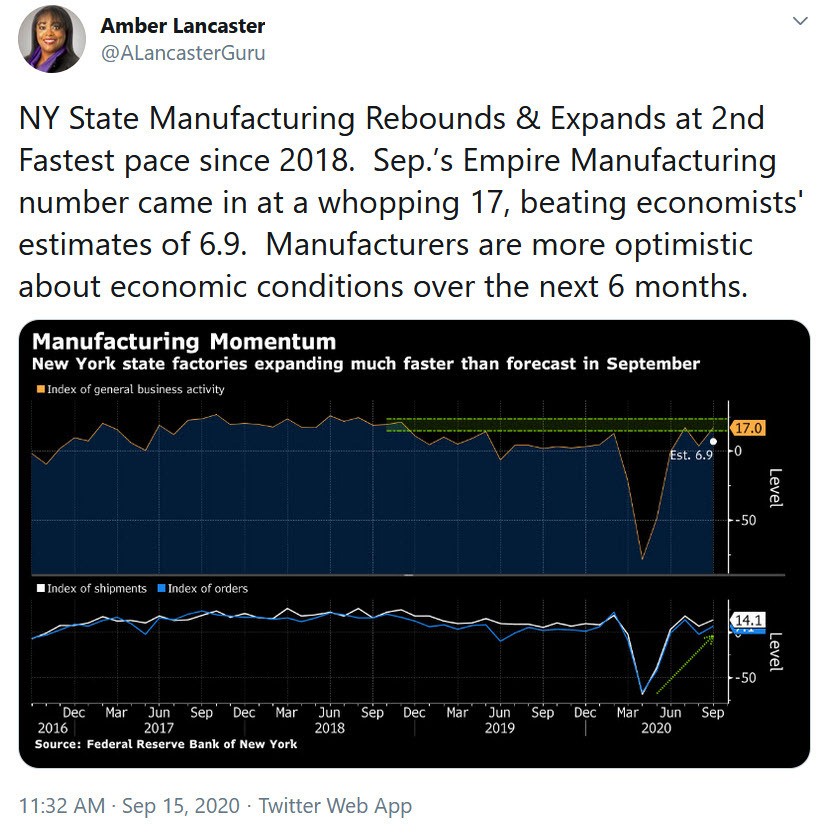 As Paul aptly noted in our latest investment team call,

“This manufacturing gauge actually represents upstate New York in Rochester, Buffalo and all these places that have been in a decline for 10 to 30 years. Guess what — they are coming back. They are coming back to life.”

Another driver for current and future restocking of the U.S. is in the household formation sector. 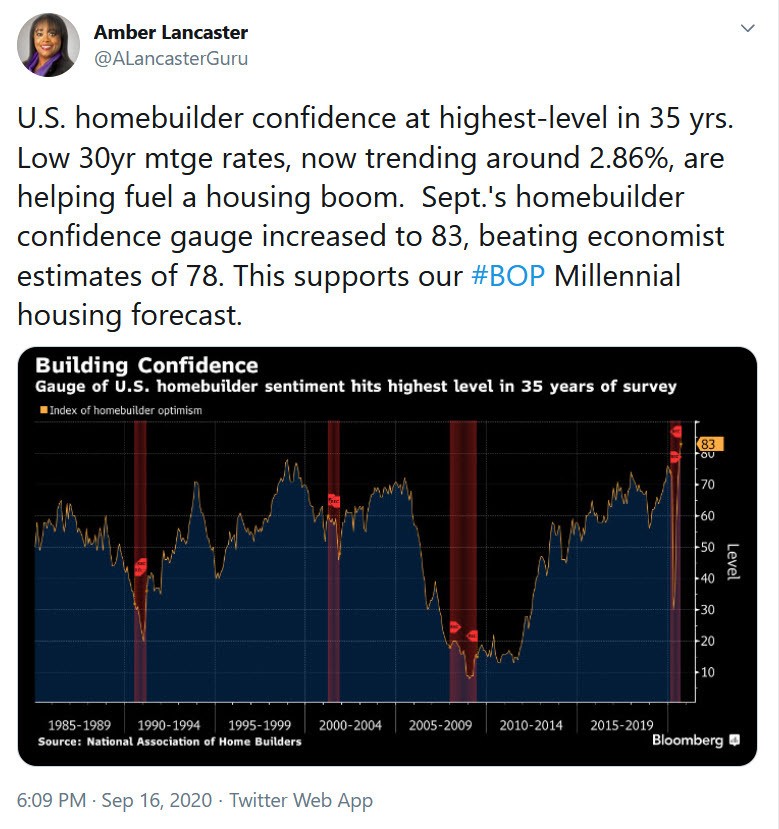 Low 30-year mortgage rates, now trending around 2.86%, are helping fuel a housing boom. September’s homebuilder confidence gauge increased to 83, beating economists’ estimates of 78. This not only supports our #BOP stance on the millennial and gen Z housing forecast, but also Paul notes,

Right now one area that Paul and I are looking at as being one of the big winners of the lockdowns is shipping.

Everything was closed up and now there’s a huge demand to restock everything that has been depleted.

They are the second biggest economy in the world and they had a double dose of these lockdowns.

Now they are starting to produce and export even faster than they were pre-lockdown. Shipping is seeing a ton of business right now.

On the demand side you have China with bigger demand than ever, especially after two years of trade wars.

They really need these shipping companies to haul out these good, especially perishables and agricultural goods. They need a lot of companies to bring them all of their imports.

They are the biggest steel manufacturer in the world. They make about 62% of the world’s steel. They need lots and lots of iron, which comes from other huge economies like Brazil and India.

It’s a global play, but China is a big driver of it because they had the misfortune of having their lockdown and when they reopened everyone else was locked down.

That is on the demand side. Supply wise we are seeing the same thing we saw with homebuilding after the financial crisis and real estate bubble or whatever you want to call it in 2007 and 2008.

The demand for homes was so small so everyone just stopped making them.

These companies don’t want to make extra ships because they aren’t seeing demand in the market at this point. That’s going to translate into a shortage of newer ships. And especially when you have all the new environmental regulations now, older ships can’t be used.

They have to go through expensive procedures to make them environmentally friendly. We are running out of older ships. A lot of them are being scrapped for parts because they are not useful or don’t meet the regulator requirements. It’s really not worth putting more money in them at this point.

A shortage of ships and an increase in demand for commodities and goods around the world are the two things creating a supply crunch in the shipping industry.

Beginning in April we started recommending shipping companies. Their stocks have been devalued to a point where it’s just nonsense.

Basically, they are being priced for bankruptcy. We don’t see a lot of them going bankrupt. Of course the ones we recommend we don’t see going bankrupt any time soon. They have a lot of cash compared to what the company is valued at and they have all these ships.

They have had to sell a couple ships to growth their cash to get past this tough period. Once this period passes, it’s going to be all upside from here.

The market is going to take that into account and these shipping stocks, we believe, are going to skyrocket.

Regarding some of trading strategy for the Secret Portfolio and about the closed gains, not naming any companies of course, we have a couple different sub-strategies.

One of them would be special situations. Shipping is a good example of that. A shipping trade doesn’t come around too often. Usually these trades are pretty stable, but in a time like this where things are at rock bottom it’s a great opportunity.

It’s a special situation to get in on an investment that normally doesn’t have that much upside. Another one we’ve been doing is SPACs, which is an alternative for companies to go public.

Instead of the expensive, highly regulated IPO process, there are these new companies called SPACs which say, “I have $100 million and I want to go find a private company to bring public.”

That is becoming a hot method for private companies to come public. Lots of America 2.0 companies are doing this. There are plenty of electric vehicle companies, battery companies and 3D printing companies that are going public via SPAC.

Special Purpose Acquisition Companies (SPACs) have been really crushing it for us. We have a number that are still in our portfolio. One of them, which I can’t name, is up 413% as of last Friday.

These are a real opportunity we are seeing in the market. A lot of these private companies have flown under the radar.

A lot of people aren’t aware of the America 2.0 trends yet and what potential they bring. When these companies go public everyone says, “Wow, this company is worth way more than we thought when they were private.” The stocks have been flying.

These are 10 of the most promising stocks Paul has ever found. Each are emerging leaders in a few of the sectors that Paul sees as targeting some of the decade’s biggest gains. All you have to do is click the link in the description to get the details on how you can sign up and invest like Paul does in the markets.

P.S. After you watch today’s Market Talk with Ian and Amber, you’ll want to hear this. If you haven’t signed up to attend my “Secret Portfolio” Summit … click here and sign up now. It only takes a couple seconds and I don’t want you to miss it. The event airs tomorrow at 8 p.m. EDT.

I’m going to show YOU how to invest the way I DO … and how to go after the biggest, best returns of the next decade.

You’ll discover the Three Guiding Principles I use anytime I invest my money. I’ll reveal the FIVE sectors I’m targeting that I believe hold the greatest potential over the next 5 to 10 years… And best of all, I’ll tell you about the 10 stocks inside my secret portfolio.

Click here to save your spot for this free event now! 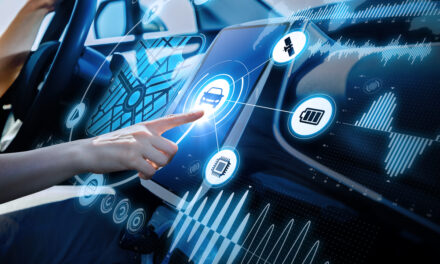