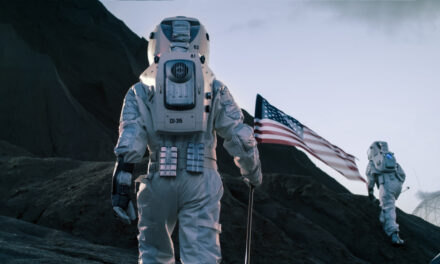 We have a renewed spark for space exploration today. Several launches have already happened this year and there’s more scheduled for 2021!

We’re going to get there thanks to stacking America 2.0 innovations — chips, artificial intelligence (AI) and 3D printing.

The future is here and now … this will be one of the biggest investment opportunities of the decade.

That’s why I have a special new report for you coming tomorrow. It has my top space stocks you can buy for this revolution.

Until then, keep reading to see why our mega trends are going to play a HUGE part in our new space race.

America 2.0 will win us the space race.

It’s partnering with 3D-printing companies to innovate the way it develops new space-travel strategies and equipment.

Space and 3D printing are investments of the future. Yet, the future is here and now … unfolding right in front of us.

When you get to the core of America 2.0, 3D printing is going to be a must-have.

Now is the time to upgrade your portfolio.

3D printing is my No. 1 pick for 2020 and years to come. And with NASA’s stamp of approval, demand is going to rocket!

Check out today’s Market Talk to find out how NASA’s using 3D printing to take the space race to new heights and how you can get our top 3D-printing stock:

An Investment for the Future: 3D Printing

3D printing is a growing manufacturing technology with phenomenal potential in the industrial production sector.

This technology is transforming industrial production by creating products that are lighter, stronger quickly produced and made-to-last. 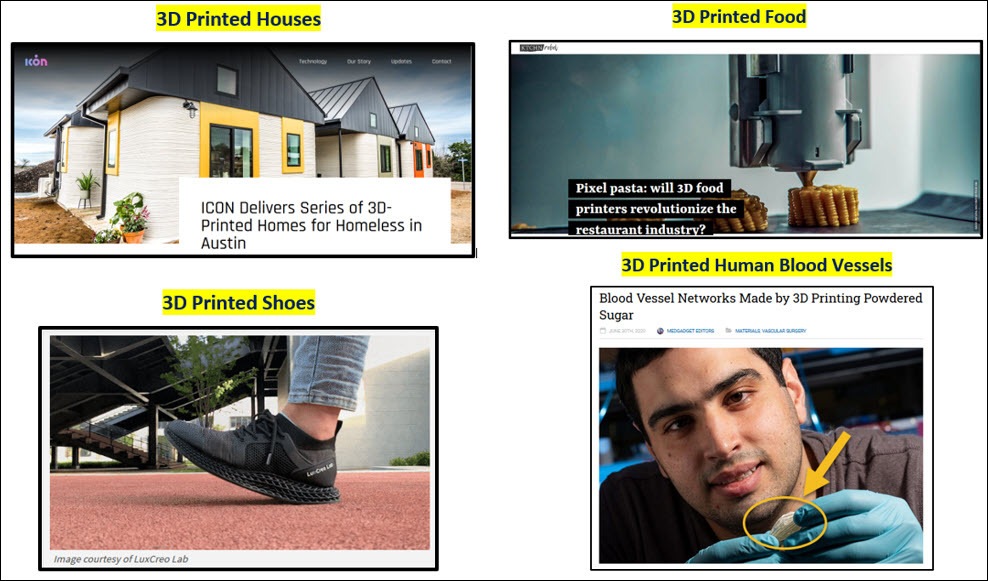 From houses to shoes, food to alternative human blood vessels, the burgeoning 3D printing industry is at the heart of America 2.0. 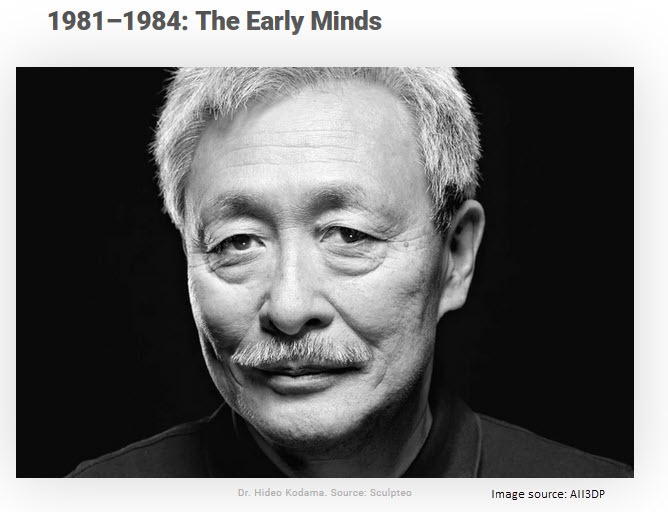 According to Me3D, the earliest record of the 3D printing process was completed by Japanese inventor, Dr. Hideo Ko-dama in 1981. He, “created a product that used ultraviolet lights to harden polymers and create solid objects.” This was a steppingstone to stereo-litho-graphy, which is the process for creating 3-dimensional objects by using a computer-controlled moving laser beam.

Since then, 3D printing has been on a prolific advance. From the 1980s when stereo-litho-graphy was officially invented, to 2009 when patents for many 3D printing technologies expired, opening the floodgates for startup companies to take 3D printing to the world. 3D printing is now a billion-dollar industry and marching its way to be a key player in most industries worldwide.

Valued at $16 billion this year, the global 3D printing products and services market size is projected to more than double or grow by 155% to $40.8 billion by 2024. 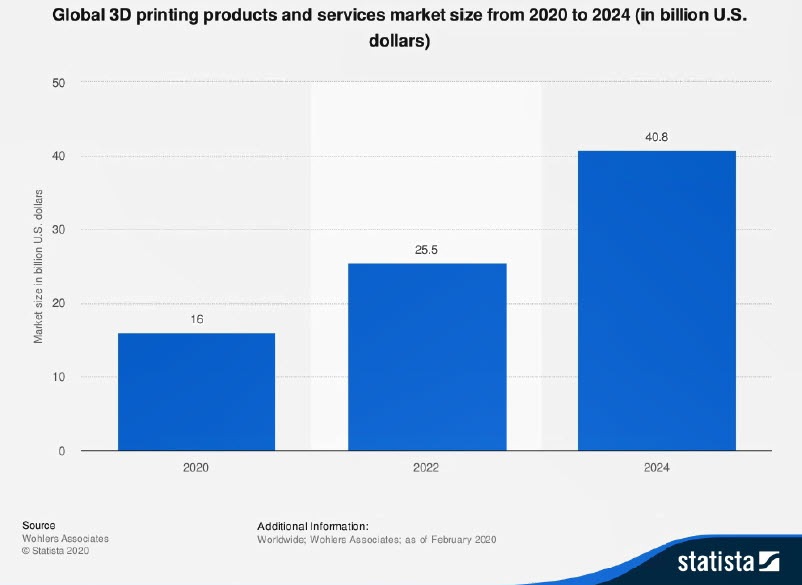 One industry recognizing how transformative 3D printing tech is, is the space industry.

As you all know Elon Musk’s SpaceX Falcon 9 rocket mission to the International Space Station, carrying the company’s Crew dragon spacecraft with two astronauts on board launched from Kennedy Space Center in Florida on May 30.  This mission is known as Demo-2.  After two months at the international space station, these astronauts are expected to return using SpaceX spacecraft on August 1. After this Demo-2 mission which will provide a human-rating for Crew Dragon & Falcon 9, SpaceX and NASA are aiming to launch the 1st official operation mission of the SpaceX Crew Dragon with four astronauts aboard in late September. This mission is known as Crew-1. If all goes according to plan, per Tech Crunch, in the eyes of NASA, the Crew-1 mission, will be “the first considered standard part of SpaceX’s contract to provide regular astronaut transportation.” 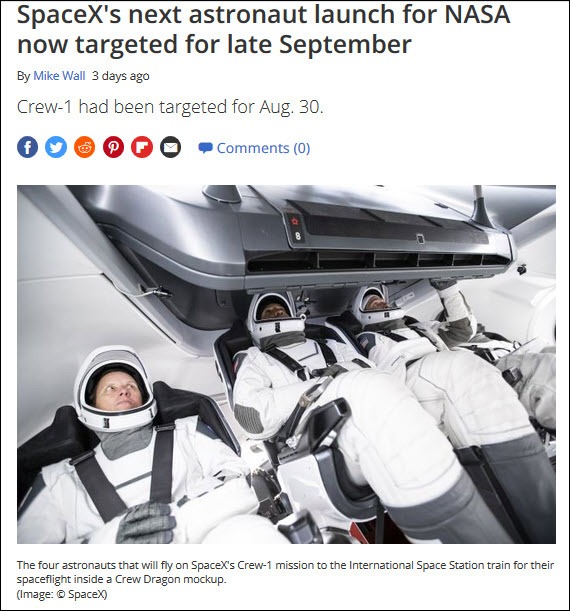 One special attribute of these space missions is that 3D printing is part of the new space race.

For example, the Demo-2 mission astronaut helmets where 3D printed and included, per 3Dprint.com, integrated valves, mechanisms for visor retraction and locking, as well as microphones within the helmet’s structure. 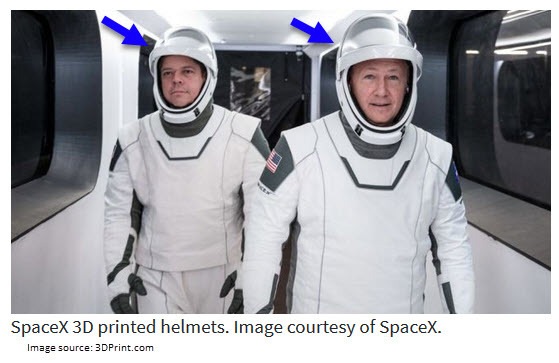 But it doesn’t stop there.

NASA recently announced that 3D Printing will be part of the new era of space exploration, taking off now.

With disruptive technologies, like additive manufacturing (AM), proven to be critical to plenty of space applications, NASA has recently announced it will support 27 3D printing technology proposals.

This year, many selected companies will use 3D printing technology as the basis of their projects, which range from additively manufactured thermal protection systems for space vehicles to the creation of an AM facility for the International Space Station.”

Two 3D printing startups are standing out in this new endeavor.

As you can see, 3D printing is not only a breakout star in housing and industrial manufacturing but also in the new space race.

Simply put, you won’t want to miss out on this 3D printing manufacturing tech. As Paul Mampilly noted in this golden nugget from our latest investment team call, we must extrapolate the past into the future. The idea today that space can be a large industry is preposterous as the idea that commercial airlines, these rickety planes people were experimenting with in 1914, would pave the way to passenger commercial flights not even 10-years later, with the Air Commerce Act of 1926.

Space and 3D printing as investments of the future is here and now. When you get to the core of America 2.0, 3D printing is going to be a must-have.

Now is the time to upgrade your portfolio.

3D printing is Paul’s No. 1 pick for this year and years to come.

Editor’s Note: 3D printing is Paul’s No. 1 pick for 2020. And with it teaming up with space, a new mega trend … well the sky really us the limit for investors. Paul’s been watching this economic upgrade for years. And he’s finally found a way in. The data points straight to a flashing “buy” with both hands, and certain stocks could potentially surge more than 1,000%. You can position yourself at the forefront of this economic upgrade today. Watch Paul’s tell-all interview here. 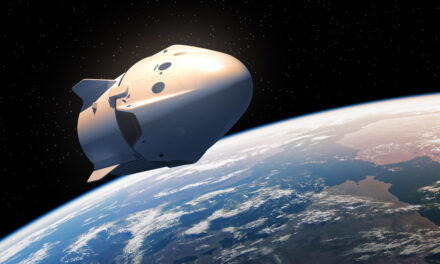 Space: Buy in Before This $1 Trillion Industry Takes Off