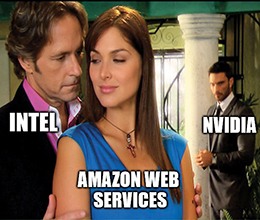 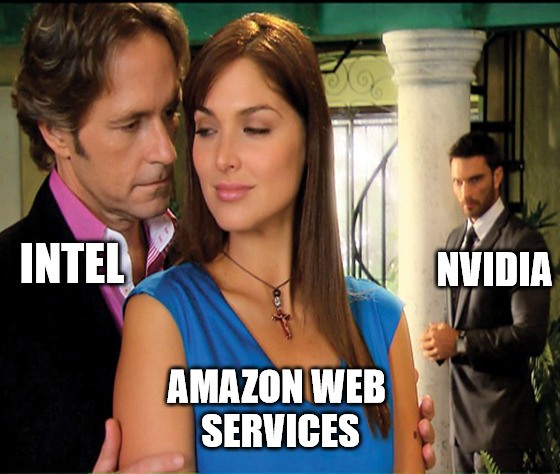 Great, now that song’s stuck in my head. Thanks, Mr. Great Stuff!

Welcome to my world.

Anyway, if you didn’t gather from the Camila Cabello lyrics, Intel’s (Nasdaq: INTC) Habana Labs business just signed a cloud and data services deal with Amazon Web Services (AWS). The deal’s terms weren’t released, but that hasn’t stopped Intel from crowing about it to anyone who will listen.

And for good reason … Intel shelled out $2 billion for Israel-based Habana Labs back in December 2019 solely to bolster its artificial intelligence (AI) and cloud-computing offerings. One of the keys to that goal is Habana’s (ooh na-na) Gaudi AI training processor.

What’s so special about Gaudi? This puppy is fine-tuned specifically for deep learning training workloads. Think language processing, object detection and classification, recommendation and personalization — you know, all the things an AI is supposed to do.

These are also all the crucial requirements for cloud and data center processing. With the AWS deal, Intel made no secret that it’s gunning for Nvidia’s (Nasdaq: NVDA) cloudy crown.

“We have to realize that we’re starting from zero and Nvidia is 100%,” said Habana (ooh na-na) Chief Business Officer Eitan Medina. “We’re starting with a very big guy that has the longest experience … It will take time, but I believe we’re on the right path.”

Medina, who wouldn’t confirm or deny that he was funky and cold, also declined to comment on future Habana deals.

From an investor’s standpoint, the AWS deal is a big … well … deal.

We all knew that Intel wouldn’t rest on its laurels despite a few production setbacks. But, before we get too excited about the company’s Habana (ooh na-na) success, remember that Intel fights at least two major competitors in the data center space.

The first is current market leader Nvidia. Everybody’s gunning for the top dog … but Intel also has to seriously worry about Advanced Micro Devices (Nasdaq: AMD).

AMD is stealing data center and enterprise market share right from under Intel’s nose. I’m sure that Intel believes it can stave off AMD’s assault by targeting Nvidia.

But while Intel’s heart is in Habana (ooh na-na), it needs to keep its head out of the clouds (so to speak) while going after Nvidia so that AMD doesn’t continue to eat its lunch.

INTC gained less than 1% on the news, while rival NVDA shrugged off the competition and gained roughly 2%.

This is about as complicated as a telenovela. But rest assured: Great Stuff will keep you on top of all the drama, from Habana to East Atlanta (ooh na-na).

But if you’re tired of all the Big Data drama — or if your heart’s just not in Habana (ooh na-na) — there are plenty of other opportunities with much less baggage.

For instance, there’s one California-based company that cracked the code on a Big Data niche called “data refining.” I say “niche,” but with a potential market valuation of $229 billion by 2025, that term just barely fits.

Have I got your attention yet? Good. 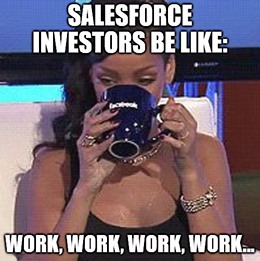 I’ve always had this $50 billion dream for Salesforce, so let’s see us go there.

Those are the words of Salesforce.com (NYSE: CRM) CEO Marc Benioff after he promised over $25.5 billion in revenue next year. Quite inspiring if you’re a CRM investor. There’s a lot to unpack with Salesforce, so let’s hit the highlights.

The company’s third-quarter revenue rose 20% year over year to $5.42 billion, driving earnings to $1.15 per share. Both figures blasted Wall Street’s expectations for sales of $5.25 billion and earnings of $0.75 per share.

The company also lifted fourth-quarter revenue guidance to between $5.66 billion and $5.67 billion, expecting 21% growth in fiscal 2022.

That’s the beat-and-raise quarter CRM investors hoped for; and yet, CRM fell more than 7% today.

Why? Well, you can blame that on Slack Technologies (NYSE: WORK).

Salesforce confirmed during its earnings release that it will buy Slack for $27.7 billion. That’s a far cry from its billing as “one of the biggest software acquisitions ever” that we reported on Monday, but $27.7 billion is still nothing to shake a stick at, as my grandfather would say.

Big spending like this typically makes investors nervous. So, the reason for today’s decline is twofold: profit-taking and a $27.7 billion purchase.

But fear not, CRM investors! The stock just filled in its August post-earnings gap higher. This is a technical development that often has bullish implications. In layman’s terms, today’s drop is a good CRM buying opportunity. 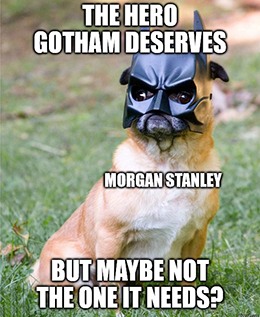 If you haven’t heard of Palantir Technologies (NYSE: PLTR) yet, then you probably don’t get your investing information from Reddit.

This stock is all the rage on r/WallStreetBets … if that tells you anything.

The company specializes in software for the U.S. intelligence community.

Its main product, Palantir Gotham, is designed specifically for U.S. government operatives in the defense and intelligence sectors, including secure data handoffs and threat identification.

PLTR went public back in September, and the stock skyrocketed more than 264% to an all-time high of $33.50 on November 27. You could almost cut the PLTR hype with a knife.

To translate that into the common tongue, PLTR’s price is out of touch with the company’s fundamentals.

There have been no new contracts awarded. No major sales growth. No indications of deals on the horizon. Despite this lack of news or promise of additional revenue, PLTR skyrocketed on speculation.

Weiss did lift his price target from $15 to $17 but maintained that PLTR is overvalued at current levels.

Given the popularity of PLTR on Reddit and Robinhood, I don’t see this hype dying down anytime soon.

There will certainly be opportunities for speculators to profit off PLTR options, but regular investors should remain wary of the stock for the time being … at least until all this hype dies down.

The Ugly: Speaking of Hype… 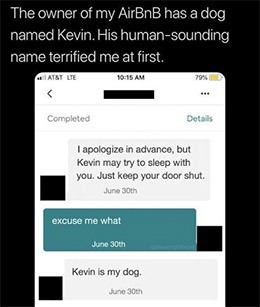 If Palantir was an anticipated IPO, you’d think that Airbnb’s launch on the public markets is the Second Coming.

Funny enough, we haven’t talked about Airbnb since, well, yesterday.

Airbnb recently announced that it expects to debut later this month, pricing ABNB shares between $44 and $50 for a total $35 billion valuation.

So … why IPO now? Is it because Airbnb, surprisingly, had a profitable quarter (after layoffs)?

Is it the vaccine news, post-election confidence, market highs and whatever other exuberance is floating around?

Haven’t you seen the vaccine news? Pandemic’s over now, etc. Travel stocks are back for good, woohoo!

I don’t buy it for a second … much like Great Stuff isn’t buying ABNB when the shares debut. And that’s the key there: when they debut.

We’re but toe-deep in the pandemic winter, which remains the great unknown — the variable that can (once again) uproot every hotel, motel, cruise line, airline and travel-adjacent stock.

Axios sums it up well that Airbnb’s “cross-border business basically disappeared with the pandemic, as did much of its urban apartment rental business.” Suburban and rural rentals are up, as you’d expect. But, let’s not shrug off Airbnb’s other revenue stream disasters that could worsen at a moment’s notice of more lockdowns.

Even though Airbnb’s revenue bounced back this last quarter, the company’s income isn’t moving in the right direction at all, with overall net losses more than doubling this year to reach $697 million.

It’s proof that despite rising optimism, the pandemic still plays out — in our lives, headlines and travel stocks — until vaccine confidence and distribution catches up with investors’ hopes. And you better believe ABNB will see volatility all throughout that.

I hear you, I hear you. “It’s a tech disruptor something-or-other…”

We won’t dive down the “tech-not-tech” rabbit hole today. And we’re sure not touching on Airbnb’s WeWork-esque hype vomit: “We have helped millions of people satisfy a fundamental human need for connection, and it is through this connection that people can experience a greater sense of belonging.”

If you’re feeling warm and fuzzy enough to buy in, just remember that Airbnb floats in the pandemic breeze like a house-sitting duck. Which, for the optimists out there, means you’ll likely have a more reasonable entry point for ABNB if the stock’s initial rally isn’t overly stupid, speaking technically here.

And wouldn’t you know? That brings us right to our latest poll…

Huzzah, we’re here! Another week, another poll for your awaiting eyes and inquiring minds.

With Airbnb on the IPO agenda, what do you think of the hospitality and travel company’s decision to go public smack dab in the middle of a pandemic?

And thanks for the laughs and much-expected food debates in our inbox. If you haven’t hammed it up with us at GreatStuffToday@BanyanHill.com, you’re missing out. Each week, we do this thing called Reader Feedback — and it goes down tomorrow.

By the way, thank you to all of you who voted in last week’s. If you pride yourselves in the turkey-tearing tradition, kudos — you’re just like 84% of your fellow Great Ones. Another 10% of you went the ham route — it’s Honey Baked or nothing for me, thank you very much!

This is pretty complicated, but here goes: You write in … and we write back! The complicated part? We can’t do $&%* if you don’t write in, so hit our inbox with your best shot — market-related thoughts or otherwise. 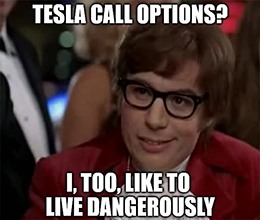 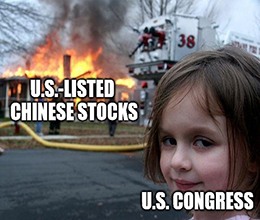