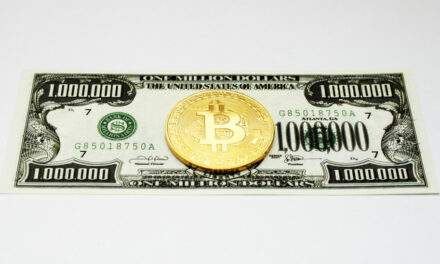 This market is prime for bitcoin to soar higher. So, did you sell or are you HODLing?!

And we’ve got a new bitcoin prediction for you…

You can see why we’re so bullish on bitcoin and what will take it to $350K this year and eventually to $1 million:

Today, Ian Dyer, Senior Investment Analyst and editor of Crypto Flash Trader and two elite options trading services, is here to answer questions on why institutional buyers are scooping up Bitcoin right now and what it means for Bitcoin’s future price, and if retail buyers should hold their Bitcoin for dear life.

Plus, we’ll talk about the latest developments in China’s digital yuan currency and if it can eventually challenge the U.S. dollar’s dominance. We’ll find out. Let’s get started. Ian, thank you so much for joining me. How are you today?

Ian Dyer: Doing well, Amber. Thank you for having me. Good morning.

How Is Bitcoin’s Future Looking?

Amber: Good morning and good to see you as always. Just remember, Bold Profits Nation, if you haven’t done so already and you like this content, please give us a thumbs up. It helps support the channel. Also, remember to share this video and subscribe as we’d love to have you on this investment journey.

Ian, there is lots of news on Bitcoin (BTC) since we last talked. I’d really like to get your perspective. My first question regards this article from CoinDesk that states,

“Bitcoin worth $1.2 billion leaves Coinbase in a sign of persistent institutional adoption. All said, institutions focused on long-term horizons seem to be unperturbed by Bitcoin’s volatility, while retail leveraged buyers are selling.”

Ian, why is this happening and what does it mean for BTC price in the future?

Ian: This is how it goes when BTC is down and people have forgotten about it and a lot of short-term holders have sold. The people who have the long-term view and buy over time are consistently adding more BTC. It’s getting more scarce.

The $1.2 billion coming out of Coinbase was definitely more than you would usually see. I’m not sure why that happened, but 63% of BTC has been held onto for more than a year. The long-term holders are still dominating the market. Despite the fact we have seen the price come down recently, from a supply standpoint BTC has never been this bullish before.

It’s good to see. As more BTC come off exchanges it minimizes the supply even more and creates more upside as demand comes back in.

How Could Bitcoin Hit The Millions?

Amber: I’m glad you were able to contextualize that and give us some perspective. My second question has to do with this headline from Cointelegraph that caught a lot of attention online. 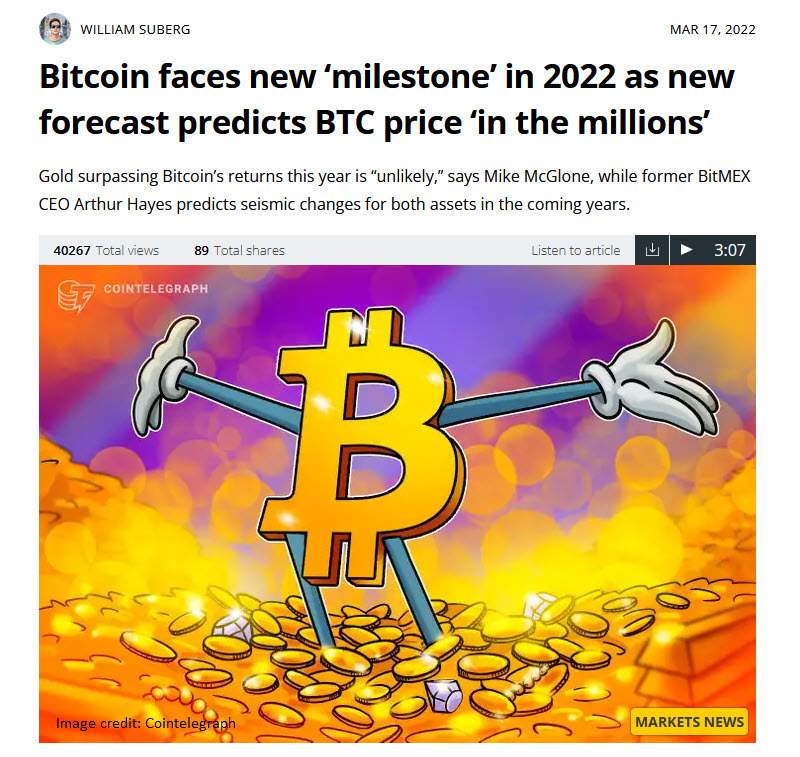 Ian, do you share this prediction? If so, could you present some scenarios as to how and why this could happen?

Ian: From what I have seen, I think these are predictions for 2030. I think it’s possible BTC could hit $1 million per coin by then. Some of the scenarios, from a retail standpoint there are people who have held for years and don’t plan on selling. Like I said, 63% of the supply has been held onto for more than a year.

These long-term holders don’t sell unless BTC is going up in a straight line like it did in late 2020 and early 2021. But even then, they didn’t sell that much. Every time there is a strong bull market in BTC, even more of the supply gets bought out by very long-term holders who aren’t going to sell any time soon.

That’s good for the price. It has an exponential effect. We’re also seeing and going to continue to see an exponential effect in demand from institutions and governments. We’ve seen a few companies buy in. Tesla, Block and MicroStrategy have put billions of dollars into BTC.

El Salvador have started to buy. They are a small economy. They aren’t going to make a dent in the overall supply any time soon. I think this year we will see some other countries adopt BTC and start to add it to their reserves. Between balance sheets and government currency reserves, I think there’s a multi-trillion-dollar market for BTC.

That wouldn’t even cover 20% of the total amount of cash these entities already hold. It would push the price up quite a bit if $2 trillion went into BTC. It would probably create a price of at least $500,000 to $1 million. I think we’re probably going to see something like that in the next five years.

By 2030, I think $1 million is definitely doable. Based on supply getting smaller and smaller over time and demand right now barely scratching the surface from institutions and governments, it’s going to grow exponentially. It really creates a scenario where $1 million per coin is possible.

Is China’s Digital Coin A Challenge To U.S. Dollar?

Amber: We’re going to make sure we follow that prediction. It’s something to see. I know it can come to fruition. My last question for you today is actually from Twitter. It’s from a Twitter follower named Gary. Hello Gary. Thank you for following us on Twitter.

He posted this question.

Ian: The thing is, a lot of fiat currencies are mostly digital. Over 90% of all dollars are digital. Barely any paper currency exists when you look at the entire amount of fiat in the world. A very small percentage is paper, physical currency.

I think the main thing that separates this from the current financial system is the fact it’s on a blockchain. But still, I don’t think CBDCs are going to have the same impact as BTC because we’re seeing with the whole thing with Ukraine and Russia that decentralization is important.

If you leave your foreign reserve assets in other countries you don’t have good relationships with, it’s not exactly safe. Having a decentralized currency that’s not able to be tampered with by a government is going to be increasingly valuable going forward. It’s going to be seriously considered by a lot of major economies all over the world.

I think it’s going to be the base reserve currency of the digital financial world, which is also developing very quickly right now. As for the digital yuan replacing the dollar, I don’t think that would happen anytime soon. There’s still 40% of all transactions that happened last year with the dollar.

I think the yuan only accounted for 2.7% of all transactions. It would have a ways to go to make up for that. I think the dollar has a sizeable lead on the rest for now. Going forward, it wouldn’t be surprising to me if at least for some of these transactions we started to see BTC make a marginal impact.

Also, start to see that be considered as another reserve asset other than current centralized government fiat currencies.

Amber: Good points there, Ian. I agree about the decentralized currency situation and how it will continue to grow leaps and bounds as we move forward. Ian, thank you so much for joining us today. I appreciate your perspective as always.

Ian: Thanks for having me.

Amber: You’re welcome. See you soon. Have a great day ahead.

Thank you again to Ian for joining us today and sharing his crypto and digital currency perspective. As a reminder, where BTC and cryptos are concerned, our team and especially Ian are bullish. Ian is especially #BOP on his 2022 predictions for crypto.

He believes that BTC will reach $350,000 this year and ETH will reach $20,000. On top of that, his forecast for the total crypto market is $20 trillion. Even with crypto’s volatility, Ian is standing firm on his targets. He’s calling for a prime comeback for the crypto market.

In his strategy for Crypto Flash Trader, Ian aims to identify which cryptos have huge price moves ahead before they happen. All we can say is, don’t let the crypto market intimidate you. Now you can take advantage of the rebound in crypto without having to sift through sounds of cryptos or alt coins.

As Paul says, Ian is the guy you want in your corner when it comes to cryptocurrencies. He can act as your guide. To learn more about Ian’s Crypto Flash Trader service and get started in trading, you can click the strong hands for all those details.

Remember, you can follow Paul, Ian and me on Twitter: @MampillyGuru, @IanDyerGuru and @ALancasterGuru. Thank you so much for tuning in this week. Thanks again to Gary for his question. You can write to us on Twitter any time and post a question or comment.

We will read it. Until next time, take care and have a great week ahead. Bye bye.

Listen to the financial media and they’ll tell you the best times are behind us.

But I’m seeing something different. If you look at what the “King of Crypto” has done over the last two years, it’s very clear to me…

Bitcoin is holding on and won’t let go. 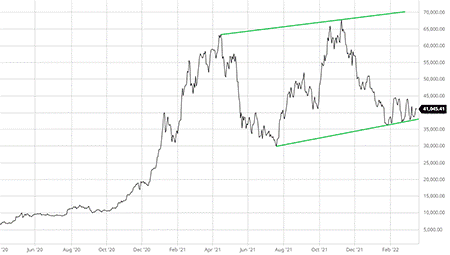 Higher highs and higher lows with clear lines of support?

That’s about as BULLISH as it gets.

That’s why I think we’re in for another rally.

And if the trend continues, it could be a big one like we saw last fall.

Bitcoin alone could double over the next few months.

But there are ways to do much, much better.