Ted Bauman is a former U.N. economist and bestselling financial author. His work has been featured on Fox Business, in Forbes, Barron’s and more.

On February 13, 2020, Bauman issued a public warning that the stock market was headed into dangerous territory … one week before it started dropping faster than any other time on record. 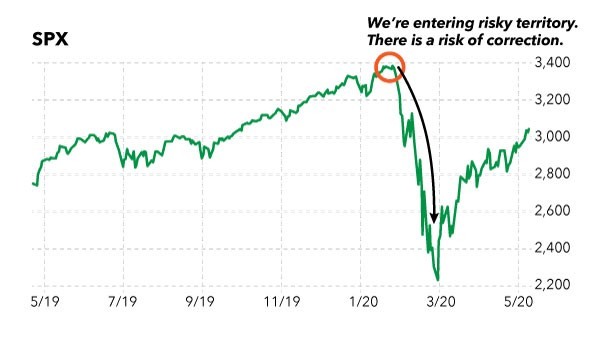 Today he’s making his most controversial prediction in 40 years.

He warns that an unstoppable stock market collapse has already been triggered. In the end, he believes the stock market will tumble by 70%.

And he highlights five financial cracks in particular that could send the economy and stock market into a tailspin.

First, he looks at the single indicator that predicted both the dot-com bust and the 2008 financial crisis.

It compares the total market value of stocks to our entire gross domestic product (GDP).

When it’s over 100%, that means stocks are valued at more than the GDP, and they need to come back down.

It has never, ever been this high in the history of the stock market.

We are in unchartered territory.

According to Bauman: “When I say that the stock market is on the cusp of a collapse, I don’t do so lightly. With every prediction I make, my reputation is on the line. But that’s exactly why I decided to go public with this message. Because should the collapse occur in the next few months, the steps people take today could shield them from the inevitable fallout.”

Ted put together an urgent presentation where he details the other four financial cracks. And more importantly, he reveals how you can learn what he and his family are doing to prepare right now. (It’s unconventional and even controversial, but proven to work.)

You can view it HERE.