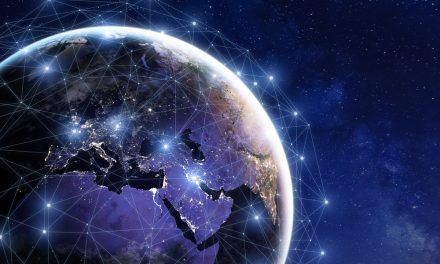 One day in the fall of 2016, I decided on an impulse that I was going on a road trip across the country.

So I mapped out a trip that would take me across a bunch of Northern states, down through Yellowstone National Park and back across the middle of the country, stopping at several national and state parks along the way.

Yes, it was a solo trip. If you think that’s a little crazy, you’re not alone. And I’m OK with that.

Anyway, baseball season had just ended, and I made some extra money from bets I made at the beginning of the season. Perfect for hotel costs!

The easiest way to redeem that money was in bitcoin. So, I began to look online for hotel websites that would accept payment in cryptocurrency.

I couldn’t find any, but I did find the next best thing: A website called Gyft sold Hotels.com gift cards, and it accepted bitcoin.

Just like that, I’d spent crypto for the first time.

Looking back, if I had waited a year, my bitcoin would’ve been worth enough that my road trip could’ve been an international one. But I still had a good time.

Now we’re seeing cryptocurrencies become a part of the digital payments revolution, which has been going on for years.

Only 13% of people in Sweden said they used cash for a recent purchase. And with the internet spreading rapidly in developing countries, we’re going to see this more and more.

In 2018, there were 360 million new internet users around the world. And since 2000, countries such as Vietnam, Nigeria and Bangladesh have seen growth rates in their number of internet users ranging from 31,900% to 91,961%.

Less than 1% of the population in the countries in the chart below had internet access back in 2000. However, the number of people with internet access has grown exponentially. 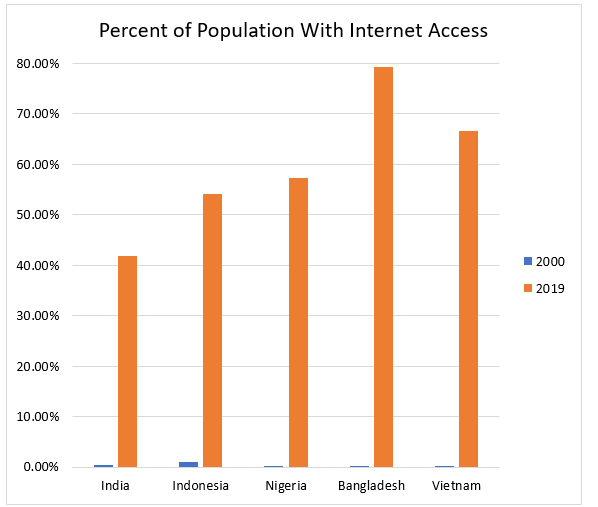 Digital payments and crypto usage in these countries have skyrocketed over the past few years as well.

It’s also important to point out that India, which has almost 20% of the world’s population, still has over 800 million people without internet.

The country’s putting all available resources into creating widespread internet access. That alone creates an enormous growth opportunity for the digital payment industry.

Payment Apps Are a Huge Deal

This trend has resulted in payment apps such as Venmo, which has over 40 million users.

A number that big is a huge deal. That’s millions more accounts than Bank of America and Wells Fargo, two of the biggest banks in the world!

And over the past year, Venmo reported a 73% increase in the amount of money sent between its users.

There’s also Square’s Cash App, which has over 15 million users.

The important difference, though, is that Square allows its users to buy bitcoin. To say the least, this feature has been extremely successful.

From January through March, Square reported that 17,269 bitcoins had been bought through the app. That’s almost twice as much as the three months prior, during which 10,025 bitcoins were bought.

And I’d bet that number has gone far higher since March, as bitcoin has been on a tear.

Venmo and the Cash App are great if you want to send money to someone. But there’s another type of mobile payment system that’s seen massive growth as well.

It’s called near-field communication (NFC) payment, and it’s what you would use to buy something at a store.

Apps that use this type of payment include Apple Pay, Google Pay and Samsung Pay. And the number of people who use these services has more than tripled, from 53.9 million to 166 million, in the past three years.

Square’s move into cryptocurrencies is going to become the new normal.

While it was a risky move for Square, it’s paid off. And we’re already seeing others begin to follow.

For example, you can now use Google Pay and Apple Pay to buy bitcoin through an exchange called Paxful. And Samsung has announced that its payment service is gearing up for crypto capability as well.

Clearly, the most important thing here is whether or not people are going to use crypto as a form of payment.

That’s not to say it won’t have value if adoption doesn’t come right away — there are still plenty of people buying huge amounts to use as a store of value or long-term investment. But it also has the potential to see mainstream adoption through digital payments.

Whether we’ll see that type of adoption anytime soon is still up for debate. But there have been some encouraging signs in the midst of an overall rough crypto market.

Last year, a company called Kaspersky conducted a huge survey spanning 22 countries in an effort to find out how far things such as online shopping and digital payments have spread. In the process, it discovered that about 13% of internet users have paid for something online using some form of cryptocurrency.

That doesn’t sound like a lot. But when you consider that 2018 was a disaster for crypto, it shows that millions of people still accepted it as a viable form of payment.

Cryptocurrencies Are a Real-World Payment System

Another thing to keep in mind is that this was the first real test of whether or not people would actually spend their bitcoin.

Before the huge bull market of 2016 to 2017, bitcoin was mostly seen as a fad, and not that many people owned it.

The number of bitcoin wallets has gone from 6.65 million to 34.66 million since the beginning of 2016. That means there are millions more potential spenders holding it.

There are also thousands more vendors accepting crypto as a payment form than there were in the past. Back in October 2013, there were only 345 such places. But now, that number has grown to about 15,000.

As these “heat maps” show, crypto is now accepted in dozens of countries spanning six continents. 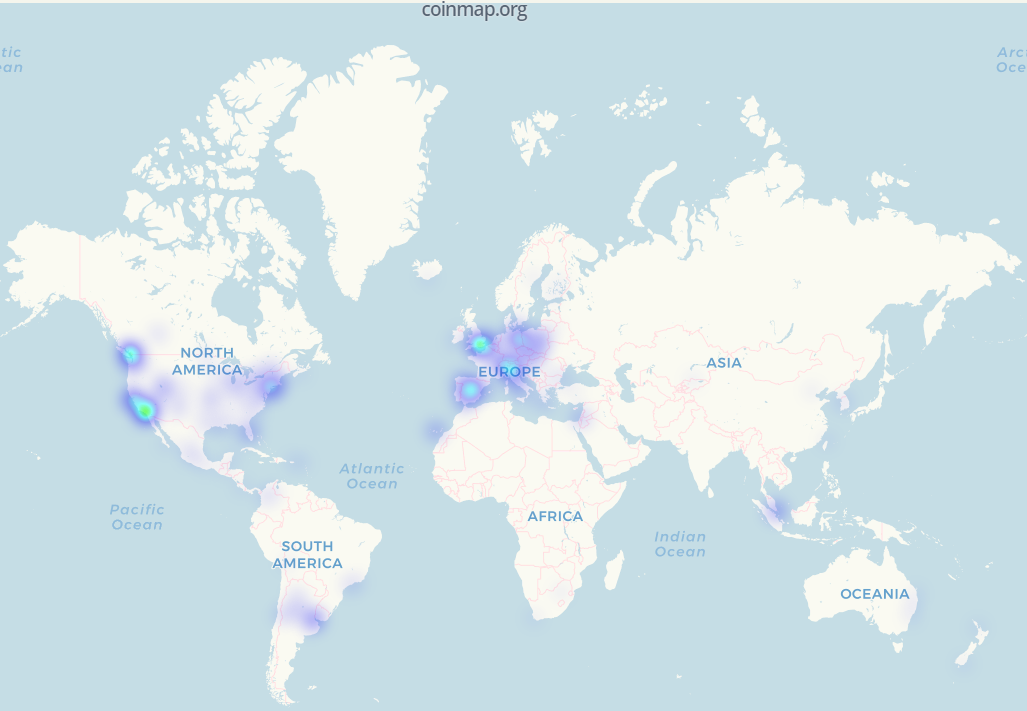 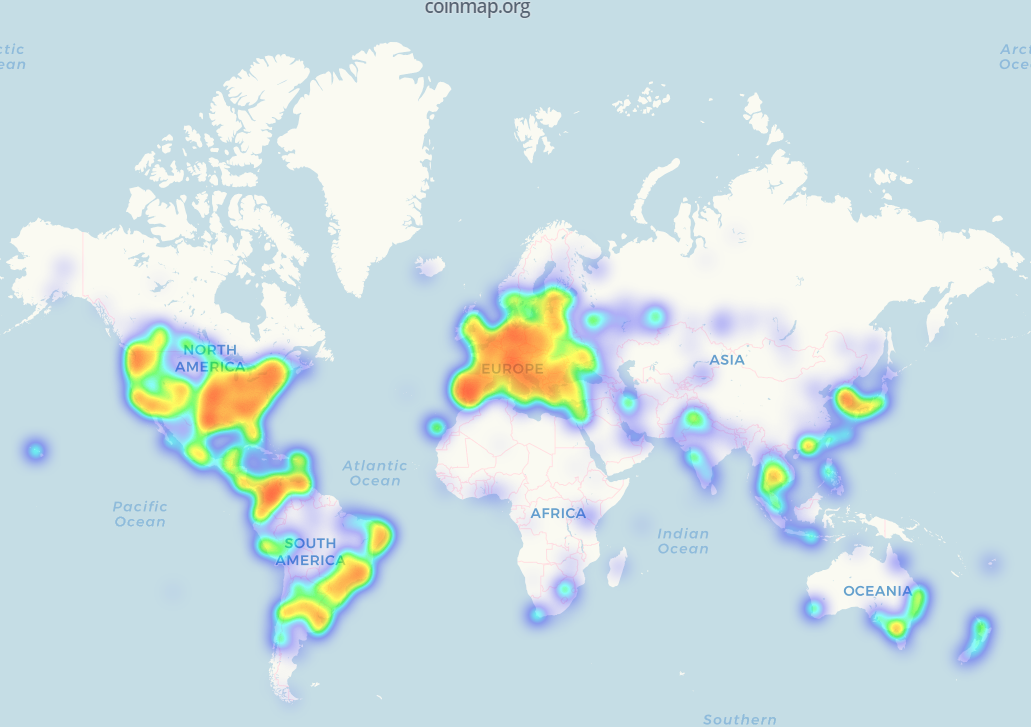 Some major news on this front has come out recently, when huge companies such as Whole Foods, Nordstrom and Starbucks all announced that they now accept crypto.

To me, this signals that it’s beyond the point of being a fad. It has become a real-world payment system, and the biggest growth is still to come. 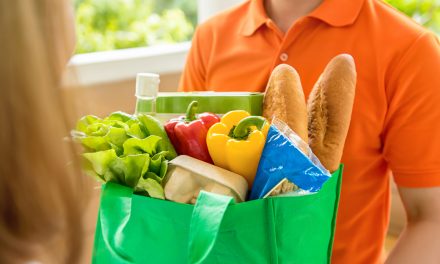 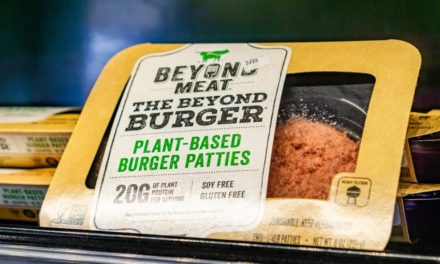