Home » Cryptocurrency » The Crypto Art World Is on Fire 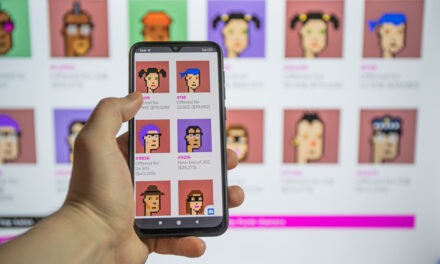 Throughout history, art belonged to the physical world — from the Greek statues to the masterworks of the Renaissance painters to the world of modern conceptual art.

What gives art its value is scarcity. In the physical world, there can only be one unique painting or sculpture.

Tourists can buy a print of the Mona Lisa at the Louvre in Paris, but they’ll never own Leonardo’s masterpiece.

Up until a few years ago, the digital world lacked scarcity.

Anyone could take a digital image, screenshot it and replicate it as many times as they want. It was impossible to prove who owned the original digital image.

But blockchain technology changed all of this. It allows us to encode a digital item with ownership information.

That means art can now move to the digital world, a place where each of us is increasingly spending more and more of our time.

There’s one cryptocurrency platform that’s bringing this digital art to the world and minting millionaires out of up-and-coming digital artists in the process.

And it’s watching the value of its listings skyrocket higher as a wall of crypto money rushes in.

The Rise of NFT Mania

Founded in 2017, OpenSea is the world’s first and largest digital marketplace for crypto collectibles and non-fungible tokens (NFTs).

It allows collectors to buy and sell unique computer-generated images with names like CryptoPunks, Bored Apes and Art Blocks.

The value of these digital images has grown exponentially over the past few years, especially the unique ones.

For example, CryptoPunks are a series of 10,000 computer-generated cartoon images. Each punk has different characteristics, such as skin and hair color, hats or accessories.

And all of them are encoded on the blockchain, where ownership is tracked.

When the project launched in 2017, the punks were free. An owner only needed to pay a small amount of Ethereum to generate an image in a process called minting.

Today, if you want a CryptoPunk, the cheapest one sells for $70,000 on OpenSea, with the platform taking a percentage of every transaction. The average price of the punks available is 66 Ethereum, or $175,000.

Rare CryptoPunks, such as apes or aliens, have recently sold for $2 million to $3 million on OpenSea.

The recent mania propelled trading volume of all NFTs on OpenSea to $171 million last week. That’s a rise of 338% from the same week last month.

Two weeks ago, the company announced it had raised $100 million in financing from a group of investors that includes actor Ashton Kutcher and basketball star, Kevin Durant. This deal valued OpenSea at $1.5 billion.

You might be wondering, why are these digital avatars worth so much?

I believe CryptoPunks will not only maintain their value, they’re likely to go up in price over the next couple of decades.

I also think some of the other blockchain-based collectibles will be worth significantly more in the future as well.

These early collections are historically significant. It’s the first time that digital art has been a unique asset.

And it’s the latest way art has evolved throughout history.

Early works of the Renaissance were the first to use shadows and light to paint a better portrayal of the physical world.

Cubism showed us the world with geometric shapes.

And pop art became the fine art that it ironically mocked.

It’s the idea of something new and different that matters most to art collectors. And that’s what we have here with crypto collectibles on OpenSea.