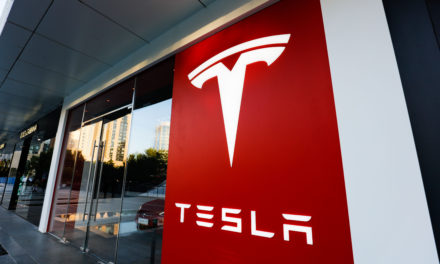 Nobody saw this coming… except us.

Paul and I ignored the naysayers and remained bullish.

We recently made a bold 2020 Tesla prediction. And the stock is already 100% higher.

Watch today’s Iancast to see how our other 2020 predictions are already unfolding like:

Check out today’s Iancast for the full scoop.

And in case you missed it, you can catch up on our 2020 forecast here.

Iancast: 2020 Predictions Already Unfolding – Are You Positioned for Profits? 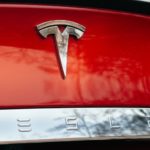 I want to start this week by talking about the China-Tesla Deal and continue what I was saying in my update last week. Tesla is making huge progress in China. They just opened their gigafactory there a couple months ago [1].

After some time making sure all the equipment worked right, testing their manufacturing process and general regulatory housekeeping, the Tesla china gigafactory is now making 1,000 cars a week. It’s very impressive considering it just opened a couple months ago.

Cars are expected to start shipping customers by January 7th. Tesla’s stock is still on fire. Stock prices reached $430 yesterday after being down around $180 in May and June. This China-Tesla Deal is going to go down in the companies history and here we are seven months later and very few people saw this coming.

Paul and I were very bullish the whole time on Tesla, but the attitude back then was very bearish. Now, here we are seven months later and the stock is more than 100% more than it was. We are still very bullish on Tesla. They are making huge progress. The Model Y is being made ahead of schedule. With the current China-Tesla Deal and this model Y news, you can bet that the future for Tesla is looking bright. 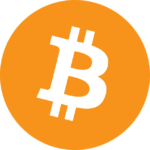 Not much news has come out about Bitcoin other than in 2020 we believe that Bitcoin is going to have a great year with the Halvening coming up in May. That will drop the supply of bitcoin, as we’ve touched on many times over the past couple of months.

The supply on the other hand is going down, which is a recipe for the price to go up. The future of Bitcoin is looking bright. Even though it’s been flat for a while, we believe Bitcoin is going to do very well long term.

2019 was such a roller coaster for the marijuana industry. Stocks prices were flat in January. Then they went up a little more in February and March. A lot of them peaked in March and April. Then they basically went down in a straight line for the last eight or nine months of the year.

There is so much pessimism baked into pot stocks, contrary to how much positivity surrounded the marijuana market just a few years ago. But now, it’s the opposite. Nobody is in pot stocks.

That’s a recipe for a lot of money to come back in and push the prices back up. It’s not going to take a lot for that to happen because any kind of demand at all would do that. The demand will come in once these companies have shown that all the rumors are not true. I’m going to show you a chart of the negativity.

The image below perfectly illustrates the current negativity towards pot stocks. The sales estimates for these companies has decreased. The average sales estimates have decreased by more than 30% since March. It’s not going to take a lot to beat that. 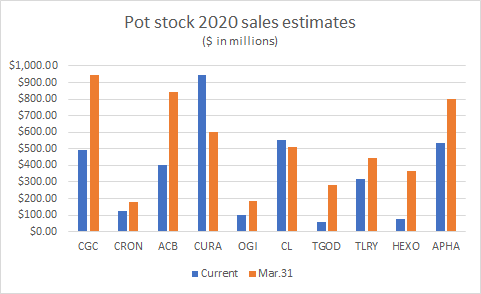 This huge report just came out that said global marijuana sales are set to go up 853% from 2018 to 2024, reaching a point of $103.9 billion worth of sales around the world in 2024 [2]. And that’s just the beginning. Marijuana, in general, is starting to disrupt what we call the old vice economy — tobacco and alcohol — creating what we call the new vice economy, which is marijuana. 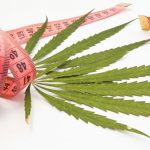 We’re seeing huge disruption already. In the United States, tobacco and alcohol combined are already a $2 trillion market. There’s a lot of room for marijuana to disrupt and a lot of room for these stocks to grow.

We expect that these forecast cuts are overblown. The sales are going to blow right by them and the stocks are going to rebound. It’s not going to take a lot at this point to bring demand back into these pot stocks. As I’ve said before, ETFMG Alternative Harvest (NYSEArca: MJ), which is the marijuana ETF, I believe is going to double this year.

2020 is going to be a really strong year for marijuana stocks in general. Over the past couple of years, these companies have gone from barely any sales at all to being valued at billions and billions of dollars and they are making hundreds of millions in sales per year.

That’s a very fast-growing industry, yet the stocks have completely crashed. We expect that to rebound this year and going forward into the future.

[1] TechCrunch – Made in China: Tesla Model 3 deliveries to Chinese customers to begin January 7 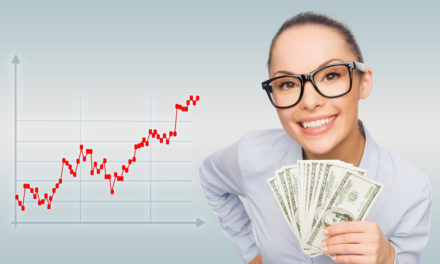 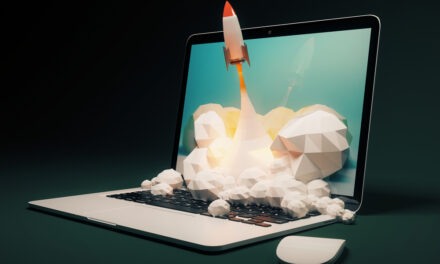