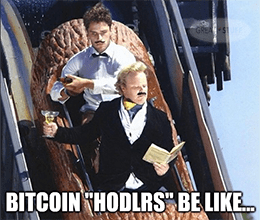 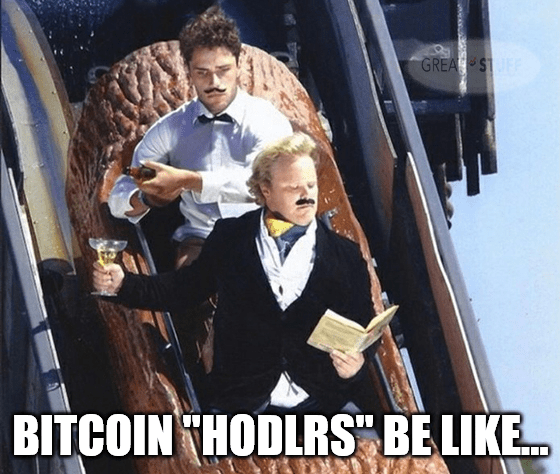 Don’t get me wrong: I like Bitcoin and cryptocurrencies. But it seems like that’s all I’m talking about lately. In hindsight, I guess that should’ve been a hint…

In the past week, the hype surrounding all cryptos came to a thunderhead. Fresh off all-time highs, bitcoin, Ethereum (ETH) and even Dogecoin (DOGE) all collapsed. I mean, they tanked hard:

You’ll all have the opportunity to sound off on your own crypto pain in today’s Poll of the Week. But if a poll isn’t enough, feel free to write in to GreatStuffToday@BanyanHill.com and tell me more.

I know that with pain comes the need for answers. And I wish I had solid answers to give you, Great Ones. But after scouring the financial webs for concrete analysis, I’m left with only one real reason: Cryptos were in a bubble.

Now, we can blame the Fed for easy money. We can blame the flatlining market for pushing investors into cryptos in search of higher returns. But for me, personally … I blame Elon Musk.

True, the Tesla CEO isn’t responsible for all of the hype surrounding crypto — that bonfire was already burning. But there’s no denying Musk threw gasoline on the inferno with his frequent tweets on the topic. He has repeatedly tweeted very bullishly on both bitcoin and dogecoin — backing both with tweets about going “to the moon.”

The beginning of the current crypto crash has to be Musk’s Saturday Night Live appearance. That moment was the pinnacle of crypto hype, and investors took profits. But the real nail in the coffin was yet to come…

This weekend, Musk proved that he often tweets before he thinks. Elon tweeted out he was concerned about the “rapidly increasing use of fossil fuels for Bitcoin mining and transactions.”

Umm … didn’t we all already know about this? Bitcoin is a digital currency. It takes a fair amount of power to mine and process transactions.

The point is: Elon Musk is a major social media influencer with more than 55 million followers on Twitter alone. When Musk tweets, retail investors listen and act accordingly. It reminds me of the ol’ Great Stuff Trade War Cycle chart I had almost two years ago, which tracked the impact of former President Trump’s tweets on the market.

If you truly believe in the value of cryptocurrencies, in bitcoin … in *gasp* Dogecoin … you want to hold. If the market has taught us anything, it’s that this sell-off will pass. Longtime crypto “hodlers” know how this goes. They’ve been there before, and they’ve been rewarded for sticking it out.

But if you don’t already own any crypto, now’s the perfect time to buy in. Remember, one of Warren Buffett’s favorite axioms is “the time to buy is when there’s blood in the streets.” And I’m sure we can all agree that the crypto streets are pretty bloody right now.

If your portfolio is taking a big hit, you’re not alone. But it’s not time to panic … it’s time to prepare. As Banyan Hill’s Ted Bauman says: “If you are on the right side of what’s ahead, you could seize opportunities that come along once, maybe twice, in a lifetime.”

What’s with all the quotes, dude? Is this your book of proverbs?

Hush now. Just let it happen. Perhaps most importantly, in this new video presentation, Ted reveals how you can learn what he and his family are doing to prepare right now. Click here to learn more.

Good: Our House, In The Middle Of Wall Street 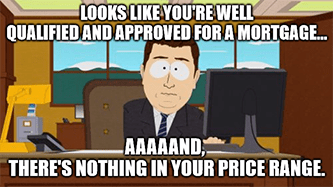 But this triple-beat wasn’t enough to outweigh housing market concerns. As I noted yesterday, rising home prices are pushing many would-be buyers out of the market. What’s more, we just found out this morning that mortgage applications for new homes fell 4% last week, according to the Mortgage Bankers Association.

While the data shows that homebuyers are taking out increasingly larger mortgages — the average hit $411,400 last week, which could buy you a sizeable McMansion in Kentucky — the pace of those taking out new mortgages has slowed considerably.

I have to think that this double whammy of housing news is the lodestone around Lowe’s neck today. Investors know the slowdown is coming and are starting to price it into home improvement retailers. 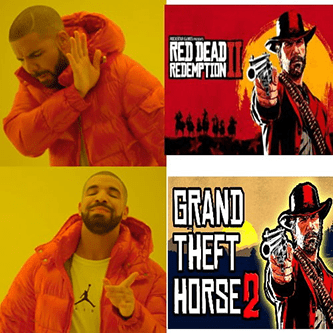 It takes two to make a quarter go right … but Take-Two (Nasdaq: TTWO) can make it outta sight.

The video game maker and Rockstar Games parent obliterated Wall Street’s expectations across the board. Per-share earnings came in at a healthy $1.40 and slayed expectations for just $0.67 per share.

Gross bookings shot up to $784.5 million and also handily beat estimates for $664 million.

However, just like every other digital company that took off during the pandemic, Take-Two is cautious about future revenue as more places reopen and people step away from their magic glowing game screens.

In fact, the company put current-quarter projections right in the middle of analysts’ estimates.

I’m not sold on it myself, but I’m told that this “socializing” and “chilling outside” stuff is taking off. I’ll still bet that we’ve picked up some new gaming addicts along the way during the pandemic, which would play right into Take-Two’s hands.

And like everyone else venturing back into the brave new world after the pandemic, Take-Two plans on making this next year an “investment year.” The company’s report noted it just hired 700 new software devs and plans to launch two new game franchises. In other words: “Guess we gotta make stuff now…”

Personally, I hope Take-Two does a little more than just figure out new ways to scrounge cash out of Grand Theft Auto V for the ninth year running.

Unfortunately, Take-Two has also followed the Electronic Arts and Activision Blizzard model of making a highly successful game that everyone loves … and then milking that cash cow dry as a bone. Think of a myriad of microtransactions, loot crates and whatever other virtual nonsense you could offload onto any gamer willing to part with $0.99 … repeatedly.

And just like I told you with Activision, what’s bad for gamers is typically great for investors, so … win some, lose some, I guess. This should set up Take-Two for tremendous growth going forward, however, and TTWO is up about 5% today even amid the broader bloodshed.

What do you think? Did you or someone you know develop a video game addiction over quarantine? Or are y’all more into that “go outside” thing? Let me know in the inbox — I’d love to hear from every single one of you. 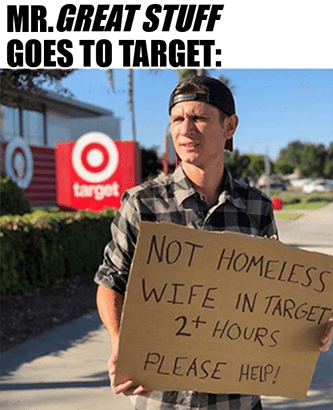 Yesterday, Walmart (NYSE: WMT) let rip its boomstick and leveled the Street’s expectations — even a retail king has to flex the muscles every now and then.

Earnings grew sevenfold year over year to $3.69 and destroyed estimates for $2.25 per share. Target’s revenue reached $24.20 billion and came in well above analysts’ targets *slight chuckle* for $21.81 billion.

Granted, anything looks ridiculously successful compared to this time last year. But I know Target’s time in the retail spotlight ain’t over yet.

Honestly, the chain is just Walmart for people who don’t like Walmart. (Pick your reason … there’s enough of them.) It’s not just a shtick, it’s a proven strategy. And more people getting out and resuming life means more shoppers at Target … unfortunately. Just when I was getting used to those wide-open lanes, too. Guess I’m shopping at 7 a.m. again.

Anyway, as long as the pandemic lockdowns don’t return, Target will clean house as it always does — by being “not Walmart.” (Sorry, Walmart shoppers.)

And hey, if lockdowns do return — perish the thought, cross your fingers, knock on wood — Target’s due for another prepper-propelled hoard-a-thon. Win-win for the bullseye.

And the small North American company at the center of it all is yet to hit the headlines.

Don’t miss the boat on this opportunity. Find out what’s going on now — click here!

Welcome to poll day, Great Ones! The day when you can share your take on the latest hot-button topics and make sure your voice is heard among the masses.

I mean, you can do that any day if you drop us a line in the inbox: GreatStuffToday@BanyanHill.com. If you’ve got a rant you’re desperate to blast out into the ether, I want to hear it. Who knows? Your email might just land in tomorrow’s edition of Reader Feedback.

Anyway, in last week’s poll, we wanted to stick a feeler out and gauge your feelings on this whole “inflation” hubbub. About 42% of you said you’re standing fearless and laughing right in inflation’s face! (I don’t know if inflation has a face … just go with it.)

The other 58% of you still fear the inflation reaper, and y’all should vent to me about what you’re thinking. Now, I hate to keep on the same old negativity shtick — what am I saying, of course I do — but we’ve gotta catch up on the crypto calamity.

Take a second to click below and let me know:

Remember, if you’re ready to ramble up a storm, drop me a line right here. I’d love to hear from you! In the meantime, here’s where you can find our other junk — erm, I mean where you can check out some more Greatness: 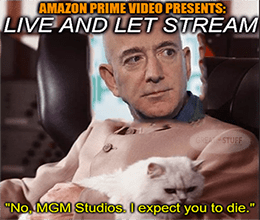 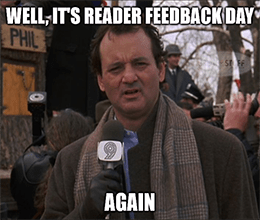