Home » Investment Opportunities » Bitcoin Blockchain: Not a Bull? You Will Be…

Bitcoin Blockchain: Not a Bull? You Will Be… 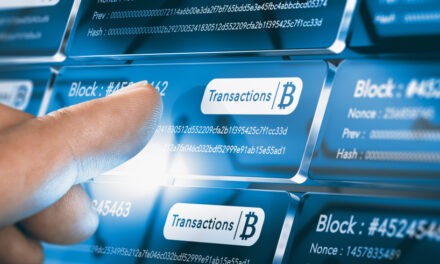 The growing crypto-economy “could create more jobs than the Internet did.”

Our Bold Profits crypto bull Ian Dyer and Coinbase co-founder Fred Ehrsam agree that crypto will have a tremendous impact on our workforce.

As Ian sees it, the evolution of cryptocurrencies is on a tear and just getting started.

So, for this week, I want us to take a step back and look at the big picture.

Even if you’re not all-in on crypto, the technology behind it will affect us all one day. It’s also an incredible investment opportunity.

You’ve heard me talk about it before. Blockchain.

Blockchain is like a secure digital ledger. It’ll make everything more efficient — medical records, voting, marriage licensing and even ATMs.

But nothing more so than bitcoin.

I’ll tell you how this blockchain/bitcoin mashup is just the ticket for America 2.0 profits. And if you’re not quite ready to buy crypto, I have a new ETF to watch that could still give you the same great exposure.

Bitcoin first came around in 2008 by an unknown individual or group identified as Satoshi Nakamoto.

The crypto is a semi-anonymous, decentralized digital currency based on blockchain technology. It was first used in 2009.

Bitcoin has no central bank nor single administrator.

It’s described as a peer-to-peer electronic cash system and signifies one of the world’s biggest developments in financial technology a.k.a fintech.

Simply put, it allows people to send money to each other quickly, cheaply and without employing a middleman. It can also be quite profitable.

And profitable is what we believe! Ian’s bitcoin prediction is $115K by August. That’s a 238% rise from today. But we’re holding Strong Hands and standing behind his #BOP call!

Bitcoin isn’t like any other currency. It can’t just be printed and there’s a limited number of it creating natural Scarcity (one of Paul’s criteria for his GoingUpness strategy.)

It’s not even mined from the earth like gold. 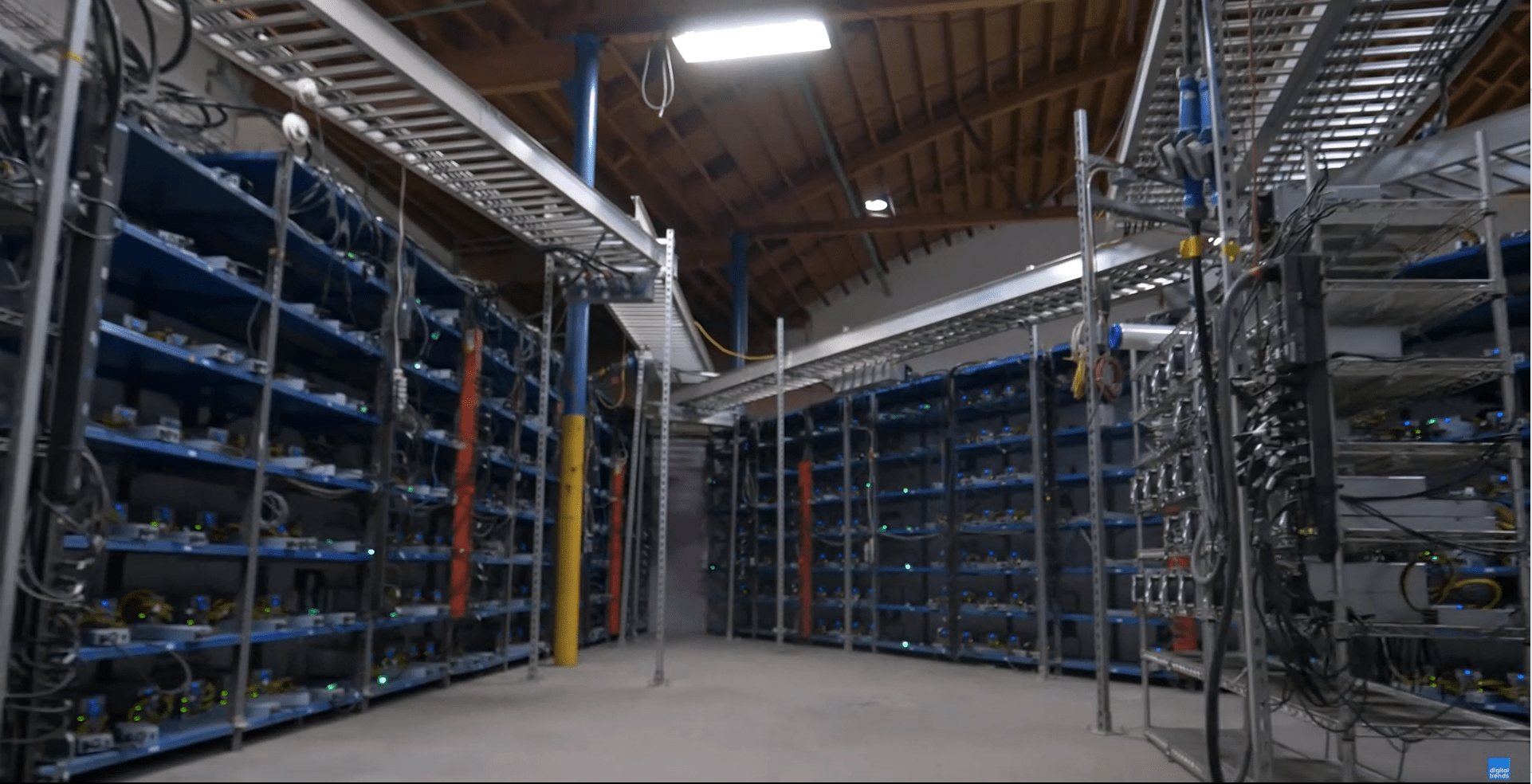 These thermally-regulated facilities mine from hundreds of bitcoin mining computers running simultaneously that use hardware servers like Application-Specific Integrated Circuits, or ASICs. 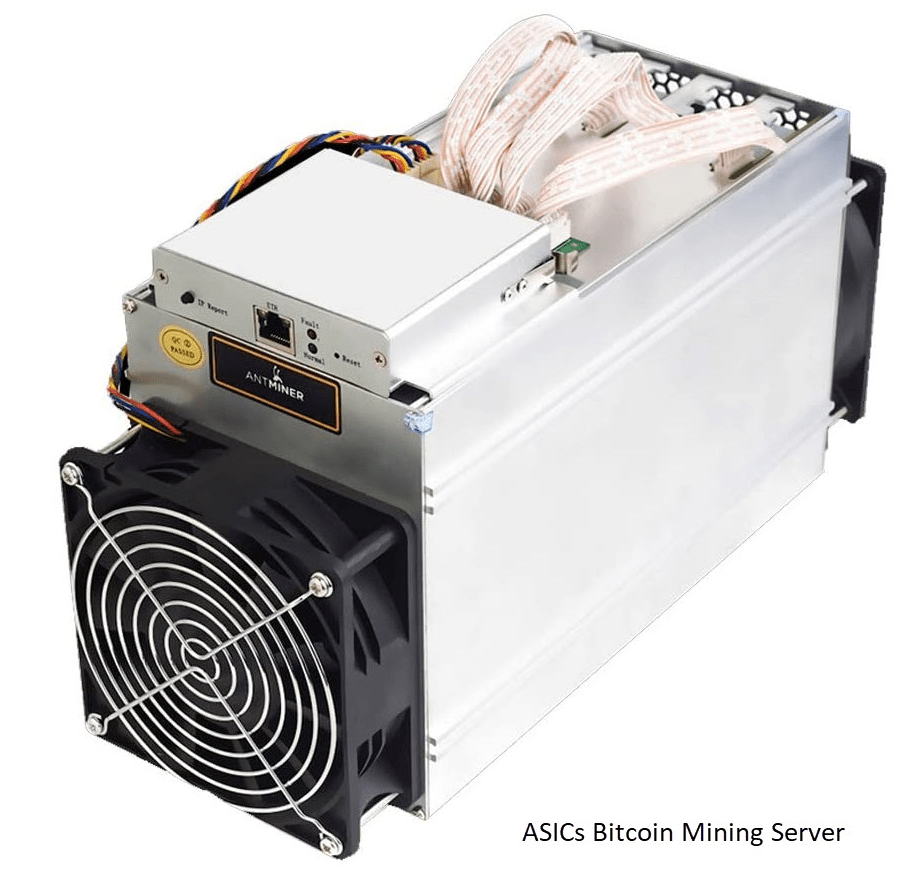 Miners create bitcoin by using computers to solve complex mathematical problems. Solving these math problems is the process of verifying the legitimacy of bitcoin transactions.

Once a miner has verified 1-megabyte worth of bitcoin transactions, known as a “block,” these blocks are added to the blockchain or public ledger. 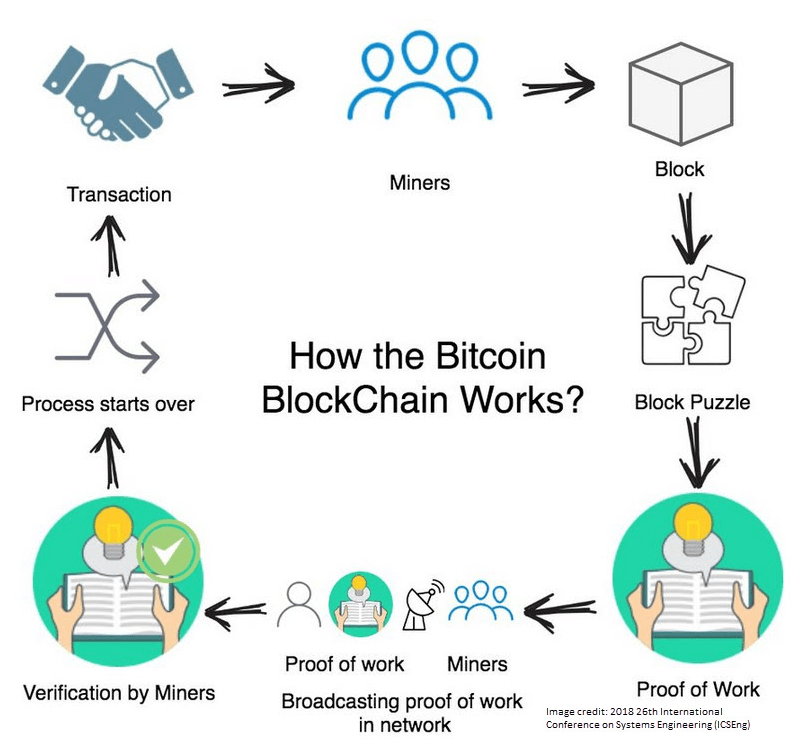 As a reward for completing and verifying a block of bitcoin transactions, the miner receives bitcoin as payment.

The amount of bitcoin that can be mined is finite. (Remember … Scarcity).

The exact amount is 21 million bitcoins.

Once 21 million bitcoins are minted, no new bitcoins will enter into circulation. The year this is expected to happen is 2140. 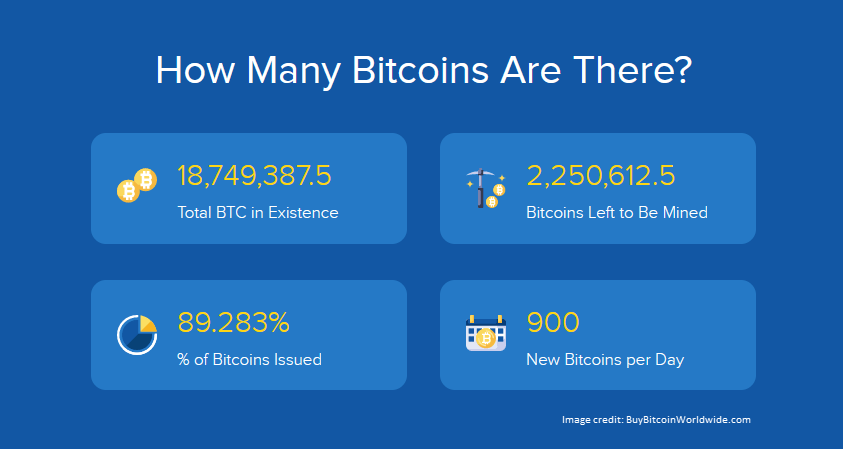 It will take another 119 years before the last bitcoin ever is mined.

Why? Well, it’s all about the halving process which takes place about every four years.

In return for discovering a block, bitcoin miners receive a fixed bitcoin block reward. When bitcoin first launched, the reward was set at 50 BTC — but it halves periodically, after 210K new blocks have been discovered. That happens roughly every four years, reducing the reward to 25 BTC, 12.5 BTC, 6.25 BTC and so on.

Three halvings have been completed so far; the most recent bitcoin halving occurred in May 2020, cutting the block reward to 6.25 BTC. The next halving is expected to occur in 2024. 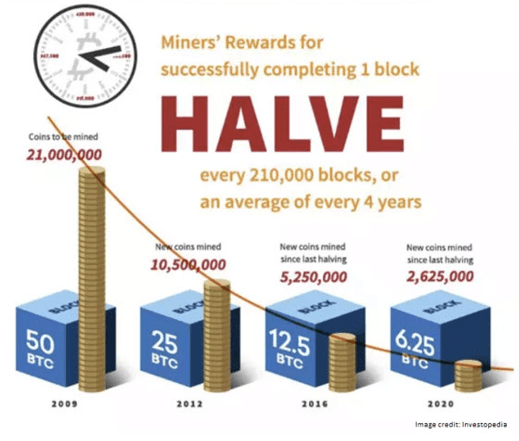 Now this is where the gains can be made!

If a shoe store has a million pairs of the purple sneakers you want, you’re not going to pay a higher price for them. You’ll just go to the next store that has the same pair.

But if there was only ONE pair left, you’d pay whatever it took to get those sneakers!

That’s the rule of supply and demand. And that’s what bitcoin has going for it.

Per Bloomberg analysis, this diminishing bitcoin supply is set to boost the price of bitcoin. 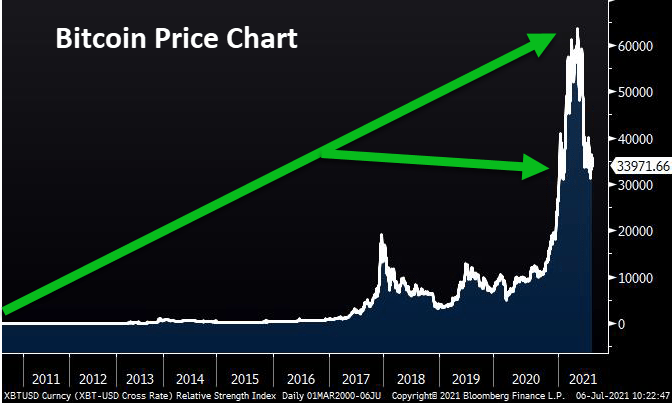 “If previous patterns repeat, in the years following a halving of annual supply, bitcoin has added at least a zero to its price.”

With the declining supply and rising bitcoin price, the crypto could be well on its way to Ian’s $115K prediction!

This goes hand and hand with bitcoin’s maturation and increasing mainstream adoption as a digital gold investment.

Be a Bitcoin Bull to Capture the BIG Gains

Now, in Market Talk this week, I showed you a poll we took earlier this year. More than 75% of you were ready for crypto.

And I challenged the remaining 25% to come aboard!

I’ve got your back either way. 😊

There’s an exchange-traded fund (ETF) coming that could give you excellent exposure to blockchain technology, bitcoin and crypto without actually buying bitcoin.

For the already bitcoin bulls, it could even potentially give bitcoin’s price a nice boost!

I’m talking about Cathie Wood’s Ark Invest bitcoin ETF that will likely soon hit the open market. Trading under the ticker ARKB, this ETF will track the performance of bitcoin, according to the Fund’s Securities and Exchange Commission filing.

Bitcoin focused ETFs like the upcoming ARKB show there’s a growing interest in this cryptocurrency investment theme for the masses. This type of ETF is highly likely to increase demand for bitcoin and thus its future price.

So, what does this mean for you, Bold Profits Nation?

Well, demand for bitcoin has legs!

Now, for you Super Bulls…

Ian’s $115K by August prediction is small potatoes for where he sees it going. In the overall bull cycle, he’s calling bitcoin $350,000!

He’s so bullish on the future of the cryptocurrency market that he’ll be launching a first-of-its-kind special event TODAY at 4 p.m. ET.

It’s not too late to save your seat. Just click here. 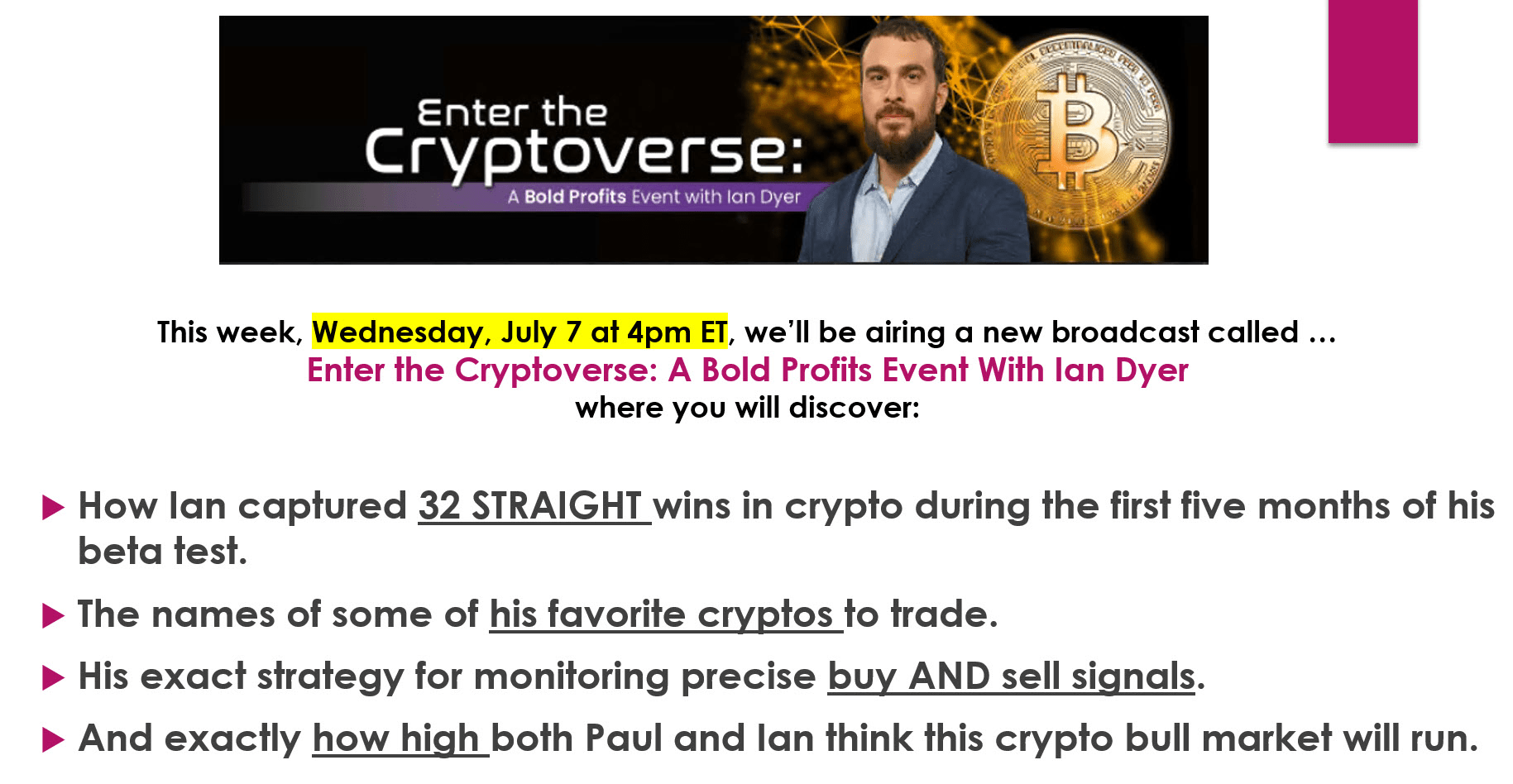 If I didn’t make a believer out of you today, I bet Ian will. This is a free event for Bold Profits Daily subscribers.

Watch it and then let me know if we’ve converted you into a Bold Profits bitcoin bull! You can leave a comment at the bottom of today’s web post! 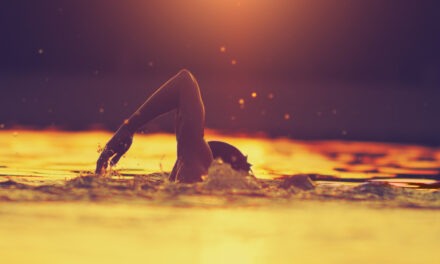 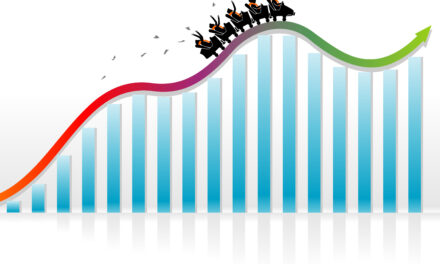