Home » True Options Masters » Are You Confusing RSI and RS? You’re Not Alone…

Are You Confusing RSI and RS? You’re Not Alone… 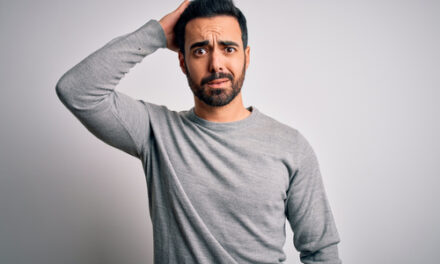 One of the most popular technical indicators is the Relative Strength Index (RSI), even though few traders understand its origins.J. Welles Wilder introduced the idea in 1978, in a book called New Concepts in Technical Trading Systems.The book was an astonishing accomplishment for its time. It provided formulas and templates for many of the popular indicators still used today.Though, I do have a major concern with Wilder’s work… Namely, the fact that he called his creation RSI.The RSI is a short-term indicator that has nothing to do with the larger concept of relative strength. In fact, the two are often in conflict with one another.I believe this has led to decades of confusion about what these two metrics mean. My editor even came across this confusion while preparing Tuesday’s issue, where I announced the two new ETFs to hold in December. Today, I want to show you the key differences between these two indicators. This is critical to know, as relative strength informs a lot of my trading strategies — including the brand-new ETF trading strategy we’re launching in the coming months.

Relative strength (RS) has truly withstood the test of time.The earliest article on the concept appeared in 1933, almost 90 years ago. The author advocated buying the strongest stocks — defined as those that are leading the market.That’s the way RS has always been used by investment professionals. The strength of one stock compared to other stocks.That makes sense, because professionals try to beat the market. They can only do that if they own stocks that deliver better-than-average gains. RS shows which stocks are likely to do that.It does that by isolating relative performance and reduces the impact of the stock market. Calculating RS requires access to data on all stocks and the ability to define and rank the performance of each one. This is much different than RSI, which looks only at the price action of an individual stock.In addition to being calculated differently, the use of the two indicators is different.Traders using the RSI are essentially looking to buy the dips when an asset is oversold. They believe the RSI oscillates back and forth from one extreme to the other. Buying stocks when the RSI is low should allow them to sell at a profit later when the RSI is high.It’s a nice theory… but there are several problems with it.For one, there’s no reason the price needs to rise significantly for RSI to increase. RSI could actually increase if a stock falls at a slow enough pace, or vice versa.There’s also no reason that RSI will always give trade signals. The RSI rarely reaches extreme values and there is no guarantee a sell signal will follow a buy signal.RS, on the other hand, is a tool for traders looking to buy high and sell higher — a very useful strategy in bull markets. RS traders believe the trend is your friend. This is a theory that makes sense.

Let’s use a hypothetical example. There are three stocks you can buy. One is up 20% in the past year; one is up 1%; and one is down 20%. That’s all the information you have. You must buy one of them.Which would you choose?Many traders pick the stock that’s down. They argue it’s due for a rally. They might be right… Or the stock could be headed to zero as the company goes bankrupt.Most traders rightfully avoid the stock up 1%. They understand there is no interest in the stock, and it takes buyers to push prices up.Some traders will buy the stock that’s up 20%. They understand the move was caused by buyers taking positions. These buyers must believe the stock has the potential for additional gains. Rather than taking a risk on the other two stocks, they buy this one.In this scenario, the stock with the large gain has the highest relative strength. It’s relatively stronger than the other two. Buying stocks with high relative strength means taking positions alongside the large investors who pushed the price up as they bought.RS strategies often buy stocks at or near new 52-week highs. This sounds risky to some traders who have become enamored with mean-reversion strategies.But when a stock reaches new 52-week highs, it’s simply an indicator of a strong trend, and it’s a buy signal for traders using RS.This contrasts with RSI strategies that would look for a decline after a new high. These traders are expecting reversals after every price move, and markets often continue their trend or develop a trading range rather than reverse.This makes RSI a risky indicator to trade on its own, and shows the key difference between RS and RSI.I’ve followed markets for decades, and I know trends continue longer than expected. That’s why I use RS.It operates on the latent truth in any bull market — the stocks that outperform, will continue to outperform. And following RS is key to beating the market yourself.Regards, 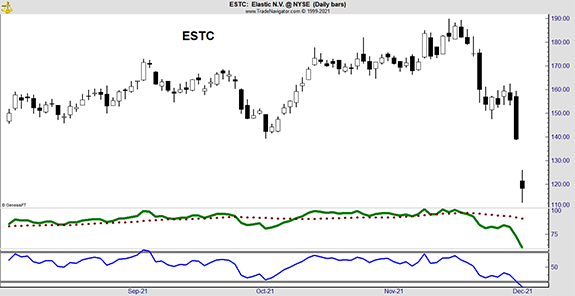 Your editor Mike Merson is out of the office today. For whatever reason, he’s decided to jump out of a plane.But I know our True Options Masters would be devastated to close out the week without a daily chart. So I’ll do a quick one to tide you over.This is a chart of one of yesterday’s biggest losers. Elastic (ESTC) fell 15% on Thursday and is down almost 25% this week.RSI, shown at the bottom of the chart, gave a sell signal after yesterday’s plunge. Relative strength, in the middle of the chart, gave its sell signal near the high when the solid line fell below the dashed line.That’s all for today. We’ll have more on relative strength in the coming weeks.— Mike Carr 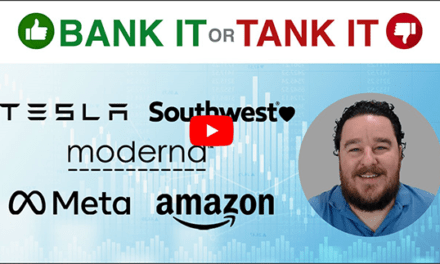