5 Signs Pointing to a V-Rocket Recovery 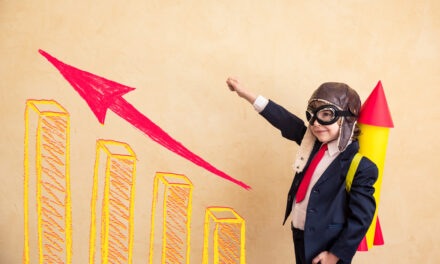 There’s a chance today’s Market Talk might blow your mind.

Right now, the market’s shaping up for a “V-ROCKET” recovery!

Investors who are stuck in the past will be shocked at what’s coming. But we see it all too clearly.

You see, there’s not just one factor — like the drastic descent of the weekly jobless claims — there are FIVE major happenings that point to a massive stock market rebound.

These five factors show that America 2.0 investors are in the best position to ride this rocket recovery to new highs.

But I know you don’t want to stop there. So, I’m also going to share another secret for investing in today’s market. I consider it the No. 1 way to make extreme fortunes in the V-recovery.

Check out this week’s Market Talk for the full scoop below:

Most economists are expecting the next monthly round of U.S. unemployment rate releases to top at least 20%. It’s a direct reflection of the overall economy shutdown to help flatten the virus curve and save lives.

They project this rate will eventually peak and then get better. Last week we saw not one, not two, but five glimmers of hope in the overall economic data. First, is the weekly initial jobless claims data. For the fifth week in a row, the U.S. saw a reduction in filings for unemployment benefits. 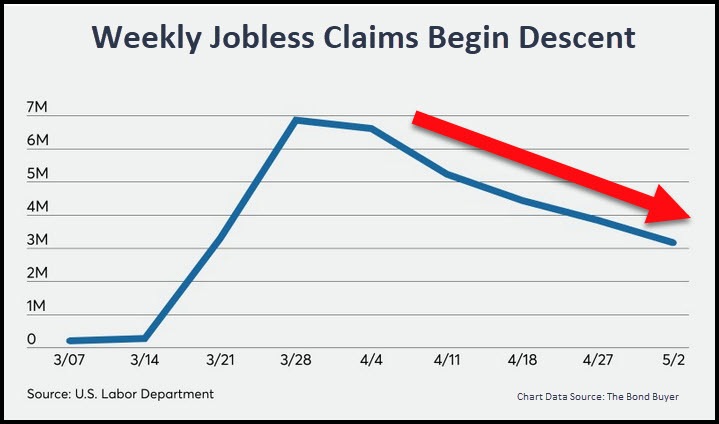 In all, weekly jobless claims rose by 3.17 million, down from 3.8 million the week prior. Bloomberg reports “as some states move toward reopening, further declines can be expected in the weeks ahead. A turn lower in continuing claims could provide a clearer signal that the economy has reached a bottom as it would indicate a rehiring of the temporarily unemployed.”

This means, per Bloomberg, “about 18 million Americans on temporary layoff have the potential of returning to the workforce more quickly provided that their former employers bring them back as the economy reopens.” 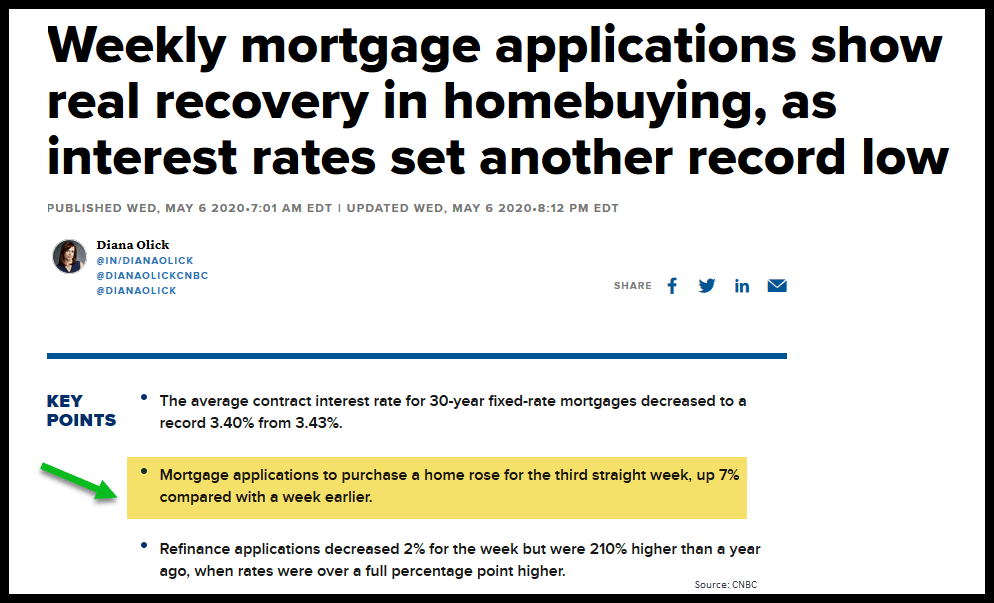 Another bright spot was seen in the weekly MBA mortgage applications. Last Wednesday, within the number released, data is showing that a market rebound is happening in home buying. Mortgage applications to buy a home increased for the third consecutive week. It’s up 7% from the week prior. 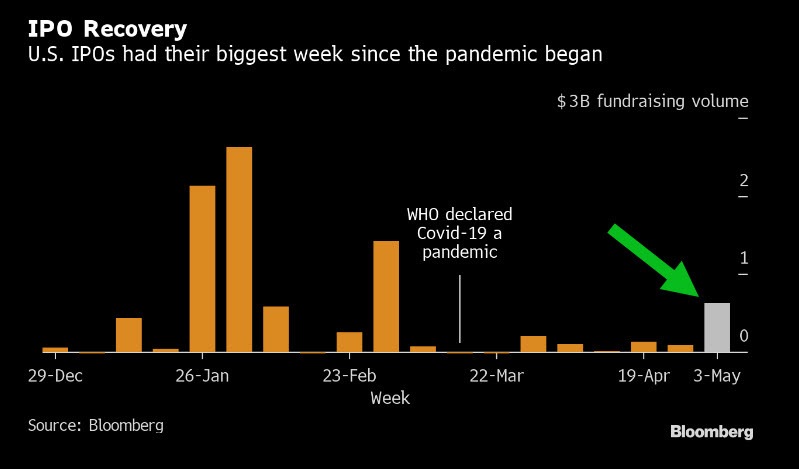 The fourth glimmer of hope comes from the IPO market. Per Bloomberg, “U.S. initial public offerings had their biggest week since the pandemic began in mid-March, ending a drought in the market that’s sensitive to volatility, including special purpose acquisition companies also known as SPACs which are blank-check firms. U.S. IPOs have raised more than $18 billion this year.”

The fifth hopeful stat is the S&P technology sector. A sector we pay very close attention to at Bold Profits. The S&P tech sector is expected to see earnings recoup all the lost earnings by the end of this year per a recent Baycrest Partners analysis. 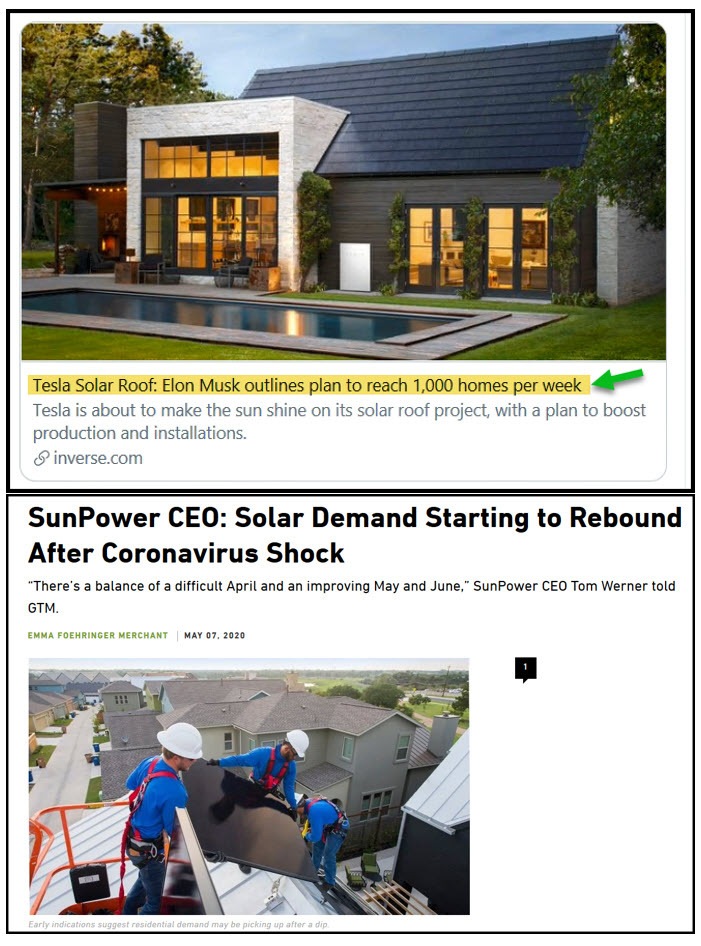 Tesla’s solar panel roofs recently made headlines. Elon Musk stated that the company plans to reach 1,000 home installations per week within the next year. Moreover, the CEO of SunPower, another solar company, announced solar demand is starting to rebound after the virus shock.

Digital brokerages Redfin and Zillow are jumping back into the new high-tech world of house flipping through their iBuying program. iBuying means they make fast offers to home sellers and upon the home seller’s acceptance of the offer, Zillow would buy the home, make light repairs and resell it.

During the pandemic, both companies are seeing an increase in web traffic from house hunters scouring the databases for homes to buy because, no matter what, we are still in the midst of an historic housing shortage.

Homebuying has also moved into a different era. Clearly, many people who are looking to buy a house no longer have to go to the house to decide if they want to buy it. They are using all kinds of electronic mechanisms.

Everything from virtual reality to electronic closings, to virtual showings. Real estate buying has gone virtual. There is still an extraordinary level of demand out there. That underpins everything going on in our economy. This is why I believe the stock market is facing a V-recovery. 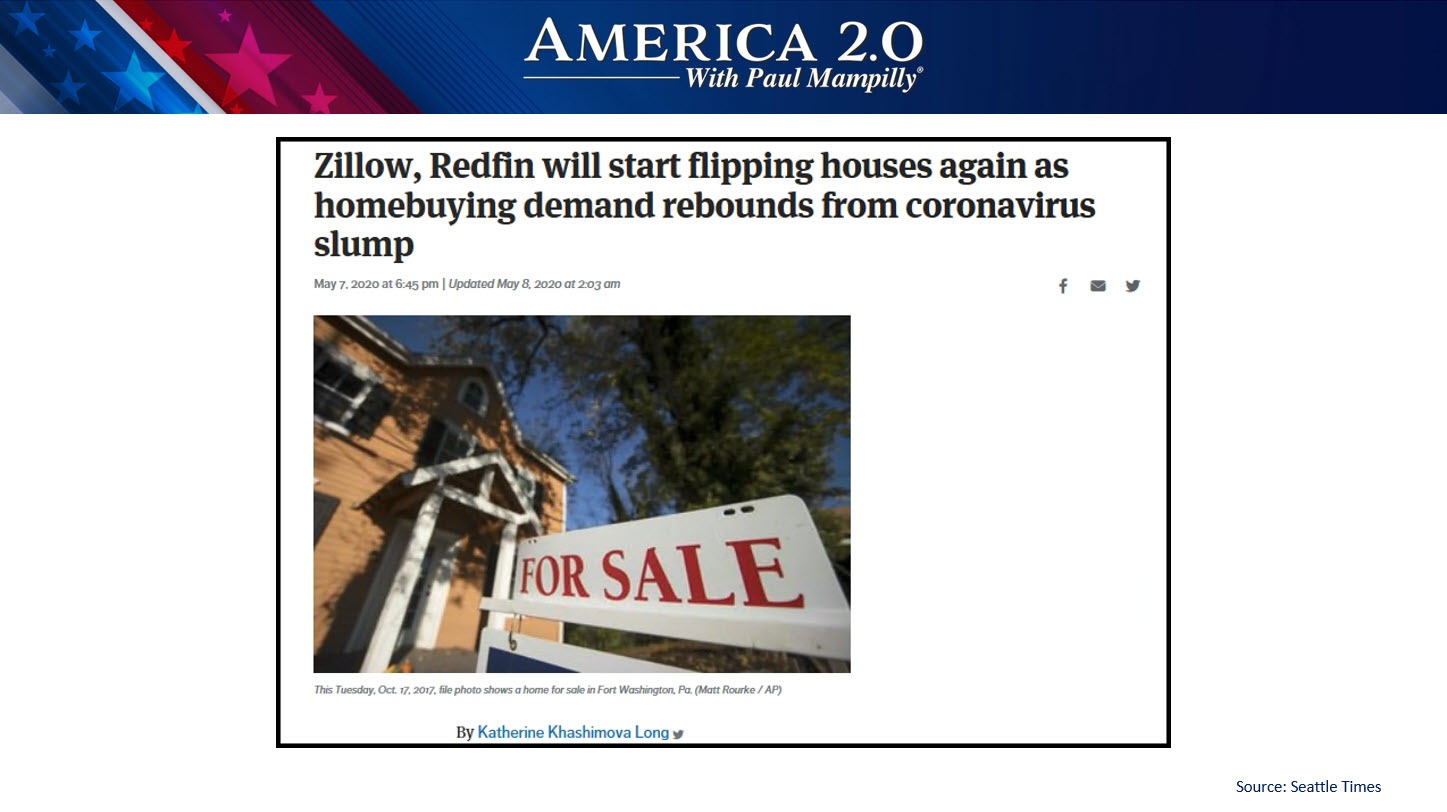 In other words, we are going to come out of this, and economic growth is going to be greater than before we went into this. There is so much pent-up spending that is now building up. Once people move into their homes, you are going to see an unbelievable amount of spending pushed through our economy.

It’s going to drive production figures higher, capacity utilization higher and consumption higher. It is going to shock so many people who are focused on the past, looking backwards instead of looking forward.

The number one way to really participate in this V-rocket recovery is to buy the stocks of the companies today that are going up the fastest. These are the small stocks. These are tiny stocks that represent the heart and soul of America 2.0. This is where the innovation happens.

P.S. We are entering the most exciting era of the stock market I’ve ever seen … a period where America 2.0 companies will continue to accelerate and dominate at an unprecedented speed. Need proof? Look no further than my Extreme Fortunes research service.

Right now, those readers are making an absolute killing. As we speak, we’re sitting on eight open triple-digit winners … totaling more than 1,600%.

I’m so excited about what’s ahead for Extreme Fortunes readers, I’ve decided to make a big move — I’m offering access to this acclaimed research service to new members at the lowest price we’ve ever offered. Click here for all the details now! 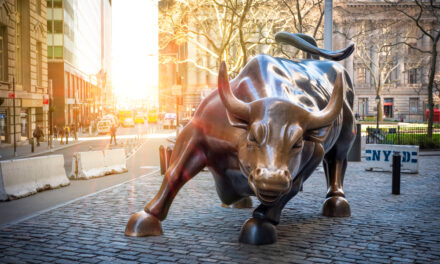 Contest! Are You Going to Be a Bold Profits Bull This Year?