When stock prices fall, people start to lose sight of the long term.

Here’s why you shouldn’t.

Look at life 150 years ago. Hey, just growing up in India, we lived in what seemed like a different world.

Cooking over a fire stove — saving the gas for special occasions. Even making a phone call was an expensive ordeal.

And I want to make it completely clear: these market moves are normal. Stock prices will rise and fall as we go through real changes.

We have to look at the long game. And right now, there are five mega trends that I believe — along with ARK Invest — will pay off long term.

I put together a worksheet to show the growth and returns from now to 2030. (See the results in today’s video.)

These high-return results aren’t for everyone. It’s for people with Strong Hands that stay in.

The promise of these technologies is real. I’ve seen it coming here from India. And I’m seeing it again.

I put out this tweet a few days ago. I am going to bring this up because a lot of times when stock prices fall people, in my experience, lose sight of the long term. They start to increasingly focus on the shorter and shorter term. Often by checking their accounts more and more often.

When prices were rising or stable, they were perfectly willing to wait for it, but now that prices are doing the reverse they want their stocks to be higher. They want it to happen instantly. Today I want to throw a firewall into this. I put up this tweet based on the Big Ideas conference Cathie Wood and ARK Invest recently held.

Look How Much The World Has Transformed!

We call it America 2.0. We expect it to come and completely upend the way life is lived. Certainly in America, most parts of the world, and completely transform life as we know it. I recently saw a video on YouTube that showed a bit of what life was like in the 1800s pre Industrial Revolution.

That’s the kind of change I believe is going to unfold over the next 5, 10, 15, 20, 30 years. If you watch this video, that life which was about 150 years ago, was so difficult. They spent half an hour lighting a fire. The fire was the most critical aspect of running a home.

They cooked using kettles that were hung in the fireplace. They made their own butter. They made their own soap using oil that was left over from cooking fat. It was an extraordinary laborious life. Once machines came, whether it be steam engines or motors of any kind, a lot of those things were mechanized and that human labor went away.

While it may seem far fetched today to compare our life today to life in the 1800s, just think in 100 years where we have come. No one makes soap at home. No one cooks over a fireplace with kettles. I can say personally, coming from India, when I grew up we cooked with a wood fire.

We had a gas stove, but gas in India was so expensive that we only used it occasionally. We didn’t want to pay to refill the gas. We saved it for special occasions. Telephone calls were a big deal. My parents lived in Dubai. You had to book a call. You had to reserve a line that was available between India and Dubai.

You would speak for something like three to five minutes. It was crazy expensive. Flights to go between Dubai and India, where my school was, was in the thousands of dollars. Even between that time and now, we’re talking 1980s to now, I can tell you pretty much everyone in India is using a gas stove.

No one is using firewood anymore. Maybe in very, very rural areas, but pretty much everyone has moved to a gas stove. Lots of things that were luxuries of that time, today, are all over India. I am bringing this up because most people are not thinking on this granular level about change.

However, having been through a few different worlds, my first world was really growing up in India, which was very primitive. It was very simple. We had a car, but a lot of things I take for granted today like electricity and running water were intermittent. They were not always available.

Transport was basic. We took a lot of buses. You walked a lot. From there I went to Dubai, which had a higher standard of living. We had more food. We had more options in terms of a number of things. Our car was nicer. Then I came to the United States, which was a step-function jump between was I was born into in India and what I had in the United States.

That’s what’s about to happen, expect it’s multiple step-function jumps. I put up this slide from something that Cathie Wood presented.

Let’s Take A Look Into ARK!

I said the chart from ARK Invest lays out how the stock market value will go to America 2.0 stocks, sometimes slowly and other times quickly.

I put that in because I get a barrage of hate mail. A lot of people looking to insult me, call me a fraud, a scam artist, one particularly interesting one was “a grifting clown.” I want to make it clear this is completely normal for us to see stock prices discount what is going to happen in the future slowly, sometimes quickly, sometimes in fits, starts and spurts.

In this tweet you will see that the slide from ARK Invest highlights five of the big technological shifts. 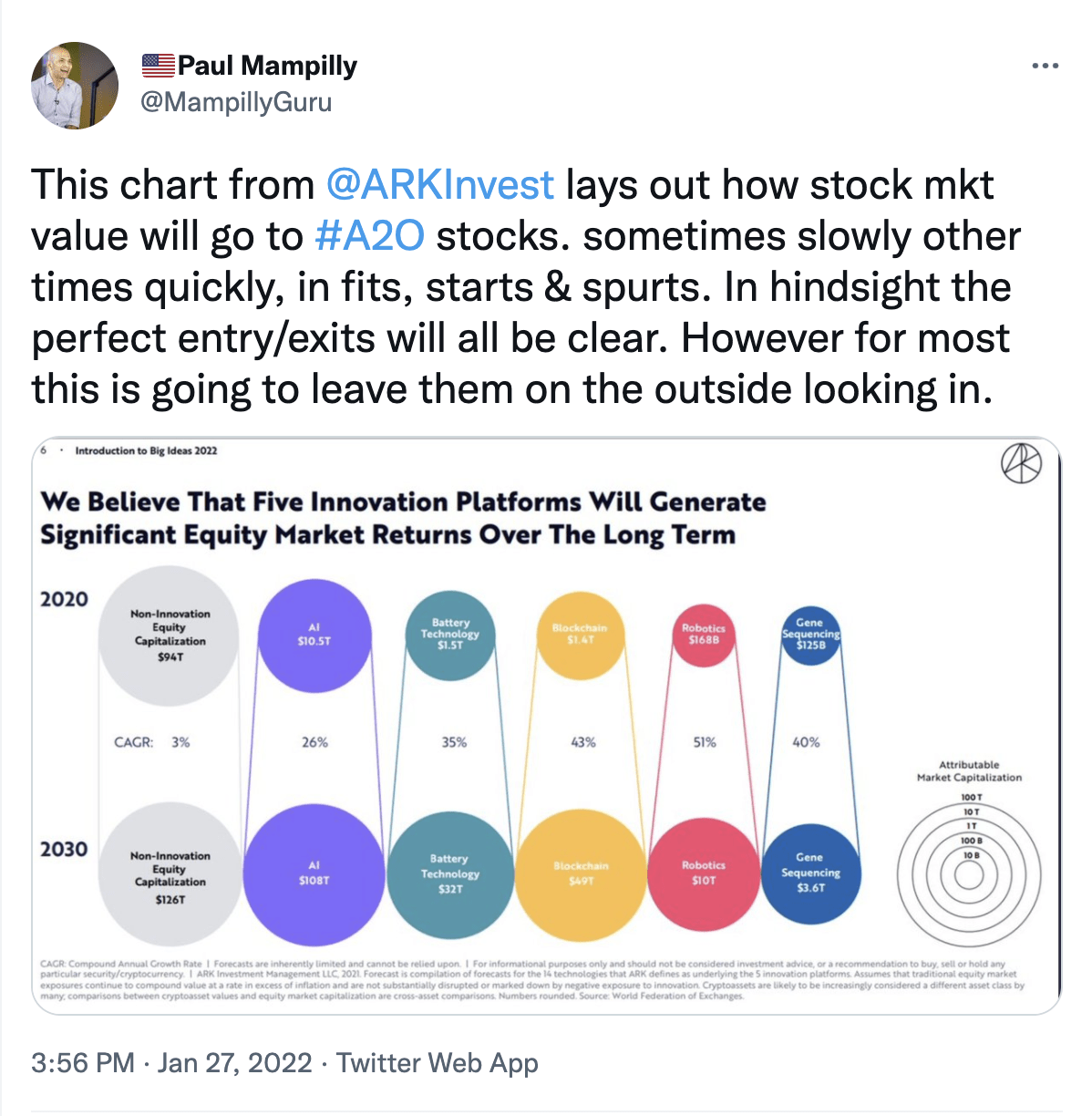 Step-function shifts that are happening. The first one is artificial intelligence (AI). It has a compound adjusted growth rate of 26%. Battery technology has 35%. Blockchain has a growth rate of 43%.

Just like what the Industrial Revolution did over 100 years ago. Life as it was is nothing like life as it was as it went through. Certainly, toward the mature periods of it where it had completely transformed life. It’s more or less what we have today. We have cars that are reliable.

What Could Happen In The Future?

We have houses that have all kinds of things that are beyond the wildest imaginations of what people imagined back then. To get a little granular, I wanted to run a projection. For the sake of assumption, let’s say ARK’s numbers are real and we can use them as an estimate of what is going to happen in the future.

I made this worksheet up. I put $10,000 starting in 2020 into AI assuming we have the right stocks and are in the right baskets to get the benefit that ARK laid out in that slide. Then $10,000 into batteries, blockchain, robotics, gene sequencing. A total of $50,000.

Then I compared it to ARK Invests estimate to what non-innovation stocks are going to generate. They estimate around 3%. I think that estimate is high. I would expect a loss for those stocks. 3% is what they have so I will go with it. You can see the compounded growth rates drive the values over time.

That’s a total of $1.56 million at the end of the 10-year period beginning 2020. The non-innovation portfolio at a 3% adjusted growth rate gets you to $67,000. A nice return, but nothing like $1.56 million. Why do we focus exclusively on America 2.0 and Fourth Industrial Revolution?

Where will the big wealth be made? It could come after a big crash. It could come in a period where nothing has happened. This is why we have our motto of strong hands and staying bullish, optimistic, positive. These compound adjusted growth rates are so high that it is well worth your while to stay in.

It happens in stair step fashion over time. It’s only somewhere near the initial stage where you tend to get a hockey stick moment of growth. However, the markets will anticipate that. I have used the example of Tesla before to indicate this. Tesla today is worth more than just about every car company on the planet.

The market is anticipating a period of dominance in electric vehicles (EVs), autonomy, energy storage that today they don’t have. They don’t have $20 trillion in sales, but the market is projecting forward and discounting the fact Tesla is going to dominate EVs, autonomous vehicles and storage of electricity as a result of capturing energy from the sun.

That’s how markets are. They will look forward. However, it will never be a straight line. There will be periods when prices get knocked down and knocked down hard. If you are out, my experience and all the research on investors is, once you persuade yourself of a negative, bearish and pessimistic point of view it’s the vie you tend to see.

You are always on the outside looking in. Only in hindsight is it going to be clear that you should have gotten in and gotten out. This is not something the vast majority of humanity is capable of. Nobody knows exactly when the market is going to move in one direction or the other.

That’s why we tell you all the time to be strong hands, be BOP and follow Rules of the Game to try to size your positions and risk for your own personal financial situation. That’s my video for this week. Come back next for another one. Until then, this is Paul saying bye.