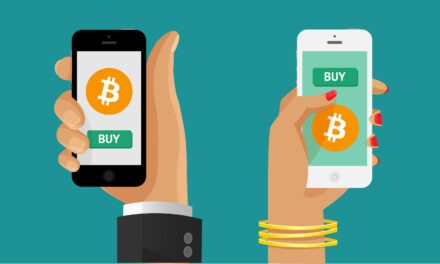 July 21 marked a turning point for the crypto market, as bitcoin (BTC) finally found its footing and jumped up by 8%.

As a result, Ethereum (ETH) rallied by almost 12% the same day.

Looking Ahead with Crypto Options

The first bullish sign is in the bitcoin and Ethereum options market.

Along with crypto prices, options demand for bitcoin and Ethereum began to surge on July 21.

After a couple months of open interest going straight down, we’re finally starting to get consistent buying once again. 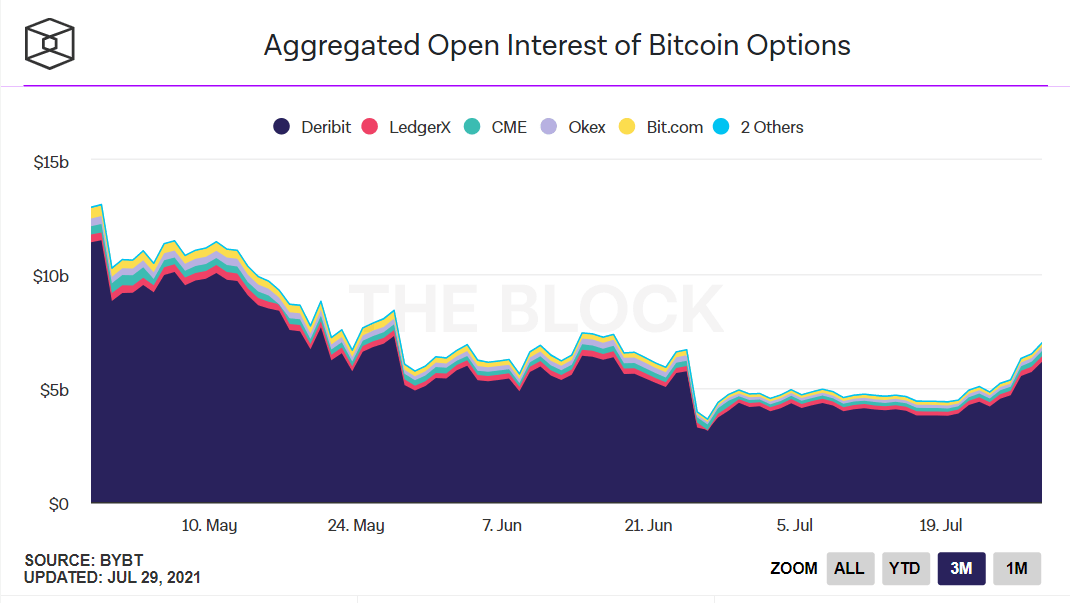 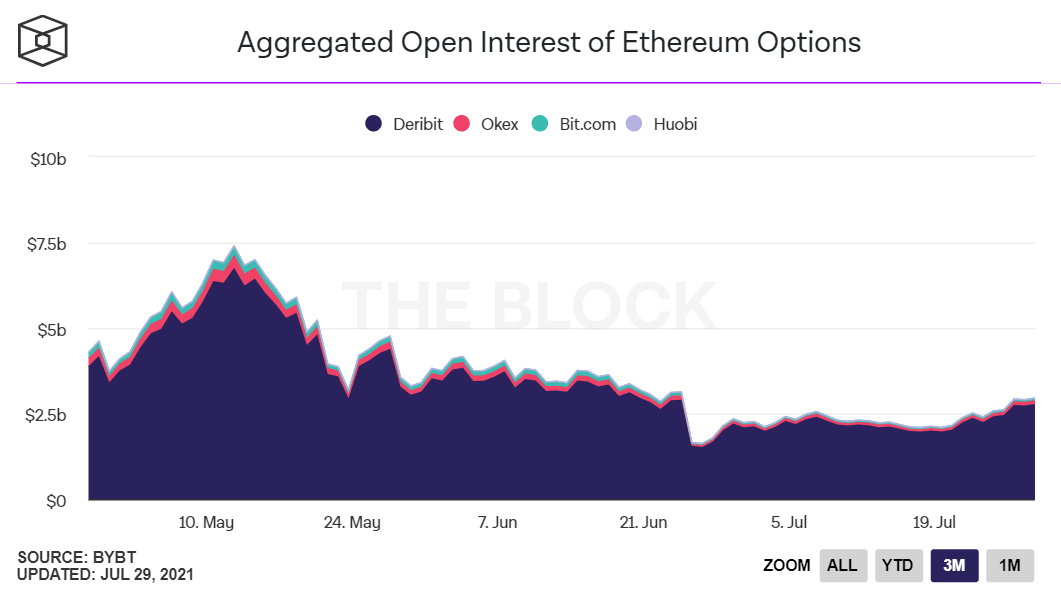 So, if this rise is truly bullish, we want to see more calls being bought than puts.

And that’s exactly what’s happening when looking at the put/call ratio: 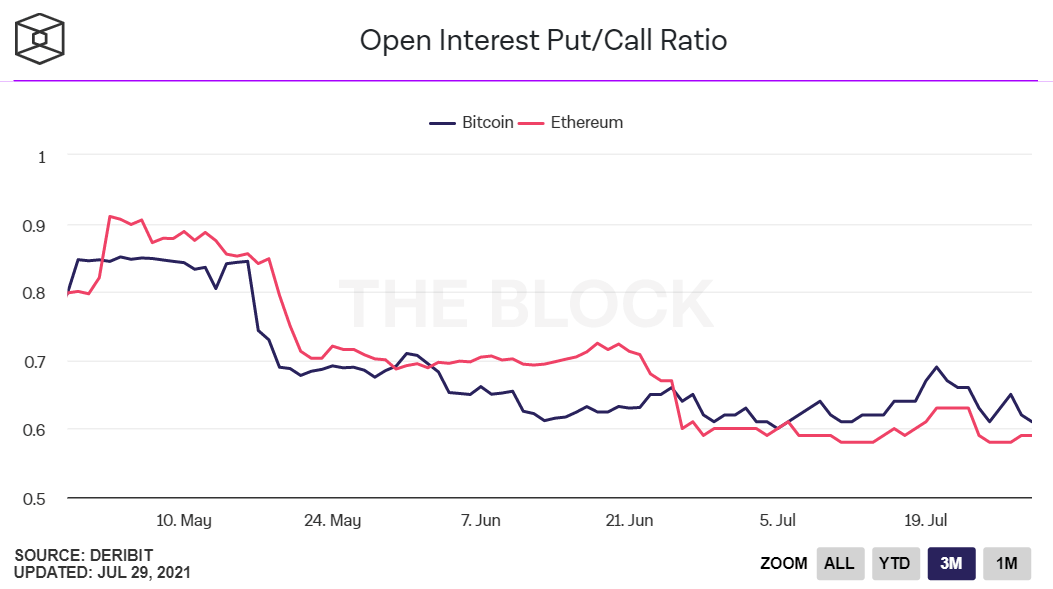 When the put/call ratio goes down, it means more calls are being bought.

And we can see here that the ratios for bitcoin and Ethereum had already been trending down for the past few months.

However, two things stand out to me:

I believe there’s very bullish sentiment in the market, as people are placing much larger options bets on bitcoin and Ethereum going up in the near future!

The second bullish sign for bitcoin is the decrease in the discount for the Grayscale Bitcoin Trust (OTC: GBTC), which represents GBTC’s ownership of bitcoin.

Grayscale is the world’s largest crypto fund manager, and its bitcoin trust currently holds almost 3.5% of all bitcoin ever mined.

This is where high net worth individuals and institutions go to ensure their bitcoin is secure, and in return, the investor or institution gets shares of GBTC.

But here’s the catch — those investors are not able to sell their GBTC shares for six months.

However, that also meant a surge of potential selling six months later, as investors could now unload their GBTC shares.

It’s also possible that this caused some of the selling pressure we’ve seen over the past few months.

As a result, GBTC’s shares have been trading below the value of the bitcoin “owned” per share:

On February 4, six months after Grayscale’s buying surge began, GBTC shares were trading at a 6.75% premium to their underlying bitcoin shares.

Many people, including myself, saw that as a good deal, considering the premium had mostly hovered between 10% to 30% for much of 2019 and 2020.

However, that premium soon turned into a discount, which had never happened in GBTC’s six-plus-year history!

And although GBTC’s been trading at a discount since March 2, things are starting to look much more bullish.

Why? There’s almost no more GBTC for Grayscale clients to sell.

As you can see here, the last big blocks of GBTC shares were unlocked in July:

So, what does this mean for GBTC’s future?

Well, this is a classic “sell the rumor, buy the news” scenario that plays out with big fear-oriented stories.

Most investors who use Grayscale have a very long-term approach to investing, and they aren’t going to sell their GBTC shares at a discount just to get rid of them.

So, it’s bullish that we’re not seeing GBTC being sold heavily like we were before.

Also, investors are now taking advantage of this discount, as they see bitcoin moving up and want exposure.

Not only does GBTC give them exposure to bitcoin at a discount, but they can also buy it in a tax-advantaged account — something bitcoin is currently lacking.

Ultimately, GBTC can serve as an extra gauge for bitcoin demand.

As a result of this demand, we’ve seen GBTC’s premium rapidly disappear over the past 10 days.

On July 20, GBTC shares were trading at a 14.49% discount. But yesterday, that discount had been diminished to just 5.68%, and I believe it won’t be long before it’s at a premium again.

Overall, I’m excited to see what the future holds for bitcoin, Ethereum and the rest of the crypto market as the rebound continues to move forward. 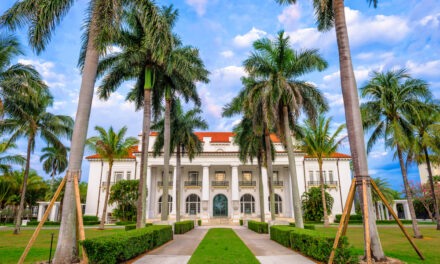